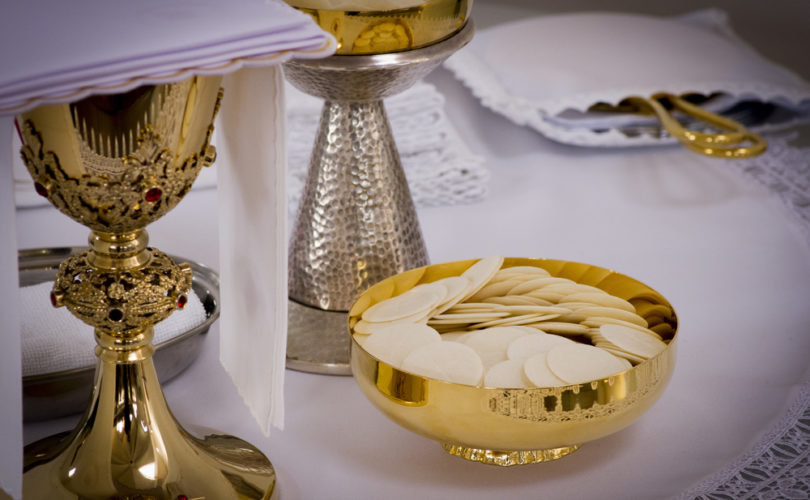 NEWARK, NJ, September 27, 2012 (LifeSiteNews.com) – On Tuesday Newark Archbishop John J. Myers released a pastoral letter calling on Catholics, especially Catholic politicians, who do not accept the teaching of the Church on marriage, to “in all honesty and humility refrain from receiving Holy Communion.”  The Archbishop said that “to continue to receive Holy Communion while so dissenting would be objectively dishonest.”

The New Jersey prelate made a distinction between those struggling at times unsuccessfully against sin, and those who would willingly oppose Church teaching.

He said: “there is a difference between trying to live the whole Gospel while repenting of failures along the way, and not even trying. Worse still is the attempt by some to alter or pervert the authentic teaching of the Church, which is the true teaching of Christ.”

Archbishop Myers warned, “Jesus had very harsh things to say to those whose false teachings led others, especially the young, astray.”

The 16-page letter is a robust teaching on marriage and family which notes that divorce and contraception have paved the way for confusion in the Church and the world around homosexual ‘marriage’.

“The widespread use of contraception in sexual relations makes it difficult for young people today to grasp the intrinsic meaning and relation between sexual activity and procreation that has always been one of the fundamental meanings of marriage,” says the Archbishop.

Archbishop Myers explains that he is Biblically bound to preach the truth ‘in season and out of season’ and advises all the faithful to do likewise. “Woe to me if I do not proclaim the gospel,” he cited.