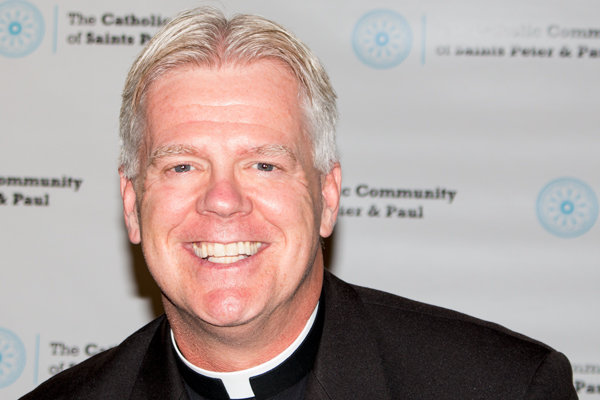 NEW JERSEY, September 2, 2016 (LifeSiteNews) — A Catholic archbishop has suspended an openly homosexual priest in the wake of his ongoing support for LGBT causes.

Father Warren Hall tweeted Wednesday that Newark Archbishop John Myers suspended him from priestly ministry, meaning he is no longer permitted to publicly offer Mass or present himself as a priest.

Sadly, my differences with my bishop continue. Today he has suspended me from priestly ministry. @Pontifex's Reform are taking too long.

Hall told Religion News Service that Myers suspended him for supporting a former Catholic high school employee who was fired for being in a same-sex “marriage.” The woman, Kate Drumgoole, is suing Paramus Catholic High School. Earlier this week, Myers released a letter supporting the school.

“It seems that many have equated, mistakenly, the Church’s position of welcoming sinners (for we are all sinners) with the notion that we accept teaching and lifestyles contrary to the principles of our faith that can create scandal in our Church,” the archbishop wrote. “Much has been said in recent days about respect, diversity, and mercy. … For decades I have taught and written that the Church welcomes everyone and invites everyone to participate in the life of the Church to the degree that they honestly can, while sincerely respecting the teachings of the Church. The invitation to join the life of the Church does not include an invitation to alter or redefine what the Church believes and teaches, nor is it an invitation to allow others to define the identity, mission and message of the Church.”

Myers “doesn't believe you can be gay and Catholic,” Hall said.

Hall announced he is gay last year after claiming Myers removed him as Director of Campus Ministry at Seton Hall University for supporting same-sex “marriage.” He had posted on Facebook in support of the pro-same-sex “marriage” campaign NOH8. The diocese said Hall’s assignment as campus minister was scheduled to end; he was subsequently assigned to be parochial vicar at two Hoboken parishes.

Over the past year, the priest has tweeted numerous times in support of LGBT causes. One of the images he tweeted was of Pope Francis and a rainbow flag, a symbol of the gay rights movement. On the pontiff’s birthday, Hall wrote, “Let's pray that he lives long enough to replace every bishop who doesn't agree with him!!!”

In another tweet, Hall posted a photo of himself wearing a shirt with a rainbow emblem on it.

Happy B'day Pope Francis. Let's pray that he lives long enough to replace every bishop who doesn't agree with him!!! pic.twitter.com/KOzgMtZ8O4

Parents should embrace their lgbt sons/daughters in a way that treasures them for what they are, gifts from God! https://t.co/9gW8bfR2Lp

Reminder about tonight @CityofHoboken event. Join after at @houseofque. Donation will be made to Hudson Pride Center pic.twitter.com/FPygmvq4dg

Pride Wknd can be a tough time for those in Recovery. Join us for a weekend of Sober Events. Msg me for more info. pic.twitter.com/JFUcZtyaTk

“Stop Confusing the People by Being Yourself!” Oh, that was the reason!! @gaypriests pic.twitter.com/OAkS6DsDPp

Archdiocese of Newark Communications Director James Goodness told LifeSiteNews via email that this matter “is a personnel issue” and the Archdiocese is not currently accepting interviews about it. He referred LifeSiteNews to a statement he gave Thursday:

Every Catholic priest promises to be reverent and obedient to his bishop. A priest's actions and statements always must be consistent with the discipline, norms and teachings of the Catholic Church. When they are ordained, priests agree to accept the bishop's judgment about assignments and involvement in ministry.