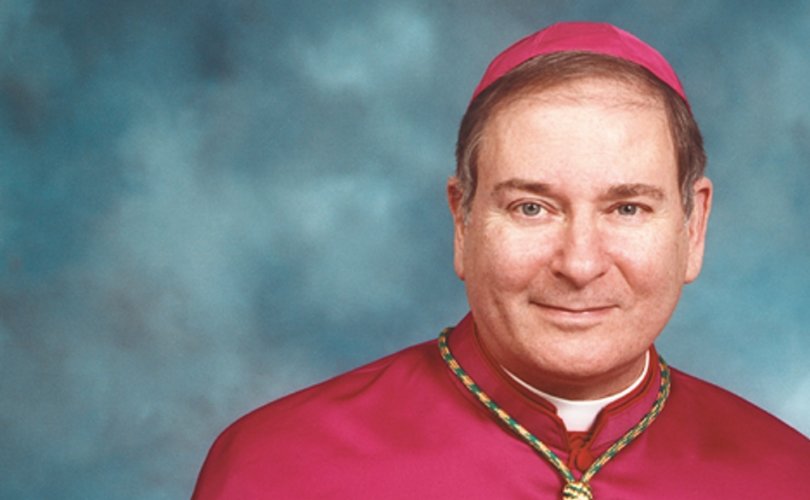 July 26, 2019, 5:25 PM EST update: Bishop Serratelli's lawyers have threatened LifeSiteNews for our report below. They have also provided comments on our report. Read all about this in our July 26 report: Bishop threatens LifeSite over report of his alleged cover-up of priest’s gay sex abuse.

PATERSON, New Jersey, July 24, 2019 (LifeSiteNews) ― Catholics in Passaic County, New Jersey have been furious with their bishop for over a decade because they believe he has been covering-up for and even promoting a priest who is a serial abuser of young men.

Church Militant presented a story last week alleging that Bishop Arthur J. Serratelli, the ordinary of the Diocese of Paterson since 2004, has refused to discipline Fr. Hernan Arias, the pastor of St Margaret of Scotland Parish in Morristown, NJ, despite multiple accusations of sexual misconduct against him.

Arias, who remains “a priest in good standing” for the Diocese of Paterson, has been accused of intoxicating and attempting to rape an 18-year-old boy in 1985, of subsequent public drunkenness and an attempt to seduce a seminarian during a trip to Israel, and of having admitted to approaching a male prostitute in Paterson, allegedly while impersonating a police officer.

LifeSiteNews has seen ten documents from the case, redacted to preserve the anonymity of Church Militant’s sources. The material dates from March 2, 2006 to April 24, 2007. It includes letters from the victim of Arias’ alleged sexual assault to Bishop Serratelli, Serratelli’s responses to the victim, and the victim’s subsequent letter to Archbishop Pietro Sambi, then the Papal Nuncio to the United States.

These documents also include letters from a retired priest writing on the victim’s behalf to Serratelli and then to the Nuncio, requesting a meeting to discuss the allegations against Arias. They also include a letter from Arias’ parishioners to Serratelli alleging they have evidence that their priest has solicited multiple young men for homosexual practices.

The story seems to begin in 1985, when the complainant was an 18-year-old boy discerning a vocation to the priesthood. He was befriended by Arias, then a recently ordained priest, and met with him. On two occasions, Arias supplied the young man with alcohol. On the second of these binges, the complainant alleges, Arias attempted to anally rape him.

“For many years I kept this encounter a ‘secret’, although it impacted me on many levels,” the man wrote to the Nuncio in 2006.

“In 2005, I learned that Fr. Hernan Arias had been appointed Director of Vocations for the Diocese of Paterson, and I could keep my silence no longer.”

The complainant believed from his own experience, and from information he received from his former parish priest, that Arias would use his position to prey upon other young men. He therefore wrote out a formal statement about his alleged abuse, and his former parish priest, now retired, included it in a dossier of information about Arias, which he sent to Serratelli.

According to the correspondence between this layman, now a married father of two, and Serratelli, six months went by without a personal response from the bishop. The alleged victim subsequently told the Papal Nuncio that he received nothing but a single phone call from the Passaic County Prosecutor’s office.

In response to the layman’s 2006 letter complaining of this neglect, Serratelli said that he hadn’t acknowledged the letter because it was addressed to neither him nor the diocese, and that it had been read as a description of “a consensual relationship between two (2) adults in which alcohol was involved.”

“…As you know, you and the priest had prior outings involving alcohol,” the bishop wrote.

Meanwhile, the complainant’s account had been investigated by the Prosecutor’s office, Serratelli informed him, and the case against the priest had been “closed out”, for “no criminality” had been detected.

“As a result of these conclusions by law enforcement, Father remains a priest in good standing in the Roman Catholic Diocese of Paterson,” Serratelli wrote.

The alleged victim wrote back thirteen days later to underscore that his “sexual encounter” with Hernan Arias had not been consensual and was therefore rape. Although it was too late to prosecute the priest for the crime, it was not too late to censure him, he noted.

The complainant also said that he doubted the majority of the parishioners in the diocese would agree with Serratelli’s estimation that Arias should be “a priest in good standing.” A year later, Arias’ own parishioners wrote to say that they did not.

The layman next wrote to Archbishop Sambi, telling him the whole story, including Serratelli’s lack of pastoral sensitivity. He asked the Nuncio to have Arias removed from his position as Director of Vocations and as pastor of St. Margaret of Scotland Church and to censure Serratelli and his staff for their mishandling of the case.

'You have given permission to priests to engage in misconduct with impunity.'

The complainant’s former parish priest also wrote to Archbishop Sambi to say that “the appointment of a priest by our bishop to Director of Vocations who has had a history of sexual misconduct is beyond my comprehension.”

Five months later, the retired priest wrote again to the Nuncio, requesting a meeting. He enclosed his first letter and said that he had heard from men who were interested in the priesthood but would not speak to the Director of Vocations “for obvious reasons.”  The retired priest assured the Nuncio that Arias’ sexual misconduct was an open scandal and Serratelli’s refusal to handle the matter was “a greater scandal.”

“Unfortunately, his ‘friendship’ with Fr. Arias seems to preclude his ability to deal with it objectively,” he wrote.

Early in the next year, Arias stepped down from his role as Director of Vocations. According to a February 8, 2007 article in The Beacon, the Diocese of Paterson’s official newspaper, the priest had asked Serratelli’s permission to return to a full-time role as pastor at St. Margaret of Scotland. The bishop praised the “tireless work” of Arias and others, giving them partial credit for the marked increase in vocations in the diocese.

This public affirmation of Arias’ work as a vocation director inspired two letters of protest, one from the retired priest and one from Arias’ parishioners at St. Margaret of Scotland Church.

“The announcement of Hernan Arias’ ‘resignation’ as director of vocations accompanied by your words of praise and gratitude has left speechless those who know the truth of what occasioned his dismissal,” wrote the champion of the alleged victims.

The clearly furious priest reminded the bishop of Hernan’s most recent scandal, which allegedly included public drunkenness and sexual misconduct on a trip to Israel, witnessed by several seminarians. He asserted that the priest would have been charged with a criminal offense had his most recent victim “had the courage to report [him] to the Israeli authorities.”

“In effect, you have protected and promoted man you have known for years to be a sexual predator,” the retired priest wrote.

“…You have gone on record once more to priests and seminarians as a bishop who condones sexual misconduct,” he continued.

“The word scandal is apt. To be scandalized is not merely to be shocked by the immoral behavior of another. It is to pursue the same behavior. In effect, you have given permission to seminarians and priests to engage in sexual misconduct [with] impunity.

The parishioners, writing two months later, said that they had evidence that Arias had solicited young men in and out of Paterson. Reflecting on the scandals rocking the Church, they said that they did not want one “to engulf St. Margaret’s”. They had noticed that fewer and fewer people were coming to Mass there, and were worried that the situation would become even worse if their pastor’s misconduct became public knowledge before the bishop took action.

“It is difficult for us to understand why he is the pastor of a church that has young men in the congregation and seminarians [who] live in the rectory,” they concluded.

Church Militant indicated that there have been complaints about Serratelli’s own conduct with seminarians and that he is facilitating “a gay seminarian pipeline from South America to the United States.”

LifeSiteNews wrote to Bishop Serratelli inviting him to respond to the Church Militant story, but did not receive a reply.