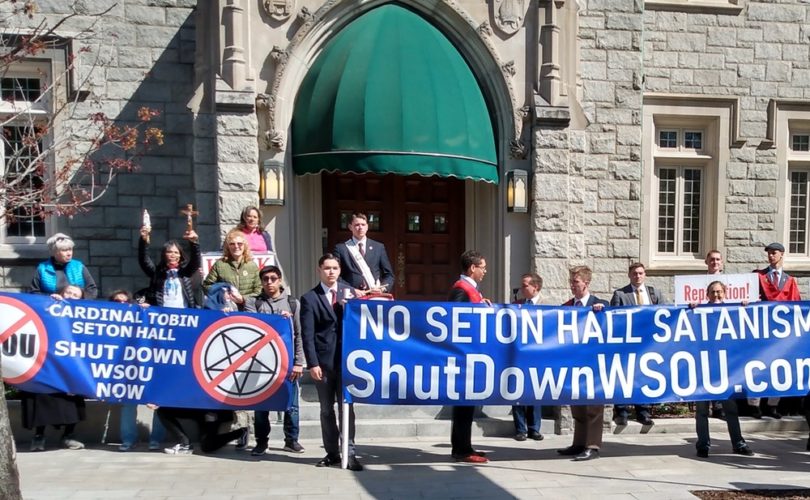 NEWARK, New Jersey, June 14, 2021 (LifeSiteNews) – Faithful Catholics will gather on June 16 at 10:30 a.m. in front of the Newark's Sacred Heart Cathedral and the residence of Cardinal Joseph Tobin to demand he shut down a radio station regularly broadcasting Satanic music from the archdiocese’s Seton Hall University. The event is being organized by Shut Down WSOU and sponsored by The Lepanto Institute.

For several months, local Catholics have met to pray the rosary in front of the university campus to protest the openly anti-Christian and Satanic music from the station WSOU.

A rosary of reparation and a Marian procession will take place on Wednesday, June 16, from 10:30 a.m. to 12:30 p.m. at Sacred Heart Cathedral, (Clifton Avenue & 6th Avenue, Newark). Participants will gather will opposite the cathedral in Branch Brook Park.

John Yep of CatholicVote.org, Michael Hichborn of the Lepanto Institute, and radio host Jesse Romero are slated to speak.

“Among our lineup of notable speakers, a very special guest, to be announced at the event, will be a great inspiration to the faithful,” Richard Smaglick of Shut Down WSOU told LifeSiteNews. “We are also blessed to have with us a first-class relic of Pope St. John Paul the Great.”

The rally will take place on the first day of the USCCB’s annual Spring General Assembly. The bishops are set to discuss whether pro-abortion politicians should be denied Holy Communion in accordance with canon law. Notably, Tobin and every auxiliary bishop (with the exception of one retired auxiliary bishop) from the Archdiocese of Newark last month added their signatures to a letter opposing the bishops discussing the issue.

Shut Down WSOU has records of over 100 times that these songs have aired at the station, and that number continues to grow.

Among recent evidence, “Deliverance” by Opeth that has been broadcasted both in March, April, and June of this year, includes these lyrics:

Tells me what to say.

This selection also contains the phrase, “When driven into sin, Your salvation’s found in a sinner’s deed.”

Violence towards children is also promoted in many songs. “Skulls” by The Misfits, which aired as recently as April 9 of this year (and at least 48 other times on WSOU) calls for the murder of young girls and the bathing in their blood. “Hack the heads off little girls, and put ’em on my wall,” says one verse.

The station has regularly aired material from the openly Satanic band Electric Wizard, including “Venus in Furs” from their “Black Masses” album.  The song references and depicts Satanic anti-Masses in various forms.

My Venus in furs

To your leather boots I offer prayers

You rise like a cobra, evil dressed in furs

But your venom, a black drug inside my veins

I need it everyday to take away the pain.

Recorded evidence of all of the examples given in this article can be viewed on Shut Down WSOU’s website here.

Smaglick makes a connection between WSOU and the university culture that was being created under the leadership of ex-Cardinal McCarrick. He also says that the McCarrick scandals have affected the Church locally but also nationwide. “We see now a Church that has been disgraced by the fundamental dysfunction within it that allowed McCarrick to become, arguably, the most powerful prelate in America.”

Michael Hichborn told LifeSiteNews that “the legacy of Theodore McCarrick is perverse, grotesque and scandalous, and it has gone on long enough. These broadcasts began when he went to Newark, and it's time for them to end.”

Hichborn also stated that the radio station “is quite possibly the most public and overtly Satanic activity conducted under the authority of a sitting cardinal in the world.”

“We simply cannot allow this to continue,” Hichborn said, “and if the Cardinal won’t do anything to stop it, we must turn to Our Lady and ask her to.”

This “is a pivotal moment in the history of the Church,” said Smaglick. “We face the question as to whether our bishops will capitulate to the sinful ways advancing ever more aggressively in the world, or instead move courageously to restore the integrity of the Church and its mission.”

He added that the laity must answer the silence of bishops, amid the Satanic music coming from a so-called Catholic school, with “unity in fidelity to Christ. Let us stand and pray together in Newark at Sacred Heart Cathedral on June 16 for the end of Satanic broadcasting from Seton Hall and for the restoration of the Church.”

For more details regarding this rosary rally, visit ShutDownWSOU.com or email the organizers at [email protected]