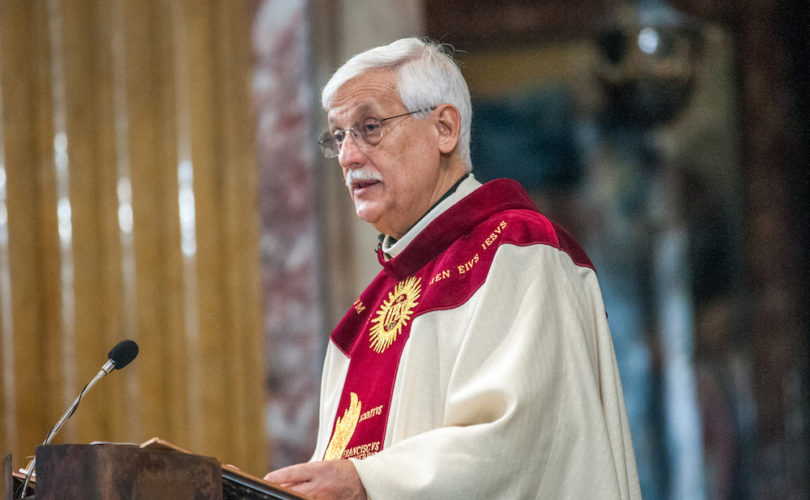 February 22, 2017 (LifeSiteNews) — The new head of the Jesuit order, one of the most powerful figures in the Catholic Church worldwide, has claimed in an interview that the words of Jesus against divorce are “relative” and must be “discerned” according to the “conscience” of each individual.

Fr. Arturo Sosa Abascal made these statements in an interview with Giuseppe Rusconi published February 18 on the blog Rossoporpora. The relevant portions of the interview, translated by Matthew Sherry for Vatican expert Sandro Magister, appear below.

Abascal’s comments are directed at Christ’s words in the Gospel of Matthew, in which He reveals God’s plan for marriage “from the beginning.”

Have you not read that he who made them from the beginning made them male and female, and said, ‘For this reason a man shall leave his father and mother and be joined to his wife, and the two shall become one’? So they are no longer two but one. What therefore God has joined together, let not man put asunder. […] For your hardness of heart Moses allowed you to divorce your wives, but from the beginning it was not so. And I say to you: whoever divorces his wife, except for unchastity, and marries another, commits adultery; and he who marries a divorced woman, commits adultery.

Q: Cardinal Gerhard L. Műller, prefect of the congregation for the doctrine of the faith, has said with regard to marriage that the words of Jesus are very clear and “no power in heaven and on earth, neither an angel nor the pope, neither a council nor a law of the bishops has the faculty to modify them.”

Abascal: So then, there would have to be a lot of reflection on what Jesus really said. At that time, no one had a recorder to take down his words. What is known is that the words of Jesus must be contextualized, they are expressed in a language, in a specific setting, they are addressed to someone in particular.

Q: But if all the words of Jesus must be examined and brought back to their historical context, they do not have an absolute value.

Abascal: Over the last century in the Church there has been a great blossoming of studies that seek to understand exactly what Jesus meant to say… That is not relativism, but attests that the word is relative, the Gospel is written by human beings, it is accepted by the Church which is made up of human persons… So it is true that no one can change the word of Jesus, but one must know what it was!

Q: Is it also possible to question the statement in Matthew 19:3-6: “What therefore God has joined together, let not man put asunder”?

Abascal: I go along with what Pope Francis says. One does not bring into doubt, one brings into discernment. . .

Q: But discernment is evaluation, it is choosing among different options. There is no longer an obligation to follow just one interpretation. . .

Abascal: No, the obligation is still there, but to follow the result of discernment.

Q: However, the final decision is based on a judgment relative to different hypotheses. So it also takes into consideration the hypothesis that the phrase “let man not put asunder…” is not exactly as it appears. In short, it brings the word of Jesus into doubt.

Abascal: Not the word of Jesus, but the word of Jesus as we have interpreted it. Discernment does not select among different hypotheses but listens to the Holy Spirit, who – as Jesus has promised – helps us to understand the signs of God’s presence in human history.

Q: But discern how?

Abascal: Pope Francis does discernment following St. Ignatius, like the whole Society of Jesus: one has to seek and find, St. Ignatius said, the will of God. It is not a frivolous search. Discernment leads to a decision: one must not only evaluate, but decide.

Q: And who must decide?

Abascal: The Church has always reiterated the priority of personal conscience.

Q: So if conscience, after discernment, tells me that I can receive communion even if the norm does not provide for it…

Abascal: The Church has developed over the centuries, it is not a piece of reinforced concrete. It was born, it has learned, it has changed. This is why the ecumenical councils are held, to try to bring developments of doctrine into focus. Doctrine is a word that I don't like very much, it brings with it the image of the hardness of stone. Instead the human reality is much more nuanced, it is never black or white, it is in continual development.

Q: I seem to understand that for you there is a priority for the practice of the discernment of doctrine.

Q: But it can reach conclusions different from doctrine.

Abascal: That is so, because doctrine does not replace discernment, nor does it the Holy Spirit.