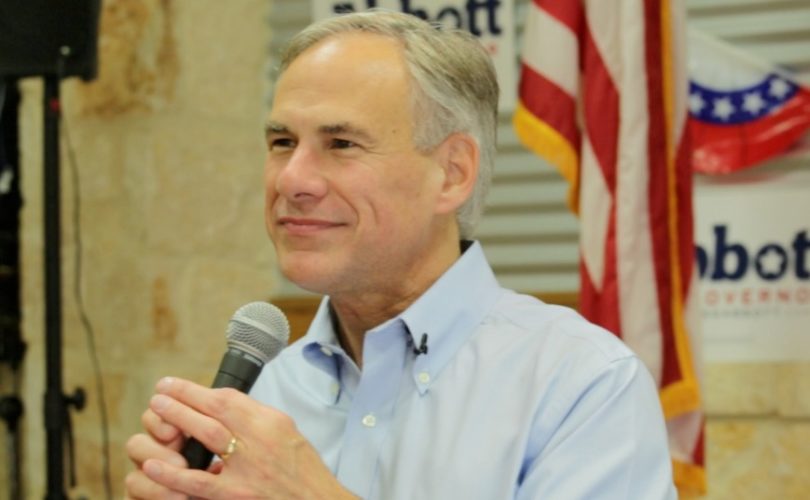 June 16, 2017 (LifeSiteNews) — Texas Gov. Greg Abbott yesterday signed into law a bill that protects Christian adoption agencies from being forced to place children in homosexual-led households that intentionally deny the child a mother or a father.

HB 3859, the Freedom to Serve Children Act, allows faith-based adoption and foster care organizations to receive state funding without fear of legal retribution for declining to place children in homosexual-led households. Other conscience objections such as placing children with single or divorced adults are also covered.

“We are very grateful to Governor Abbott for signing HB 3859, and for all of the hard work of Rep. James Frank and Senator Charles Perry to pass this bill that will allow faith-based foster care and adoption agencies in Texas to serve the children of Texas while maintaining our faith teachings,” said Jennifer Carr Allmon, executive director of the Texas Catholic Conference of Bishops. “Our ministries throughout the state are actively seeking new ways to be of service to the children of Texas and welcome all people of good will to join us in these endeavors.”

The Supreme Court’s imposed legalization of national homosexual “marriage” in the 2015 Obergefell v. Hodges ruling, combined with spreading “sexual orientation” and “gender identity” nondiscrimination laws, has threatened the freedom of Catholic and religious adoption agencies to operate according to their own teachings.

In Boston, Illinois, Washington, D.C., and San Francisco, Catholic adoption agencies closed themselves down rather than be forced by the state to put children in homosexual-led households.

Robert Oscar Lopez, a leader in exposing the dangers of homosexual parenting as one who himself was raised by lesbians, hailed Abbott’s signing of HB 3589 as “wonderful news.”

Lopez, director of Texas Mass Resistance and a Humanities professor at Southwestern Baptist Theological Seminary, told LifeSiteNews that the new law will help “open up a national conversation” on the homosexual parenting issue.

Lopez said nationally, the issue of homosexual adoption and “gay parenting” has been “poorly debated” by pro-family groups, who tend to fall back on the simple talking point, “Children need a mom and a dad,” because they are reluctant to discuss the special risks associated with homosexual-led households.

Even worse, after Obergefell, which stripped states of their right to preserve national marriage in the law, too many social conservatives gave up altogether arguing against homosexual adoption, he said.

“We’ve never had a full national debate on gay parenting,” Lopez said. “There are very specific problems” with homosexual parenting because the adult homosexuals “are hooked into the [LGBT] community with all its problems.”

For example, he said, children in homosexual-led homes often “are dragged to salacious gay pride parades,” which are highly sexualized and vulgar, and therefore a very inappropriate environment for impressionable children.

Lopez said HB 3589 will help save many kids from being placed in same-sex households because it frees up faith-based agencies to participate who were previously reluctant due to Obergefell and the encroachment of the LGBTQ agenda.

“We don’t want to place children in these homes unless it is absolutely necessary — and it is almost never necessary,” he told LifeSiteNews. “It should be exceedingly rare, but gay activists want to make it common.”

Victory for children and religious liberty

The pro-family group Texas Values hailed Gov. Abbott for signing HB 3589, which it called “a major victory for children and for religious liberty in Texas.”

“One-fourth of all foster care agencies in Texas are faith-based, but there has been a trend nationally of religious placement organizations closing as the result of being forced to deny their beliefs,” it said in a release. “Because of the crisis in state-run foster care, faith-based providers have been asked to do more to help care for foster children. Many faith-based providers want to do so, but before HB 3859, state law did not protect them from being targets of grant discrimination or litigation.”

Jonathan Saenz, president of Texas Values, said, “Texans are now free to recruit foster families and place children with loving families … HB 3859 ensures that there’s a place at the table for everyone at a time when Texas children need everyone at the table.”

HB 3859 was opposed by liberal-leaning adoption groups, the ACLU of Texas and various LGBTQ lobby groups, including the Human Rights Campaign (HRC), the world’s most influential gay-lesbian-bisexual-transgender-“queer” organization.

“State contractors who provide child welfare services can discriminate against qualified same-sex couples seeking to care for a child in need — including LGBTQ couples, interfaith couples, single parents, married couples in which one prospective parent has previously been divorced, or other parents to whom the agency has a religious objection,” stated HRC, which leans heavily Democratic and has declared itself part of the anti-Trump “Resistance.”