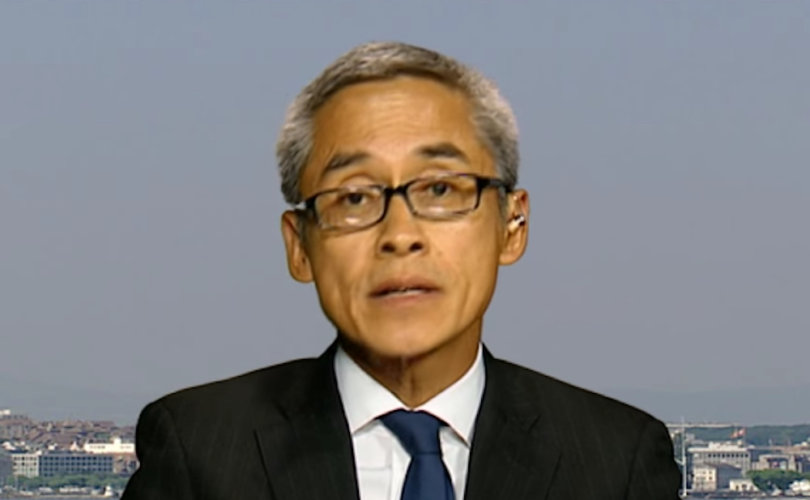 December 21, 2016 (LifeSiteNews) — The United Nations voted 84-77 this week not to eliminate the newly established LGBT czar position – to the disappointment of mostly African and Muslim nations, India, Russia, and China — and at the urging of President Obama’s outgoing Ambassador to the U.N. to retain Vitit Muntarbhorn.

In Monday’s vote, roughly the same countries that previously tried to thwart the U.N. LGBT envoy in a Nov. 21 vote failed to derail it again — mostly African and Muslim-dominated states, Russia, some in Latin and South America, and the Caribbean. There were 16 abstentions.

Notably, the world’s two largest nations, China and India, did not vote to affirm Muntarbhorn’s LBTQ “Expert” position. China voted to curtail the envoy’s work and India abstained. Russia and several African nations said in November that they would not cooperate with Montarbhorn or recognize his authority.

According to a U.N. article, Muntarbhorn said he will focus on “five key areas which would drive [pro-LGBTQ] change:”

Note that these “key areas” range far outside the category of anti-homosexual violence, which is roundly condemned in the West by homosexual activists and pro-family advocates alike. Worldwide attention has been drawn to Muslim zealots carrying out horrific executions of suspected homosexuals in the name of sharia law.

Fighting the elastic concept of anti-LGBT “discrimination,” however, is another matter. It is so often construed by homosexual and transgender activists and their allies to mean opposing any law, policy or even religious teaching that does not treat homosexualism and transgenderism as morally and legally “equal” to God-given natural sex, man-woman marriage and family.

Samantha Power, the U.S. Ambassador to the United Nations, condemned the second serious maneuver to block the U.N. LGBT czar position. In a statement, Power characterized as a mere technicality the objection of African nations that “there is no international agreement on the definition of the concept of ‘sexual orientation and gender identity.’”

“That is patently false,” Power declared. “The issue of violence or discrimination based on sexual orientation and gender identity is well established and well understood. It has been referred to in resolutions and statements adopted by the Human Rights Council, the UN Security Council, and the UN General Assembly.”

Countries used legal excuse to try delaying UN #LGBTI expert. Real reason?Many believe it's ok to discriminate against ppl for who they love

She continued in her statement: “In reality, this [anti-LGBT envoy] amendment has little to do with questions around the definition of sexual orientation and gender identity. Instead, this amendment is rooted in a real disagreement over whether people of a certain sexual orientation and gender identity are, in fact, entitled to equal rights. And it is being driven by a group of UN Member States that believe it is acceptable to treat people differently because of who they are or who they love.”

In her statement, Power claimed that the U.S. views discrimination based on “sexual orientation” and “gender identity” as “no different from discriminating against people for the color of their skin” or their sex or nationality.

Ironically, though, the main opposition to the Obama administration’s viewpoint on LGBT rights abroad comes from Africans, who believe his strong LGBT push actually harms the fight against racism.

Botswana’s U.N. Ambassador, Charles Ntwaagae, who led the campaign by the 54-nation U.N. Africa Group to stop the International LGBT Expert post, said the group was concerned “non-internationally agreed notions such as sexual orientation and gender identity are given attention, to the detriment of issues of paramount importance such as the right to development and the racism agenda.”

But Powers asserted: “This is not an issue of the North trying to impose its values on the South, it is an issue of respecting the dignity and human rights of all people, everywhere. That is what we mean when we say that LGBTI rights are universal human rights.”

However, in the U.S., too, African-Americans have bristled at the analogy between opposing laws recognizing homosexual behavior (“orientation”) and racism. The late Kenneth Hutcherson, a black man, famously said in opposing LGBTQ ideology and legalized homosexual “marriage:” “Don’t compare your sin to my skin.”

American social conservatives condemned the two separate U.N. votes confirming the international homosexual-transgender “expert” position as Western imperialism and a “bait-and-switch” tactic that exploits the legitimate problem of anti-homosexual violence to promote a much wider and nefarious pro-LGBTQ agenda.

Scott Lively, a leading critic worldwide of the LGBTQ agenda, said that forcing an LGBT “rights” envoy on unwilling states “is representative of the absolute arrogance of global leftist elites and their willingness to destroy Judeo-Christian civilization.”

Lively told LifeSiteNews that he recently returned from a 20-nation fact-finding tour “monitoring the global rebellion against the leftist elite agenda.” He said few in the West are acknowledging that underlying the populist revolt in so many nations — in addition to economic and immigration concerns — is tremendous resentment at Western elites for imposing an alien homosexual-transgender ideology on people, against the cultural and religious values of independent nations.

“Nobody talks about homosexual ‘marriage’ being forced down everybody’s throat,” said Lively, founder of Defend the Family International.

“So-called ‘homosexual rights’ are a newfangled invention that is still being hotly debated inside the United States, let alone in the more conservative countries around the world.  It is a debate worth having with respect and dignity for all. Yet some on the Left have declared the debate over and want to force their preferred policy views on everyone else. Their efforts are, in fact, hurting the cause of freedom overall, as we have seen with the trampling of our religious freedoms here in the United States.”

And Christian pro-family advocate Linda Harvey, founder and president of Mission America, looked forward to the end of President Obama’s global leftist LGBTQ crusade: “We understand the game that is being played at the international level, hopefully to end after the Obama administration ends,” Harvey said. “This has little to do with so-called violence against people involved in homosexual or transgendered behavior. It’s really about forcing countries to change long-existing laws upholding sexual morality and child welfare.”

She told LifeSiteNews: “This kind of cultural imperialism is an insult to high standards for families, children and the fervent desire on the part of many countries to maintain social order and stable marriages and families.”

Dr. Wayne West, Jamaica's most prominent pro-family human rights advocate and chairman of the Jamaica Coalition for a Healthy Society, issued the following statement to LifeSiteNews (Jamaica voted against the U.N. LGBT Envoy):

“Present laws and conventions correctly protect all persons from violence but discriminate against harmful behaviors. As such LGBT+ persons should be and are protected from violence by existing laws which should be enforced without prejudice. It is clear from the stated objectives of the LGBT expert, however, that his mandate extends well beyond protecting LGBT persons from violence to re-engineering society to enforce the affirmation of harmful and disordered behaviors.

“Furthermore, in males, sexual activity is associated with release of dopamine, the hormone associated with addiction, which explains much of the observed compulsive sexual behavior in MSM. LGBT persons also have higher rates of psychological disorders — even in countries where they are affirmed. It is therefore unfortunate that a majority of member states of the United Nations see fit to take the path of incoherence in seeking to enforce this pathology whilst at the same time facilitating the suppression of genuine, fundamental human rights.”