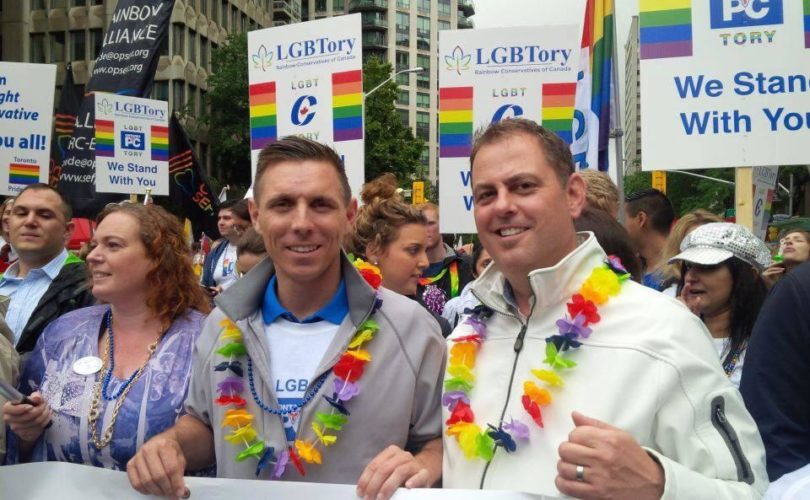 “LGBTory came together as grassroots effort in Toronto to establish a strong presence during Pride Toronto 2015,” Ellerton told LifeSiteNews in an email. “We worked very hard over the past three months” with the result that “over 50 Conservative and PC members” marched in the June 27 event.

The openly gay Ellerton, who runs the Toronto PR company Conaptus, was described by Maclean’s Magazine as “one of the Tories’ top staffers” when he resigned as aide to then-immigration minister Jason Kenney to work for PC leader Tim Hudak in 2010.

Ellerton ran as PC candidate for Parkdale-High Park in the June 2014 election, losing to NDP MPP Cheri DiNovo. He conceived of and co-founded the “Fabulous Blue Tent” parties for LGBT Conservatives, apparently hot-ticket events at the 2011 and 2013 Conservative conventions. These “helped build up to where the movement is today,” Ellerton told LifeSiteNews.

But critics say this first-ever Conservative contingent in Toronto’s Pride parade, coinciding with Brown’s emergence as PC leader, is an affront to the party’s social conservatives.

“We continue to receive daily letters, emails and calls from our supporters who are incensed at the betrayal of Patrick’s ‘politically correct’ escapades in the homosexual community,” CLC vice-president Jeff Gunnarson told LifeSiteNews.

“While we will continue to support him due to his infallible federal vote record, we are closely monitoring his statements and actions – and indicating his poor judgments on our website.”

And while CLC continues to hear criticism of Brown – who has yet to earn a seat in the Ontario legislature – Ottawa-based talk-radio host Nick Vandergragt took aim against local MPPs MacLeod and MacLaren.

The outspoken Vandergragt, who hosts the weekend program Nick at Night on CFRA, excoriated MacLeod and MacLaren’s participation in the Pride parade as pure political pandering, and a betrayal of their base.

“They have a large social conservative voting block that did a lot to get both of them elected,” he told LifeSiteNews. Politicians should be willing to make “hard choices” for their constituents, and “traditionally Conservatives have not marched in the gay Pride parade.”

Vandergragt says it doesn’t matter to him if people are gay or not. “What really irked me was this idea that we have to be inclusive with a group that already has representation in our ranks, as if the symbol of inclusiveness is more important than the substance of merit.”

The father of eight also objects to the “simulated sex stuff” and nudity that is on display during the Pride parade. “Would you want your kids down there watching this stuff?” he asked. Conservatives claim to be for “the rule of law” then “attend a parade that features nudity, and you don’t think the law should be applied?” He argues that since LGBT Canadians have all the rights they want, the parade is pointless.

But when Vandergragt criticized MacLeod and MacLaren on his radio program and on his personal Facebook page, “all hell broke loose,” he said. “When you poke a sacred cow, there’s going to be those who come out of the woodwork and call you all kinds of names.”

MacLeod in particular vigorously defended herself, telling the Ottawa Sun that “what I’m not comfortable with is looking at one segment of society and excluding them,” and the Toronto Star that “I am not going to kowtow to people who don’t share my values.”

A Sun poll asking whether MacLaren and MacLeod were right to march in the Pride parade showed respondents almost evenly divided, with a slight majority saying no, and vindicating Vandergragt.

“The people in downtown Toronto who put on the gay pride parade, they didn’t like you today and they won’t like you tomorrow,” is his message to Conservatives, “and they’re certainly not going to vote for the Tory party just because you went down to the gay Pride parade.”

But LGBTory’s Ellerton contends, “There has been increased effort in recent years to better engage the LGBT community with conservatives in Canada.”  He sees a “well of untapped support of LGBT Canadians” who “want smaller government, are proud of the Harper government’s principled foreign policy, and know that we need to continue to work hard to grow our economy.”

As to what place social conservatives have in the LGBTory vision of the PC Party, Ellerton told LifeSiteNews that, “Social conservatives would be wise to move past the culture wars of the past and look for opportunities to work with LGBT community and reflect on where modern society is today.”

He was more forthcoming in a March 1, 2015 Toronto Star commentary in which he derided PC opposition to the Ontario Liberals’ sex-ed curriculum as “dumb” and noted that “social issues have proven to be losing issues for Canadian conservative parties.”

“In 2011, as a writer in Tim Hudak’s war room, I saw first-hand how pandering to a dwindling demographic dooms us to electoral failure,” Ellerton wrote then, also noting that, “Respecting people of faith is one thing, but taking policy cues from the pulpit or minbar is a recipe for electoral disaster.”

On June 1, PC MPP Monte McNaughton presented a petition in the legislature asking for repeal of the sex-ed curriculum that was signed by 185,000 parents – scarcely a dwindling demographic.

Brown has said that as premier, he will scrap the Kathleen Wynne Liberal government’s sex-ed agenda and begin again, consulting with parents.

Whether he will take policy cues from pulpit, minbar, LGBTory, CLC, or parents remains to be seen.