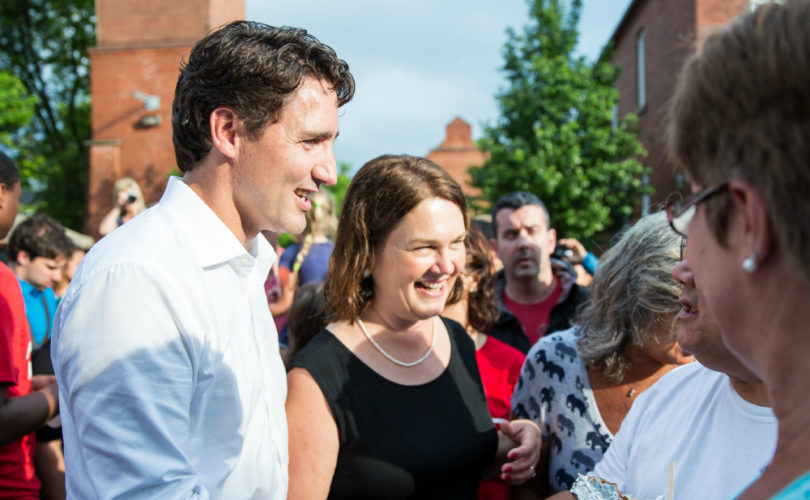 OTTAWA, November 18, 2015 (LifeSiteNews) — Canada’s new health minister promises to “equalize” access to abortion, especially for women living in rural areas, but won’t give specifics. However, the Abortion Rights Coalition of Canada has supplied LifeSiteNews a long shopping list for addressing the “problem.”

The ARCC wants more surgical time for abortions in rural hospitals, elimination of conscientious objection by pro-life doctors, screening out of pro-life ob-gyns at medical school, full funding for pharmaceutical abortion through so-called “emergency contraceptives,” and withholding of  federal funding to New Brunswick and Prince Edward Island if these provinces don’t remove remaining restrictions on abortions.

Canada’s new health minister, Jane Philpott, made her comments in a written response to a query from the CBC, stating, “We know that abortion services remain patchy in parts of the country, and that rural women in particular face barriers to access. Our government will examine ways to better equalize access for all Canadian women.”

Responded the WeNeedALaw organization: “We could translate Minister Philpott’s statement like this: ‘It is completely unacceptable that pre-born children are killed with greater ease in Canada’s urban centres than in rural communities.’”

“Seriously? Of all the problems an aging demographic poses for our top-notch health care system the first thing the Liberals want to do is make it easier for pre-born babies to be dismembered, decapitated and disembowelled?” they asked.

The CBC identified the what they deemed the most obvious culprit in limiting access: successive Prince Edward Island governments who have tried to balance pro-life and pro-abortion interests by funding abortions while sending the women out-of-province to have them.

But P.E.I. pro-lifer Randy Anchikoski also told LifeSiteNews the abortion issue is a distraction from the province’s real problems. “We have a big debt and aging population with all sorts of medical problems they face such as heart ailments and cancer. We have fewer women of childbearing age every year. From which part of our health budget is the money for an abortion clinic supposed to come?”

New Brunswick also restricts abortions, still insisting that they be done in hospitals, but it dropped a second regulation that they be approved by two doctors as medically necessary late last year.

Joyce Arthur, the executive director of the Abortion Rights Coalition of Canada, has put the two recalcitrant provinces at the top of her list of measures to “equalize” abortion access across Canada, calling on the federal government to, “arbitrate to resolve access/funding issues, and if the provinces still don’t comply, withhold federal transfer payments.”

As far as the problems allegedly facing rural women wanting abortions, pro-life leaders say this a familiar theme the pro-abortion forces use to push for measures such as pharmaceutical abortions and so-called “web cam” abortions.

Joanne Brownrigg of Campaign Life Coalition told LifeSiteNews that when she hears pro-abortion advocates talking about women in rural areas, “I think they are talking about chemical (or pharmaceutical) abortions.” These require two drugs, one to kill the unborn baby and the second to expel it from the womb, which only apparently remove the need for medical personnel in attendance, since they risk serious medical consequences. “The side effects can be serious,” said Brownrigg, “and abortion of any kind is not really a compassionate way to respond to a woman in a crisis pregnancy.”

In the U.S., according to Randy O’Bannon of the National Right to Life Educational Trust Fund in Washington, D.C., the rural access argument has been used to lower medical standards for abortions such as “allowing nurses, physicians’ assistants, nurse practitioners to perform abortions,” as well as “a strong push out there to sell these abortion pills on-line and deliver them by the post, with women taking them on their own at home.”

In Iowa, the alleged plight of rural women was used to justify “web-cam” abortions, which saw women “examined” via web camera by doctors who then prescribed abortion pills to be dispensed to the women at their remote site, far from medical aid should the unborn baby survive, or the dead baby fail to emerge.

Pro-abortion advocates in both countries skirt around the unpleasant truth that a big part of the access problem in rural areas is that most doctors, including most obstetrician-gynecologists, don’t want to do abortions.

In fact, a 2011 study indicated only 14 percent of U.S. ob/gyns do them, and an even lower proportion in smaller communities.

Canadian studies reveal that even when there are doctors willing to perform abortions in small town Canada they may face a shortage of willing anaesthesiologists or nurses to support them, and a shortage of surgical time. As well, they feel ostracised in communities that largely condemn abortion.

This leads to U.S. abortion advocates calling for all medical students to be taught to do abortions as part of their general training. As well, the Abortion Rights Coalition of Canada wants medical schools to “screen out anti-choice medical students before they enter the Family Planning program or Obstetrics/Gynecology specialty” because their “inability to fulfill job requirements should make them ineligible.”

This would seem to eliminate 86 percent of applicants, if U.S. statistics are true in Canada.

But then, Arthur’s wish list also includes a bonus system to attract abortion-doing doctors to rural areas, and the elimination of conscientious objection by pro-life doctors and nurses, requiring doctors at least to refer patients requiring abortions.

Americans have addressed the shortage of willing doctors, according to O’Bannon, with “circuit riding” abortionists “that fly in to do abortions for a day or two.”

Comments John Hof, president of United for Life British Columbia: “Real doctors don't want anything to do with committing abortions so she will resort to these drastic measures of screening out great physicians before they even enter medical school. It all sounds pretty sinister for anyone wanting to heal and save in her world.”

Hof argued that rural Canada was suffering from a general shortage of physicians. “Judging by some of the draconian measures on her list she would even mandate that all medical students pass an abortion questionnaire before being allowed into medical school,” he told LifeSiteNews. “Now that sounds like a great way to have fewer and fewer doctors willing to practice in rural areas.”

Hof added that any discussion of expanding abortion services would at least bring to light how bad the abortion situation is. “Perhaps now we can actually have some real media coverage of how bad the situation is in Canada for pre-born children. More than 100,000 a year are being sacrificed on the high altar of choice.”