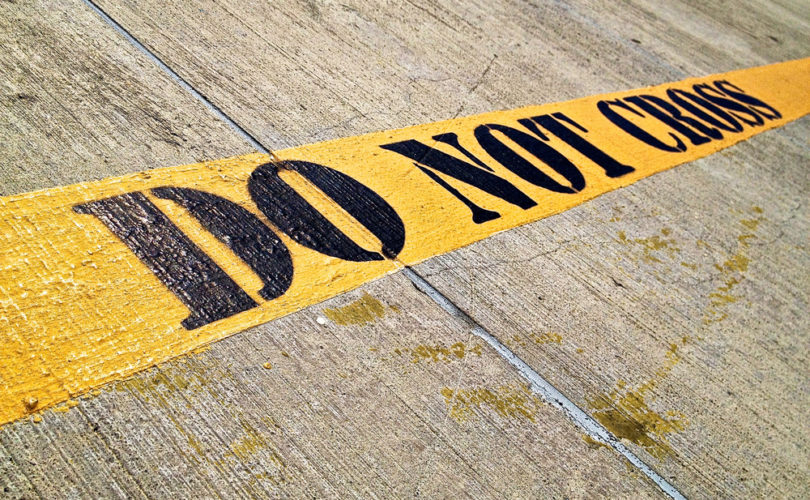 Patrick, a Democrat, said he was “still stunned” by the Supreme Court's unanimous ruling in McCullen v. Coakley, striking down the state's previous 35-foot “bubble zone” at today's signing ceremony. The original law, drafted by current Planned Parenthood League of Massachusetts President Marty Walz when she was a state legislator, required all “protesters” to stand dozens of feet away from the entrance of any such facilities. The justices did not rule that all such zoning laws are unconstitutional, merely that the Massachusetts zone was unduly large.

In light of the High Court's sanction, cities around the nation have repealed their own “bubble zone” laws or begun reappraising them. Massachusetts instead adopted a new law with lightning quick speed.

Earlier this month Gov. Patrick – flanked by Attorney General Martha Coakley, who is running for his office, and representatives of NARAL and Planned Parenthood – said he wished to “assure the citizens of the commonwealth that we will react, and we will react constructively and quickly.”

The new law passed just over two weeks after its introduction by hefty majorities, despite testimony from Massachusetts Citizens for Life (MCFL) Executive Director Pat Stewart that cited 20 laws already on the books that cover blockading, harassment, and other forms of prohibited behavior that could rein in truly disruptive protesters.

The governor today thanked lawmakers for their “fabulous and fast and sound” legislative response.

The new law, called the “Act to Promote Public Safety and Protect Access to Reproductive Health Care Facilities,” will give the police sole authority to decide whether a counselor's actions are inhibiting a woman's access to an abortion facility. Those deemed disruptive may be sent to stand 25 feet away from the abortion facility's entrance for up to eight hours at a time, or until the close of business.

“This bill is worse than the one just overturned,” according to a statement from MFCL.

“The reality is that individuals in the abortion industry have a business incentive to falsely characterize any attempt at pro-life communication on the public ways outside abortion clinics as a form of harassment or intimidation, no matter how peaceful,” he said.

“The selective targeting of one group, the immediate, unhesitating and unconditional acceptance of the assertions of one side, the draconian civil and criminal penalties, and the indecent haste with which this flawed measure was stampeded to the governor's desk, all smack of retaliation towards pro-life activists for McCullen v. Coakley,” he said. “Overlooked in this controversy over alleged violence in front of abortion clinics is the very real and lethal violence which these facilities were built to perpetrate on a daily basis and on an industrial scale. An estimated 9,000 unborn children are killed each year in the Planned Parenthood clinic on Commonwealth Avenue in Boston alone.”

State pro-life groups are already threatening to sue. But Democratic State Sen. Harriette Chandler said, “It will stand up to constitutional muster.”