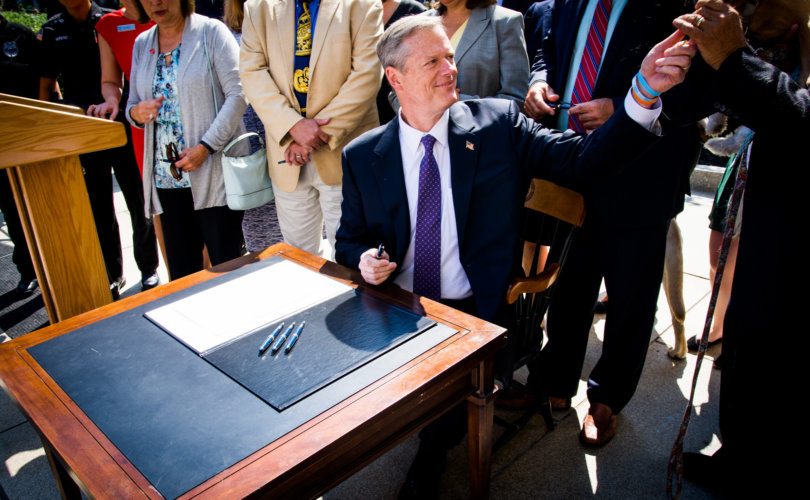 BOSTON, Massachusetts, September 13, 2016 (LifeSiteNews) — Churches could be affected in the state of Massachusetts by a new law that forces transgender acceptance on all citizens.

The state law, passed by the Massachusetts legislature in June, adds “gender identity” to anti-discrimination laws, equating self-chosen sexual preference with immutable characteristics such as race and biology.

In July, Governor Charlie Baker, a Republican, betrayed a campaign promise and signed the bill into law. The new transgender-affirming law is to take effect on October 1.

The Massachusetts Commission Against Defamation (MCAD), which will enforce the new law, issued a “Gender Identity Guidance” directive on September 1 to explain the law in practical terms.

The directive raises grave concerns among Christians that the government is forcing churches to facilitate homosexual and transgender ideology against their religious freedoms.

The MCAD directive lists compliance requirements for employers, landlords, credit and mortgage services, but it is the section on “Public Accommodation” that has stirred the greatest controversy.

The commission's directive defines “public accommodation” as “anyplace, whether licensed or unlicensed, which is open to and accepts or solicits the patronage of the general public,” and includes “private and public places.”

“Even a church could be seen as a place of public accommodation if it holds a secular event, such as a spaghetti supper, that is open to the general public,” the MCAD directive states.

“I can't think of a single church I know that doesn't hold itself 'open to the general public' virtually all the time,” Massachusetts Family Institute President Andrew Beckwith told LifeSiteNews. “People of faith seek to invite their community into the church to hear the Gospel and be ministered to.”

“It appears that the authors of this guidance are determined to force a radical ideology of sexual expression onto our communities of faith against our will and our sincerely held religious beliefs,” Beckwith concluded.  “Ironically, it was this tyranny of state intrusion into church matters which sent the pilgrims here in the first place.”

The MCAD directive not only compels employers to allow transgender men to use the women's restroom and intimate facilities (and vice versa), but requires under penalty of law that employers use the gender pronoun the employee chooses (must call a man a woman and vice versa), and change company records to use the employee's chosen opposite sex name.

Among the myriad examples the directive gives to illustrate how transgenders must be accommodated are locker rooms, showers, and changing rooms.

“A health club with locker rooms designated as male and female must grant all persons full enjoyment of the locker room consistent with their gender identity,” and “A public swimming pool with changing rooms designated male and female must allow the public to use the changing room consistent with their gender identity.”

Besides churches hosting public events or dinners, compliance with the new transgender affirming law is explicitly imposed upon bakeries to create wedding cakes for homosexuals and transgenders, stationery stores to print wedding invitations for gay and/or transgender weddings, restaurants to host and hotels to book gay celebrations, all regardless of the religious conviction of the business owners.

State legislators rejected a clarification barring sex offenders from entering the opposite sex's showers and private facilities, and only approved a vague reference to the possibility of prosecuting anyone who seeks to use the new law for “an improper purpose.”

“Anatomy matters,” Beckwith earlier told LifeSiteNews. “Requiring girls to share a locker room with anatomical boys is a bad idea, regardless of how those boys sexually identify or express themselves.”

Adding to the confusion, the MCAD directive disallows an employer to protect employees from men saying they are women just to assault or view women in intimate facilities. The directive calls it “evidence of discriminatory bias” if an employee seeks to verify the gender of a transgender employee by asking for identification or documentation of sex change hormones or surgery.

Toward the end of the MCAD directive, the commission admits there can be abuses because the law is unclarified. “The courts have yet to give significant guidance on how to interpret the requirement that gender identity be 'sincerely held and part of a person’s core identity.'”

Massachusetts is the 19th state to enact non-discrimination laws that include self-chosen “gender identity.”

The text of the new law is here.