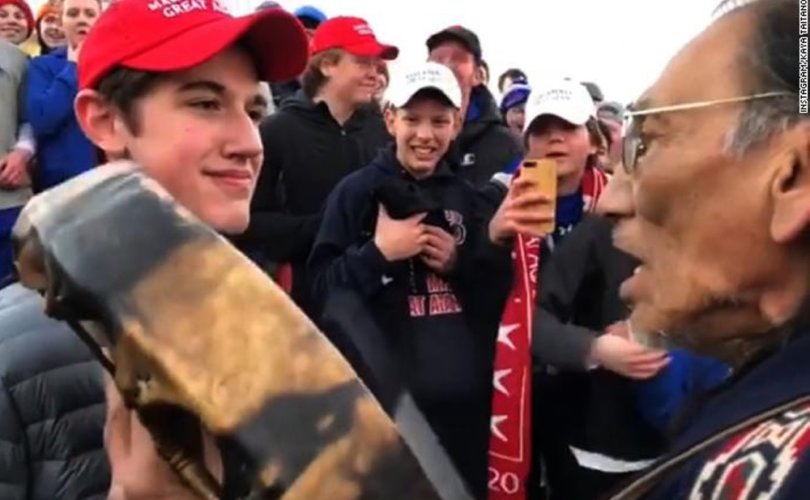 July 7, 2021 (LifeSiteNews) – A new documentary will be released this month about the 2019 Covington Boys/March for Life controversy, though whether the filmmakers are interested in truth or fiction remains to be seen.

Premiering July 16 at select theaters and virtual screenings in a handful of states, The Boys in Red Hats concerns the January 2019 confrontation between a group of teens from Kentucky’s Covington Catholic High School and Native American activist Nathan Phillips at that year’s March for Life in Washington, D.C.

Near the end of the pro-life demonstration, the press erupted with claims that a viral video showed the students harassing Phillips outside the Lincoln Memorial. But additional extended video and firsthand accounts soon revealed that Phillips was the one who waded into the group, which had been waiting for its bus, and decided to sing and beat a drum inches from the face of stationary student Nick Sandmann, whereas the boys had merely clapped and cheered in time with Phillips’ performance, and performed school cheers in hopes of drowning out racist taunts from nearby members of the Black Hebrew Israelites fringe group.

As additional video came to light last year, many journalists and public figures quickly deleted their snap condemnations of the students, and some either tried to keep the original narrative alive or refused to unequivocally retract or apologize for their initial claims. The latter led to various lawsuits on behalf of the boys, with suits against The Washington Post and CNN having since been settled.

The film’s website says that director, producer, and co-writer Jonathan Schroder, himself a Covington graduate, watched the incident with interest due to his knowledge of the “deeply formative nature of an adolescence spent inside the entitled Covington Catholic bubble,” and wanted to explore “how one fleeting interaction can become a global controversy.”

The film’s promotional materials hint at sentiments on both sides of the dispute without declaring which one the film ultimately comes down on. The website emphasizes Covington Catholic’s status as “affluent” and (allegedly) “entitled,” and says the incident put the school at the heart of “uncomfortable conversations about racism, privilege and politics.”

The trailer, meanwhile, boasts that the film will “piss off both sides.” It plays multiple clips of public figures and interview subjects calling out the misrepresentations of the official narrative, as well as other interview subjects claiming things like, “we send those kids” the “message” that “you’re better”; “there’s reasons why people who maybe aren’t white, rich, Catholic school kids see something different”; and that “these kids” are “taught every day that acting like an Indian inappropriately is perfectly acceptable” (the video shows no obvious instances of any students “acting like an Indian”).

At one point, Schroder is shown saying that, as a former Covington student, “I used to participate in that behavior, that’s what those kids do, that’s what they’re taught to do,” without explaining what “behavior” he’s talking about.

One favorable review of the documentary promoted on the website, by Film Threat’s Alan Ng, makes its intentions clearer. While revealing that “Schroder even investigates Phillips’ false claims that he was a Vietnam veteran and uncovered Phillips’ questionable non-profit organization that he claims to run,” Ng goes on to confirm that the director “does not let Covington Catholic High off the hook.”

“Having attended the school, [Schroder] understands the toxic culture cultivated there, leading to the students’ odd encounter with Phillips,” Ng writes. “He explains why the boys just didn’t walk away during the confrontation. He brings several experts in to speculate about what was going on in the students’ minds that lead to this confident stance oozing of privilege, supremacy, and racism (they were wearing MAGA hats, after all). It becomes both a racial and class confrontation.”

To further bolster the insinuation of some sort of racial component to the students’ actions, Schroder invokes “an abusive incident with his teacher that led him to question various controversial traditions at the school that still has us talking, such as Black day (an incredibly uncomfortable revelation).” Whatever the truth behind these claims about Covington Catholic’s history, Schroder started college in 1992, meaning his time at the high school predated that of Sandmann and his classmates by more than 20 years.

So far, neither Sandmann nor attorneys for any of the Covington students have commented on the film. A previous documentary on the event, Steve Oldfield and Ryan Anderson’s Rush to Judgment, focuses more on the media’s distortion of what really happened.