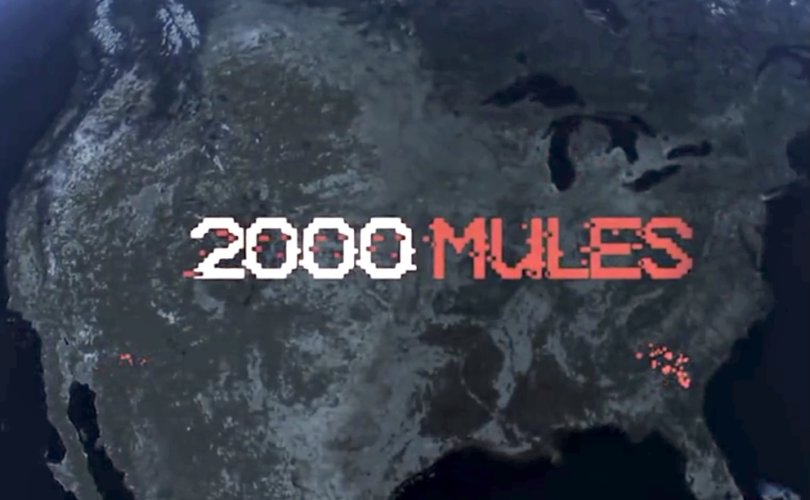 (LifeSiteNews) — Political commentator and conservative filmmaker Dinesh D’Souza sets out to prove there was widespread voter fraud in the 2020 U.S. presidential election in a new movie slated to come out this spring.

In the ambitious new film “2,000 Mules,” made in collaboration with True the Vote’s Catherine Engelbrecht, D’Souza highlights footage and data that he argues prove there was a concerted effort to stuff ballot boxes in key swing states during the 2020 election.

Released to Rumble on Saturday, a teaser-trailer for the film has already accrued nearly a million views.

D’Souza – whose previous movies include Trump Card and 2016: Obama’s America – contends in the trailer that the new evidence proves the 2020 election was not after all “the most secure in American history,” as has been asserted by the Department of Homeland Security and President Joe Biden

Instead, the filmmaker presents surveillance footage and cell phone geotracking data that, he suggests, proves that thousands of individuals collaborated to drop off multiple ballots per person at different drop boxes throughout major swing states in a bid to tilt the election in Biden’s favor.

“This one mule made 53 trips to 20 drop boxes,” D’Souza says in the trailer, adding, “He’s not alone. We tracked 2,000 ‘mules’ making multiple ballot drops, leaving no fingerprints, snapping photos to get paid.”

According to D’Souza, the footage depicts “a coordinated ring of illegal vote harvesting in all the key states where the election was decided.”

Former President Donald Trump praised D’Souza’s film, arguing that the content it depicts proves that “the 2020 Presidential Election was Rigged and Stolen.”

“Highly respected Dinesh D’Souza, working together with Catherine Engelbrecht of True the Vote, just released a trailer to their new movie, ‘2,000 Mules,’ that shows the world exactly how the 2020 Presidential Election was Rigged and Stolen,” Trump said in a quote included on the movie’s website.

“The movie exposes the lies of the Democrats, RINOs, and Fake News who say it was the ‘most secure election in history,’” the former president continued, arguing that the election “was, perhaps, the least secure in history.”

“The ballot box was stuffed, and stuffed like never before — and it’s all on video. Ballots were trafficked and sold in a massive operation in each Swing State,” he said. “The evidence is so damning, what will the cowards who sat and did nothing about the stolen election say now?”

“The way our votes were taken away is a disgrace to our Nation,” Trump added. “It must be fixed.”

Lawmakers in many states have moved to tighten voting rules over the past year in an effort to reverse pandemic-era policies in which state governments drastically expanded eligibility for mail-in voting ahead of the 2020 election, allegedly to combat the spread of COVID-19.

The changes led to an unprecedented number of Americans sending in their ballots through the mail, a system known to be less secure and more prone to fraud than in-person voting.

Moves to cut back on widespread mail-in voting and apply other safeguards to reduce fraud have sparked backlash from left-wing politicians and media figures, who have argued that such measures amount to a “threat to democracy.”