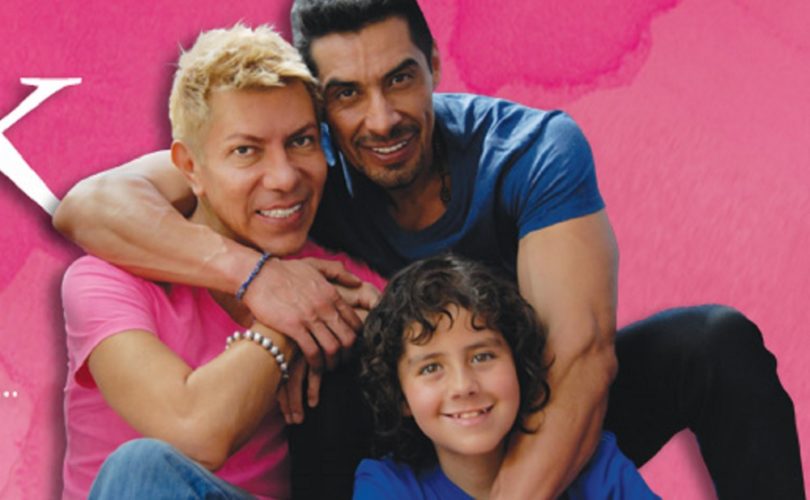 MEXICO, March 11, 2016 (LifeSiteNews) – A new motion picture now showing in Mexican theaters is exposing the public for the first time to a relentlessly realistic depiction of the dangers and harm suffered by children adopted by homosexual couples.

Pink: It's not what they say it is, which debuted on two hundred screens this weekend in the Cinemex chain of theaters, is the story of a homosexual couple who adopt a boy, inevitably exposing him to the chaos and confusion generated by their promiscuous lifestyle.

The movie's uncompromising portrayal of the gay subculture has provoked protests from homosexual activists in Mexico, who have asked government officials to prohibit the showing of the film in the nation's theaters.

The federal government's National Council for the Prevention of Discrimination initially refused to act but has now asked the secretary of governance to increase the movie's rating to a more restrictive one (it is currently accessible to those aged 15 and up). It also called on the movie industry to eliminate “stereotypes, prejudices, and stigmas” associated with homosexual “families.”

Homosexual “marriage” and adoption have been legal in the nation's capital, Mexico City, for several years, and the country's Supreme Court is gradually seeking to impose the redefinition of marriage on the entire country, despite mass protests and resistance from state legislators. A strong majority of Mexicans continue to oppose adoption by homosexuals.

Pink offers a frank examination of the social, psychological, and spiritual consequences of a child's exposure to homosexuality.

“Why do all of the children have a papa and a mama, and I have two papas?” the adopted boy, in tears, asks his homosexual “father” in a scene from the movie's trailer.

The adopted child begins to experience confusion about his own sexual identity as he is repeatedly exposed to the lascivious and dangerous influence of a wide variety of freakish characters typical of the homosexual subculture. He encourages a friend to embrace his own increasingly effeminate forms of behavior. He also suffers mockery and social rejection from his schoolmates.

The homosexual couple encounter various Christians who uncompromisingly oppose their relationship and seek to bring about their conversion.

“How horrifying it is that children are growing up with homosexuals. They're going to grow up with [homosexual] tendencies,” remarks one. Another tells one member of the pair that his sexual acts with his boyfriend are “unnatural” and asks him if he's really happy.

One member of the pair ultimately repents after reading the Bible and rejects the homosexual lifestyle, while the other does not and contracts AIDS.

The movie has been criticized for low cinematic standards and exaggerated portrayals of ultra-effeminate homosexuals. It was produced on a budget of about half a million dollars by Evangelical filmmaker Francisco del Toro, a former actor and Evangelical Protestant who has made movies on a variety of themes, including drug addiction, the harm caused by occult practices, and devotion to family.

Del Toro has brushed off accusations of “homophobia” made against him by homosexual activists.

“Children shouldn't be trophies for the gay movement. The interests of the child should prevail in adoption,” said the filmmaker in a recent interview.

Regarding his depiction of a child following his homosexual “parents” into their gay lifestyle, del Toro observed that “a child absorbs the behavior and customs of the home like a sponge, and if you don't believe that, explain to me why there are families that for generations have been kidnappers or bank robbers.”

He denied that the movie is “homophobic” and encouraged the public to see it for themselves rather than heed his detractors.

The portrayal of the gay lifestyle in Pink is reflected in numerous studies that have established high rates of promiscuity and instability in relationships among homosexuals, who also suffer a substantially elevated frequency of HIV infection as well as many other physiological and psychological disorders. Studies also indicate that children adopted by homosexuals suffer significantly higher rates of emotional and developmental problems and have a higher rate of treatment for mental health problems.

Pablo Cheng, a famous Mexican actor and homosexual who plays one of the two men who adopt, told the publication TV Notas that he opposes homosexual adoption.