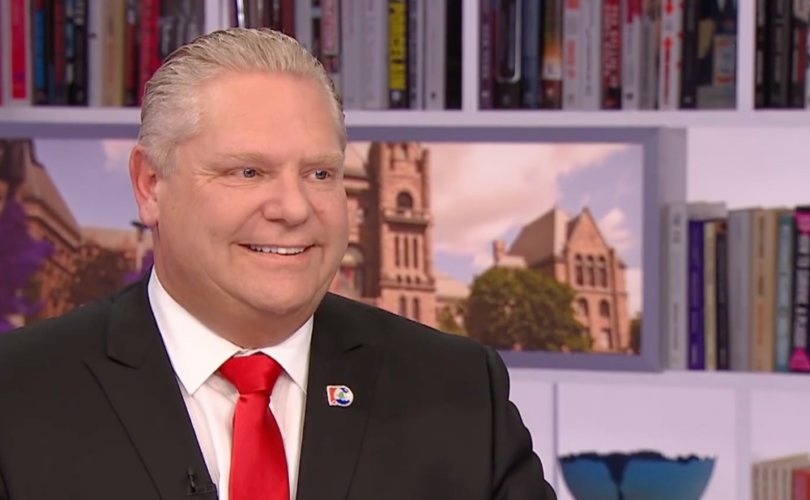 Ford spoke to reporters Monday following his cliffhanger victory over the weekend, which was confirmed when his closest rival, Christine Elliott, conceded defeat Sunday.

The Liberals implemented the sex-ed curriculum in all Ontario’s publicly funded schools in 2015, despite massive parental backlash.

From the outset of the turbulent, six-week campaign, Ford said he’d review the sex-ed program.

But he then significantly upped the ante during a candidate interview with Campaign Life Coalition by promising to repeal it, the CLC voter guide attests.

“Mission accomplished!” Granic Allen emailed to her supporters Tuesday.  “Even though I did not win the leadership, we now have a Leader – in Doug Ford – who is committed to the repeal of the Wynne sex-ed curriculum.”

Indeed, commentators across the political spectrum credit Granic Allen, who put her support behind Ford at the March 10 leadership convention, as the crucial “king maker” in the race.

“It has been almost universally acknowledged by the mainstream media that the social conservative vote is the key factor which crowned him king. That’s indisputable based on analysis of the numbers,” Fonseca noted in an analysis of the race.

Campaign Life Coalition urged its supporters to put Ford’s name second on the ranked ballot after Granic Allen, who as president of Parents As First Educators has been at the forefront of the battle against the sex-ed curriculum.

It also lauded Ford for asserting on the campaign trail that parents should be told when their minor daughters seek an abortion.

Under Ontario consent and privacy laws, it’s the doctor who assesses a child’s capacity to consent to an abortion, no matter how young. And because the discussion is protected by patient-doctor confidentiality, parents are completely excluded.

“Kids can’t even get their tonsils out without the approval of their parents,” Ford told the CBC while campaigning in London. “I think we’ve got to consult parents, and that’s what we have to do.”

However, some skeptics may point out this is deja vu all over again.

Campaign Life Coalition endorsed former PC Party leader Patrick Brown in his 2015 leadership bid, based on his impeccable pro-life voting record as a federal MP and his promise to “scrap” the sex-ed.

Once elected leader, Brown infamously flip-flopped on sex-ed, did a complete about-face on abortion, marched in homosexual Pride Parades and told social conservatives their convictions weren’t welcome in his party.

But Fonseca says the obvious answer to this is that Ford is not Brown.

“From what I’ve seen of Doug Ford, he seems to be sincere,” he told LifeSiteNews. “Of course, there’s no guarantees, and a politician can always betray you. But Ford has consistently repeated his promise he’ll repeal the sex ed, and I expect he’ll honour that promise.”

Moreover, there are “thousands” of social conservatives in the party, as well as some MPPs, to support and exhort Ford in making good on his promise, Fonseca said.

Ford will need that support and gentle pressure in the face of a liberal media, which is already “hammering” the new Tory leader on the issue, he added.

Fonseca isn’t put off by Ford saying the economy would be his top priority if he’s elected premier.

“He told Campaign Life that the sex-ed curriculum would be an ‘early priority’ in his administration,” Fonseca said.

“We understand his top priority is bringing relief to the downtrodden taxpayer, so we don’t expect Ford to leapfrog the repeal of Wynne’s sex program over that. Making the repeal an ‘early priority” is good enough.”

A former Toronto councillor and brother of the late Toronto Mayor Rob Ford, Ford predicted the PC Party will sweep the Wynne Liberals out of power in the June 7 election.

Fonseca urged social conservatives to mobilize to defeat Wynne and the Liberals.

“Ford is not fully pro-life and not onside with all our issues, but with him at the helm, the PC Party is nonetheless a genuine, viable alternative to the left-wing, anti-life, Wynne Liberals,” he said.

“All Ontario pro-life and pro-family advocates need to get involved in this critical election campaign. We only have twelve weeks. Let’s make them count.”

Ontario Conservative leadership hopeful: Parents should be told when 11-year-olds get abortion