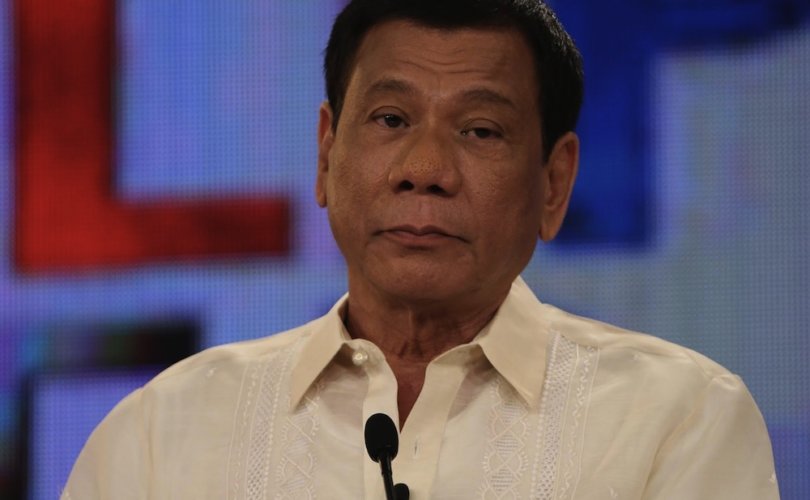 MANILA, Philippines, June 29, 2016 (LifeSiteNews) – New Philippines president Rodrigo Duterte has promised to champion contraception to combat poverty in the country of 102 million people, and he doesn’t mind taking on the Catholic Church to do it.

But experts on corruption and population say babies aren’t the country’s problem. It’s the culture of public malfeasance in which farmers are driven off their land to make way for multinational companies who bribe government leaders for access, and public funds being diverted each year into private pockets.

Duterte takes office June 30 promising to reduce poverty by 25 percent in six years. About the same proportion of the population is considered poor. Finance Secretary Carlos Dominguez promised mega-projects in rural areas to achieve the goal, noting that the nation’s economic growth of 6 percent a year is too focused on urban areas.

In a speech on Monday in Davao City, where Duterte served as mayor or vice mayor for 22 years and paid cash to people for sterilizations, he promised to revive a population control program instituted by his predecessor, Benigno Aquino III, that was stalled by conservative and Catholic opposition. “I will reinstall the program of family planning. Three is enough,” said Duterte, the father of four.

The country’s fertility rate was 3.01 births per woman in 2013. According to some reports, it has dropped to 2.9 today. Duterte blames too many children as a cause for the country’s poverty and the Catholic Church for the fertility rate.

Duterte’s family planning program isn’t his only bone of contention with the Catholic Church. Its leaders have also condemned his public profanity (he has cursed them and Pope Francis as “sons of whores” – the Pope for causing a mammoth traffic jam during his January visit), his threats to kill criminals without trial, and his joking expression of regret when news broke of an Australian missionary being raped that he hadn’t had a chance at her first.

He called the Catholic Church “the most corrupt institution” and claimed that bishops and priests kept mistresses, pressured him to make valuable real estate available to them when he was mayor, and lived in luxury while the common people starved.

Duterte has also claimed he was molested by a Jesuit priest while in high school, naming a man accused of similar crimes in America.

The bishops have made it clear they considered him an unacceptable candidate, calling his behavior itself a form of corruption. And after his victory, they promised not to be silenced. Retired Archbishop Oscar Cruz declared, “We won't be quiet … the Church will preach what it thinks is right.”

Corruption is unquestionably a major problem for the Philippines. Aquino won election in 2010 on an anti-corruption platform and by all reports made sincere efforts to reduce it. Nonetheless, reported Transparency International, a corruption watchdog, most Filipinos it surveyed believed corruption had “increased” since 2010. In the same survey, most Filipinos rated the police, political parties or public officials/civil servants as  “corrupt or extremely corrupt.”

According to a 2008 report by the Bertelsmann Foundation, up to 30 percent of budgeted money for major projects was lost due to corruption. A report by Global Financial Integrity estimated that the Philippines lost $142 billion in illicit financial flows between 2000 and 2009.

Brian Clowes of Human Life International commented, “Only a simple-minded, one-level thinker would ever believe that having too many babies causes poverty. It is war, corruption, and greedy rich people who do this in poor nations.” Clowes said income disparity between a few rich families and the poor is “100 times worse” in the Philippines than it is in the United States.

Various levels of government have added to the disparity, Clowes told LifeSiteNews, by awarding huge swaths of land to multinational mineral and agricultural firms. “Many hundreds of thousands of people have been thrown off their land because they did not have a proper title — the land that had been in their families for many generations. But they were cleared off so that huge multinational corporations could grow mangoes and pineapples and orchids.”

Clowes suggested Duterte’s attacks on the Church might be a tactic in preparation for self-enrichment at the public expense. “Duterte is merely looking for a diversion to distract attention away from what he is going to do.”