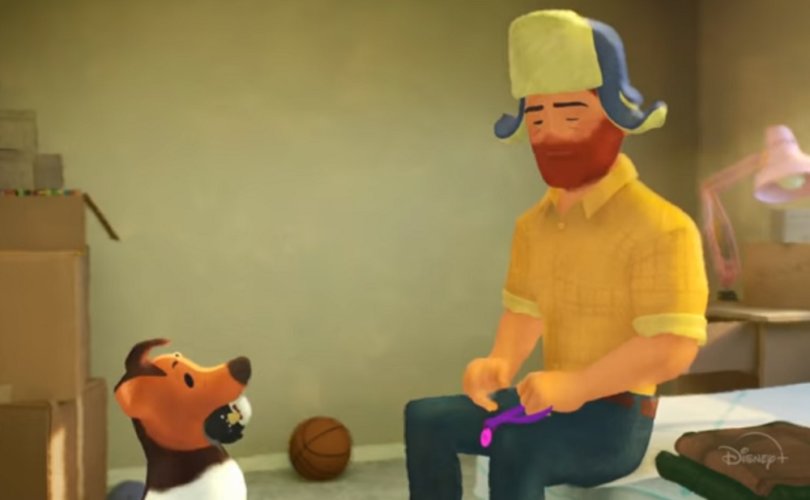 May 26, 2020 (LifeSiteNews) — Pixar featured its first homosexual main character in a new short film, “Out.” The film tells the story of a young man revealing to his parents that he is in a homosexual relationship.

The trailer shows the main character, Greg, looking at a picture of himself standing beside another man practicing telling his parents of his homosexuality. “Just look them in the eyes and say, ‘Mom, Dad, I’m…,’” he says, as the doorbell rings and his parents walk in.

According to Entertainment Weekly, “[w]ith a little nudge in the right direction from a pair of fairy god-pets — a magically fabulous dog and cat who ride in on a rainbow — Greg swaps bodies with his dog, Jim. As he frantically tries to hide the evidence of his relationship from his mom in this new canine body, he quickly learns that maybe there’s nothing to hide after all.”

“Before Greg swaps bodies with Jim, he asks himself, defeated, ‘What is wrong with me?’ After the swap, when his mother asks the same question of him, having seen him act like a dog, Greg replies, ‘Nothing.’”

Pixar, which is part of Disney, was previously known for family-friendly movies like Toy Story, Finding Nemo, and Cars. In recent years, both Disney and Pixar started pushing the homosexual agenda.

Pro-family advocates were dismayed at the fact that Onward, which was released earlier this year, featured a purple cyclops police officer, Officer Specter, voiced by lesbian actress Lena Waithe, who talks about her “girlfriend.”

The next superhero movie made by Marvel, which belongs to Disney, will feature a kiss between two men.

“I just shot a Marvel film with the first openly gay superhero, The Eternals. I’m married [sic] to the gay superhero Phastos, played by Atlanta’s Brian Tyree Henry, and we represent a gay family and have a child,” he explained.

In addition to playing a homosexual character, Sleiman identifies as a homosexual himself. Marvel specifically sought out an actor who is same-sex attracted.

According to an article published by MSN, “[i]nclusion of a same-sex romance storyline in The Eternals comes after Marvel has been criticized for touting LGBTQ representation in past films without delivering more than a brief, negligible scene.”

The directors of Avengers: Endgame, a Marvel movie grossing $2.8 billion worldwide, had indicated that one of the characters in the 2019 movie would be a homosexual. In the end, Joe Russo, one of the directors, had a brief cameo appearance as a same-sex attracted character.

“The character is an average guy who is part of a support group of people trying to move on from the grief of losing loved ones who vanished at the end of Avengers: Infinity War at the hands of Thanos. He talks about going on his first date since losing his male partner. It’s as simple as that, a blink-and-you’ll-miss-it moment,” Deadline wrote.

In March 2019, Marvel’s production chief, Victoria Alonso, said the world “is ready” for a homosexual superhero.

“I’m so passionate about this, I’ve got to tell you. Our entire success is based on people that are incredibly different. Why wouldn’t we? Why would we only want to be recognized by only one type of person? Our audience is global, is diverse, is inclusive. If we don’t do it that way for them, we will fail.”

Alonso went on to indicate an acceleration and strengthening of Marvel’s efforts to portray homosexual behavior as normal.

“If we don’t put pedal to the metal on the diversity and the inclusivity, we will not have continued success. Our determination is to have that for all of the people out there watching our movies,” she said.

During this year’s annual meeting of shareholders, Disney CEO Bob Chapek claimed that the company is losing money not because of its promotion of the LGBT agenda.

According to NBC News, Chapek said, “‘Disney believes in reflecting the diversity of its fanbase in its creative content.’ He added that producing inclusive projects will only become an increased priority for the company in the future.”

“We believe we want to tell stories that our audience wants to hear that reflects their lives,” he said, attributing the lower stock price to the coronavirus pandemic.