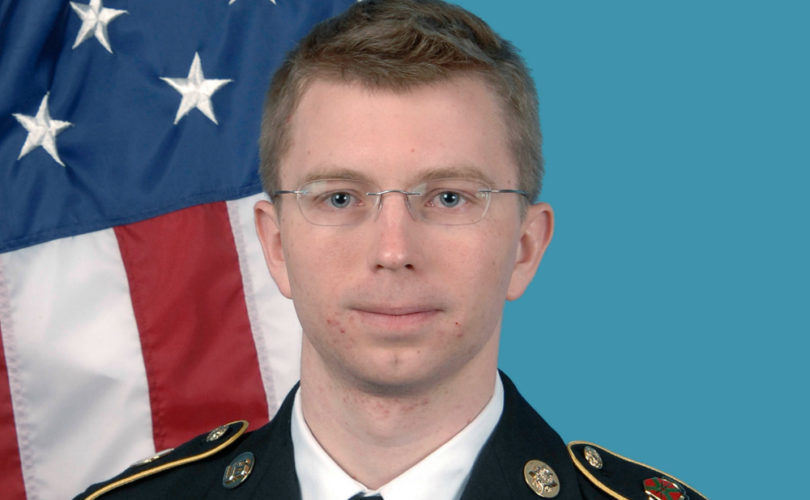 Bradley Manning before his incarceration and decision to start going by the name 'Chelsea'.

WASHINGTON, D.C., February 18, 2015 (LifeSiteNews.com) — A draft memorandum uncovered by USA Today suggests that the United States Army may soon make it more difficult to discharge soldiers who suffer from gender confusion, a move reminiscent of policy changes made during the lead-up to the repeal of the military’s “don’t ask, don’t tell” (DADT) policy toward homosexuality.

Currently, gender dysphoria – more commonly referred to as “transgenderism” – is considered a psychosexual disorder by the U.S. military and is grounds for separation from service.  While decisions to discharge transgender soldiers are currently made by officers in the field, according to the unsigned memo obtained by USA Today, such decisions will soon have to be approved by the assistant secretary of the Army for manpower and reserve affairs – a civilian appointed by the president.

The Army has so far refused to comment on the authenticity of the document obtained by USA Today, but such a move would closely mirror similar actions taken immediately prior to the 2011 repeal of DADT.  In 2010, the Pentagon twice increased the difficulty with which military commanders could expel troops who engaged in homosexual activity, first requiring a general or flag officer’s approval, and later requiring approval of the service branch secretary under the guidance of the Department of Defense general counsel and the Undersecretary of Defense for Personnel and Readiness, another civilian presidential political appointment.

The alleged memo also comes on the heels of a controversial reversal of Armed Forces policy toward Bradley “Chelsea” Manning, a former soldier currently serving a 35-year sentence at Fort Leavenworth military prison for leaking more than 700,000 classified documents.  Manning came out as transgender the day after his 2013 sentencing and has mounted a legal crusade to force the Army to transfer him to a women’s prison, call him by female pronouns, allow him to dress as a woman and pay for a sex change procedure.  The Army initially refused to indulge Manning’s demands, but on February 5, agreed to begin providing hormone treatments at taxpayer expense to begin his “transition” to living as a female.  Some observers have speculated that the decision could set a precedent for future accommodation of active duty transgender troops, should the military drop its ban on their service.

Elaine Donnelly, president of the Center for Military Readiness, questioned the validity of the proposed rule change, and told LifeSiteNews she believes the Obama administration is engaging in “a replay of the incremental strategy” it used five years ago to forcibly integrate openly practicing homosexuals into the military.

“By regulation, transgender persons are not eligible for military service, so this administrative order cannot be justified,” Donnelly said.  “The official that would be given authority to decide these cases is, in effect, a political appointee who will impose President Obama's LGBT agenda on military men and women who would be directly affected.”

Donnelly said accommodation of transsexuals – which often means permitting biological males to share restroom, shower, and sleeping facilities with females, and vice-versa – could prove not only disruptive, but dangerous in a military setting.

“[R]egulations regarding transgenders … should not be disregarded or circumvented as a political payoff to the President's LGBT constituency,” Donnelly told LifeSiteNews.  “Even with medical therapy, hormones, and even surgery, a person's biological makeup and DNA remain the same.  Accommodating biologically-male persons in the private quarters of military women would be inherently disruptive and demoralizing — consequences that affect military readiness.”

“In addition, it would be wrong to expect military health care providers to participate in highly-controversial medical treatments and therapies to alter ‘gender identity,” Donnelly said.  “Transgender persons can serve our country in other ways, but they are not eligible to serve in the military.”