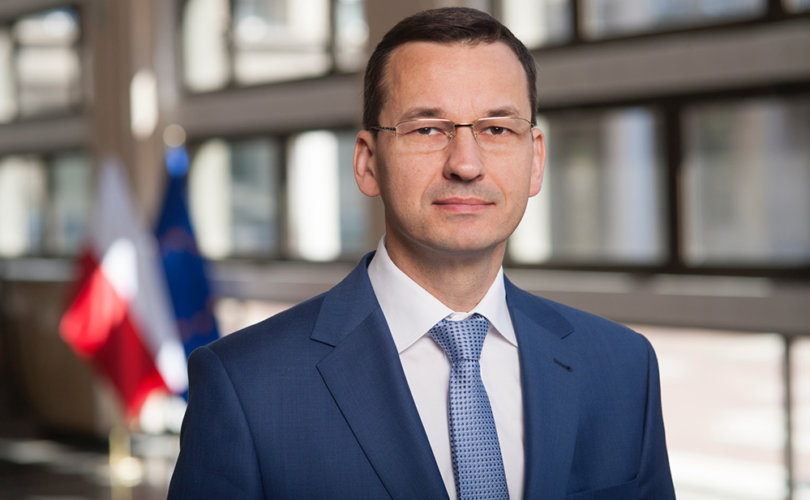 December 14, 2017 (LifeSiteNews) — Mateusz Morawiecki, the new Prime Minister of Poland, spoke about re-Christianizing Europe during the first interview after his nomination. His Law and Justice party has been under constant attack by the EU political elites.

Last Friday Morawiecki, 49, was appointed Prime Minister by President Andrzej Duda. He replaced Beata Szydło, who had served only half a term. Morawiecki had been Minister of Development, Minister of Finance and Deputy Prime Minister in Szydło’s government. He was sworn into office last Monday, and gave his first interview the previous Friday.

The topics of the conversation with a Catholic media outlet Telewizja Trwam ranged from the economic and social development of Poland, international relations, and the EU. Throughout the interview, Morawiecki made several religious references.

Speaking about Polish mining and the problematic EU climate policy, he said, “we want to transform Europe.” He digressed that his dream is to “re-Christianize Europe”.  Morawiecki specified that, “unfortunately, in many places, not only are Christmas Carols not sung, but churches are empty, and some are even turned into museums.”

Morawiecki welcomed the interviewer, Redemptorist Brother Piotr Dettlaff, with the greeting “Szczęść Boże.”  Impossible to directly translate into English, the phrase was a traditional way of greeting working farmers and essentially meant “God bless you in your work.” It is still used today when addressing priests and members of religious orders.

This unique Polish phrase was mentioned by Pope John Paul II in 1997 during his visit to the small Polish town of Krosno. “May the beautiful greetings ‘Szczęść Boże’ and ‘Niech będzie pochwalony Jezus Chrystus’ (Praised be Jesus Christ) never disappear from the mouths of Polish farmers,” he pleaded. “Greet one another with these words as a way of offering your best wishes to your neighbors. These words express your Christian dignity. Do not let it be taken away from you.”

During the interview, Morawiecki contrasted Polish culture and traditions with the EU’s values, which require “serious work.” He called Poland “a very proud, important and great nation, which will be even greater” thanks to pro-family and pro-demographic programs, introduced by the ruling Law and Justice party.

Referring to the EU threat to withhold funds because of Poland’s refusal to bow to immigrant quotas, Morawiecki asserted that the country “will not allow this sort of a blackmail.”

Morawiecki reflected, “May God give me enough strength to serve Poland well.” He spoke about the need for prayers and work for all Poles, not only those who voted for the Law and Justice Party.

Morawiecki is a former banker, manager, and lawyer who is fluent in English and German and understands Russian. He has four children. Morawiecki joined the Law and Justice Party in 2016.

Publisher and journalist Romuald Lazarowicz, who has known Morawiecki since childhood and still speaks to him “practically every day,” spoke to LifeSiteNews about the Prime Minister.

Lazarowicz said that Morawiecki had been involved in an anti-Communist opposition group led by his father, Kornel Morawiecki. All three men were members of the underground organization Fighting Solidarity (Solidarność Walcząca) in Wrocław.

“The atmosphere in his family home shaped his attitude, ideas and morality,” Lazarowicz said. On the one hand, Morawiecki’s mother Jadwiga was very religious, warm, and smart. On the other hand, the potentially deadly political activism of his father “stiffened his backbone.”

Lazarowicz revealed that Mateusz Morawiecki joined Fighting Solidarity as a teenager, and was “under very tight surveillance.” He was repeatedly “beaten by the Communist police, and brutally interrogated.” At one point, “he was even kidnapped and forced to dig his own grave.” Luckily, this was simply Communist intimidation.

In another instance, there was a danger of his imminent arrest during his senior year in high school—something that would prevent him from graduating. Friends from Fighting Solidarity who were doctors hid him in a local hospital for several days and transported him in a speeding ambulance so that he could take his final exam that was necessary to graduate and attend university.

Lazarowicz recalled that after Poland regained its independence in 1989, Morawiecki decided to seek as wide an education as possible. He studied in Poland, Switzerland, Germany, and in the United States, at the Central Connecticut State University and the famous Kellogg School of Management at Northwestern University.

Lazarowicz told LifeSite that as CEO of the third largest Polish bank, Morawiecki supported patriotic projects, such as films and exhibits commemorating Poland’s history. He also helped his former anti-Communist friends who were in difficult financial straits.

“He is an unusual politician,” Lazarowicz argued, since “he follows a moral compass and is truthful.” His goal is to “raise Poland from its Communist past, make it more prosperous and prominent.”

Morawiecki belongs to a “new generation of Polish politicians who can unite the respect for the past with appreciation for new tools and technologies.” He not only talks about the importance of the family and religion, but ”lives it in his personal life.”

Lazarowicz said that, far from being ashamed of Poland’s Christian past, Morawiecki is proud of it. He sees the return to Europe’s Christian roots as the only way to stop its decline.

When asked about Morawiecki’s religious life, Lazarowicz responded that the Prime Minister is a practicing Catholic who receives Communion.  Journalist Igor Janke, who wrote a book about Fighting Solidarity revealed that Morawiecki abstains from meat on Fridays, a custom still upheld by many Poles, but not many Catholics in other countries.

On the subject of abortion, Lazarowicz said that Morawiecki “views abortion as negatively as I do, possibly even in a more radical way.”

However, “politics is the art of swerving between the things which are just, and those which are possible and necessary,” Lazarowicz added. “It is not always feasible to transpose personal moral standards into political practice.”

Mariusz Dzierżawski of the Right to Life Foundation, who has repeatedly tried to ban abortions in Poland, most recently in 2016, told LifeSite, ”so far Morawiecki has supported the killing of the unborn disabled or sick.” He added, “let’s hope it will change.”

LifeSite asked the Prime Minister’s Office for some specifics on his dream to re-Christianize Europe but has not received a response by press time.

Poland to reclaim ‘day of rest’ by phasing out Sunday shopping