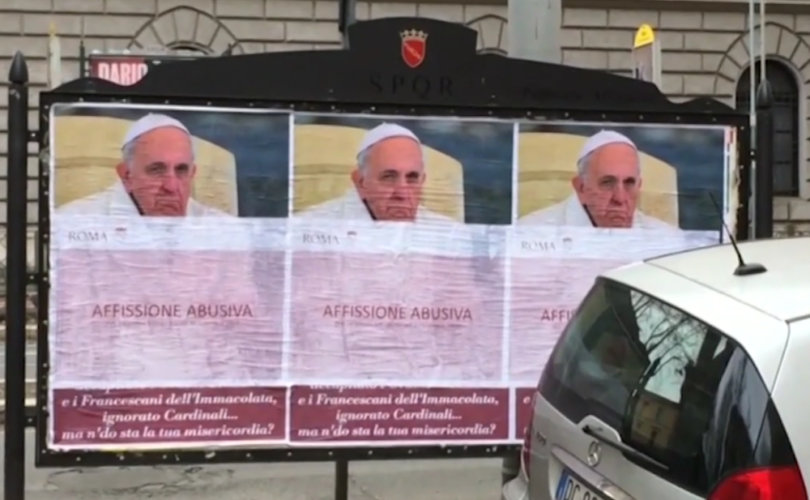 These controversial posters went up around Rome last month.

March 9, 2017 (LifeSiteNews) — In an interview with Pope Francis released today by the German newspaper Die Zeit, Pope Francis comments on the controversial posters that went up around Rome last month criticizing him for lacking in mercy. The posters, which one Vatican Cardinal called “the work of the devil,” Pope Francis called “great” and developed by “a clever person.”

The posters, found all over Rome, read: “Ah Francis, you have intervened in Congregations, removed priests, decapitated the Order of Malta and the Franciscans of the Immaculate, ignored Cardinals … but where is your mercy?” The posters featured a photo of a cranky looking Pope Francis on his throne wrapped in a thick coat.

Asked by Die Zeit if he felt attacked by the Curia, Pope Francis said he was at peace, adding: “I can understand how my way of dealing with things is not liked by some, that is totally in order. Everybody can have their opinion. That is legitimate and humanly enriching.”

“Either way, that was great!” he concluded.

The exchange is reminiscent of the harsh but sincere criticism of Pope Francis issued by Mario Palmaro, an Italian traditional Catholic writer who, along with Alessandro Gnocchi, was fired from Radio Maria Italy for being openly critical of the Pope’s controversial off-the-cuff interviews. The article, which led to their firing, criticized the pope for attempting to capture the praise of the world rather than remaining faithful to the truth. It was provocatively headlined “We do not like this Pope.”

When Palmaro found himself dying of cancer, he received a phone call from the Pope, who told him he appreciated the criticisms knowing that they were made with love and even that it was very important for him to receive them.

Michael Matt, editor of The Remnant newspaper, one of the most critical voices about the Francis papacy, told LifeSiteNews at the time that the Pope’s apparent openness to hearing criticism “speaks to the need for us to make our voices heard,” adding that it shows that “attempts by some Catholics trying to silence trads was really wrongheaded.”