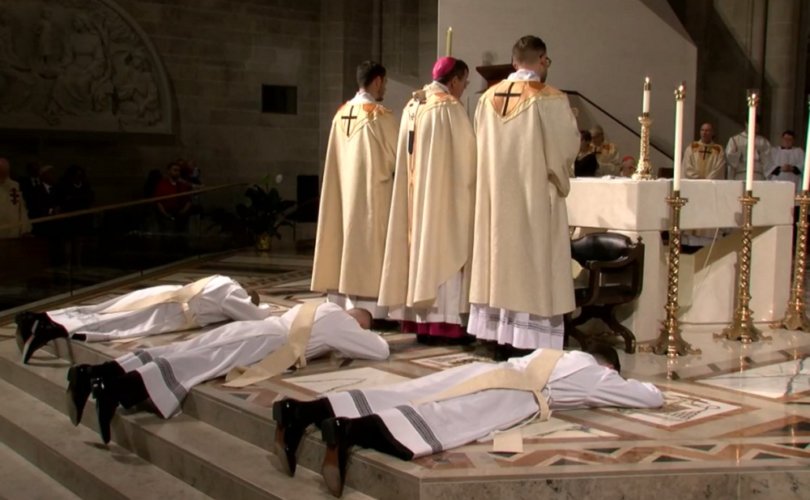 DETROIT, June 11, 2019 (LifeSiteNews) — Newly ordained to the priesthood, Fr. Derik Peterman said his generation of priests are encouraged despite the current climate in the Church but see the need for “radical fidelity” as a response.

Celebrating the Mass for the presbyteral ordination on Saturday was Archbishop Allen Vigneron of Detroit. He ordained Adam James Nowak, John Maria McKenzie, and Derik Edward Peterman to the priesthood at the Cathedral of the Most Blessed Sacrament. Archbishop Vigneron and other clergy laid hands on the three men, dressed them in priestly garments, and anointed them, calling on them to serve the Church.

Vigneron noted to the hundreds of people in the church that the ordinations came on the vigil of Pentecost, which, he said, is “a time when we totally dedicate ourselves to the responsibility to be missionary.” “In a few weeks, you will start your assignments on a mission to re-found your parishes,” Vigneron said. “Your mission will be to celebrate this new Pentecost, to continue the work of the new Pentecost. This is God’s work; He made you a missionary priest.”

Calling on all the clergy and laity to join the newly ordained in evangelization, Vigneron announced the next phase of the archdiocesan efforts to spread the Gospel in Michigan. “We in the archdiocese have a sense of the gifts of the Holy Spirit,” he said. “God heard us and answered us abundantly as we prayed for a new Pentecost. In the next few days, we’ll enter a new stage of the missionary journey. We thought about calling it ‘Unleash the Gospel 2.0,’” Vigneron as some members of the congregation chuckled in response. “See, you laughed, so that’s why we’re not calling it that. It’s called ‘Sent on Mission.’ We’re asking our parishes to be re-founded so that everything we do at the parish is about how we pray, serve and teach the Gospel message to be more effective witnesses to Christ.”

Acknowledging the scandals that have rocked the Church and the confidence of faithful Catholics in their leaders, Fr. Peterman made a pledge to his listeners. “In His Providence, the Almighty Father has called us new priests to serve Him during a very unique moment in Church history,” Fr. Peterman said with evident emotion. “There are a number of challenges we face — some of those are as old as sin, as they say, and the Church has been dealing with them since the time of the apostles. But there is also a new context to this issue of today, which requires a unique response.”

“It is no news to you all that the actions of many of our brother priests have devastated the integrity of the priesthood and scandalized people throughout the world,” Fr. Peterman said. “Every new story of scandal that comes out pierces my heart. But that has not left me hopeless, because Jesus our Lord had His heart pierced, too,” he said.

“It is no news to you all that the actions of many of our brother priests have devastated the integrity of the priesthood and scandalized people throughout the world,” Fr. Peterman continued. “Instead of discouraging us, the current climate of the Church has brought about a greater courage in my classmates and I. We see the need for radical fidelity to the Gospel; to be the salt of the earth and the light of the world. I can assure you, people of God, that we will do our best, with His grace, to restore the trust that has been lost and to fight against the sins which plague the Church.”

Following his remarks, members of the clergy and the congregation gave him a standing ovation.