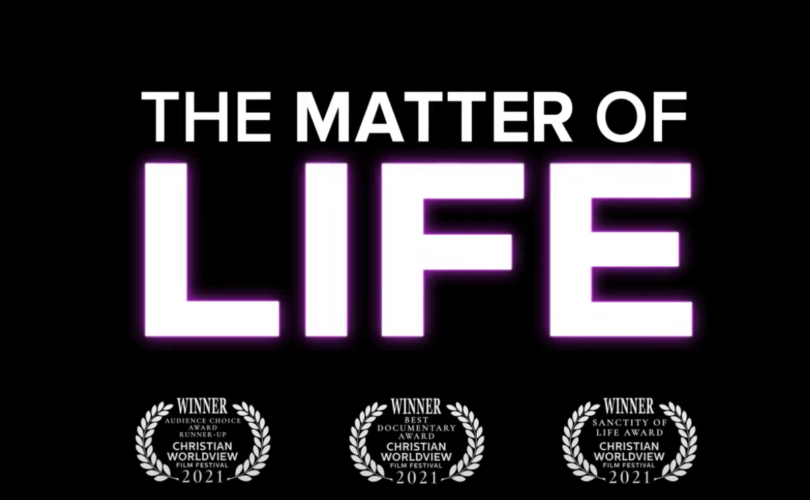 The Matter of Life/YouTube screenshot

(LifeSiteNews) – A new documentary by a formerly pro-abortion Christian will hit theaters in the U.S. this month with the aim of exposing the truth about abortion and the sanctity of life.

The Matter of Life is an award-winning pro-life documentary coming to theaters May 16-17. The aim of the documentary is to educate people on the history of abortion, what abortion truly is, and how it has impacted America.

“We stand at a critical point in history where the legality of abortion is being challenged in the highest courts,” the trailer description reads. “More than ever, it is important for everyone to know where they stand on abortion and why.”

The award-winning documentary “compels us to understand the pro-life case and form our own individual beliefs based on more than what is said in the media.”

The film employs experts to teach the history, philosophy, morality, and impact of abortion. It reviews the effects of abortion on the nation and individual people whose lives are changed.

The film features “powerful stories from women, former abortion clinic workers, historians, religious workers, pro-life atheists, and many more” and “stresses entering this conversation with understanding, love, and support. Doing so is critical to saving the lives of the unborn and to care for the women who carry them.”

This Christian film is written and directed by previously pro-abortion Tracy Robinson. She previously identified as “a pro-choice Christian.”

Robinson explained that her background is in film and video production and that she worked as an editor for documentaries. She had been working for a Pregnancy Resource Center on the side, making promotional videos.

“And one day, in 2016, my friends on staff at the Center invited me to a special presentation at a church,” she recalled. “The speaker was Alan Shlemon of Stand to Reason and the topic was The Case Against Abortion Choice.”

“He gave logically sound arguments and invited the audience to look at images of abortion aftermath,” she continued. “It struck me. I was convinced of the full humanity of the unborn child and finally understood the truth about abortion.”

“I was shocked that I had never heard this information until that point. And I knew there were many young adults out there like me who were still in the dark about the abortion issue.”

“And it was in that presentation that I felt a calling to make a documentary that eventually became The Matter of Life,” Robinson concluded.

The pro-life movement has recently been gaining momentum, with many states enacting laws to limit abortions and promising to ban them altogether if Roe v. Wade is overturned.

The recent leak of the Supreme Court’s draft decision that would overturn Roe v. Wade has also sparked new hope in the fight for the rights of the unborn.