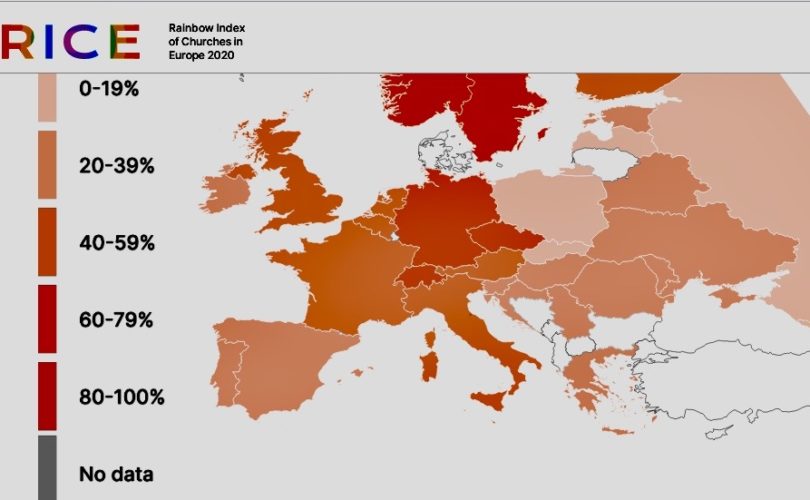 May 26, 2021 (LifeSiteNews) —The first “Rainbow Index of Churches in Europe in 2020” (RICE 2020) that ranks Christian church groups in Europe by their “LGBTI inclusivity” was released in April.

“As theologians researching inclusivity, we started with the argument that Jesus’ practice of radical hospitality and commensality sets the rule for churches on diversity, equality, and the affirmation of people of all sexual orientations and gender identities,” states the RICE research report, which was researched by the European Forum of LGBT Christian Groups (EF).

The report continues, “What are the implications of Jesus’ words and practices for inclusion in the sacraments and the ordination of clergy; the representation in leadership and decision-making in the church; the inclusivity of liturgical language; the acknowledgement of the church’s role in the discrimination toward LGBTI people?”

The Rainbow Index of Churches in Europe uses 47 indicators of LGBTI “inclusivity,” including the following:

These indicators were measured by a questionnaire used to assess the LGBTI “inclusivity” of a variety of Catholic, Orthodox, and Protestant churches, which were then ranked according to their index score. The church groups can score half a point to a full point per indicator.

An interactive map displays the average “inclusivity” index scores of each European country, and can be filtered by church group as well.

Leading the list of churches for their “inclusivity” scores are the Metropolitan Community Church in Finland (the majority of whose members are LGBT), the Church of Sweden, and the Protestant Church in Switzerland.

Notably, despite Catholic Church teaching acknowledging the grave immorality of homosexual acts, the Roman Catholic Church in Germany ranks fairly high on the church ranking list, with an index score of 25 out of 47.

The Catechism of the Catholic Church states, “Basing itself on Sacred Scripture, which presents homosexual acts as acts of grave depravity (Cf. Genesis 19:1-29; Romans 1:24-27; 1 Corinthians 6:10; 1 Timothy 1:10), tradition has always declared that “homosexual acts are intrinsically disordered.” (Congregation for the Doctrine of the Faith, Persona humana, 8). They are contrary to the natural law. They close the sexual act to the gift of life. They do not proceed from a genuine affective and sexual complementarity. Under no circumstances can they be approved.” (CCC 2357)

It is, therefore, impossible for homosexuals to enter into a marriage, since the Church teaches that “it is necessary that each and every marriage act remain ordered per se to the procreation of human life,” a doctrine “based on the inseparable connection, established by God, which man on his own initiative may not break, between the unitive significance and the procreative significance which are both inherent to the marriage act.” (CCC 2366)

It remains to be seen whether their index score will be “upgraded” after taking into account the recent widespread offering of public blessings to homosexual couples by Catholic priests in Germany, who are enabled by their bishops.

The so-called “Synodal Path” of the German Episcopal Conference, which promotes the heretical practices of female “ordination” and intercommunion, besides the blessing of homosexual couples, has been strongly rebuked by orthodox German clergy.

Communio veritatis, a priestly group in Germany, issued a statement on May 13 accusing the head of the German Bishops Conference of “carrying out the work of the wolves” and “tearing apart the Body of Christ by disregarding the Word of God and falsifying the teachings of His Church.”

Archbishop Carlo Maria Viganò considered the German “Synodal Path” to be so serious that it prompted him to make his first public appearance since he went into hiding to join other prominent Catholics in Munich in prayer and protest against the German Episcopal Conference and its president, Cardinal Reinhard Marx.

The German bishops’ defiance of Catholic Church teaching is one of the main reasons clergy like Cardinal Raymond Burke consider Germany to be in schism “that is real if not declared.”

The blessings of homosexual couples by German priests were carried out in open defiance of Church doctrine and the Vatican’s recent ban on same-sex blessings. The Congregation for the Doctrine of the Faith stated that it is “not licit to impart a blessing on relationships, or partnerships, even stable, that involve sexual activity outside of marriage (i.e., outside the indissoluble union of a man and a woman open in itself to the transmission of life), as is the case of the unions between persons of the same sex.”

The RICE 2020 project began in spring 2019, when “the EF invited researchers from the Protestant Theological University (PThU) in Amsterdam to research the inclusivity of churches in Europe and to construct an index for ranking European churches according to their inclusivity, analogous with the International Lesbian, Gay, Bisexual, Trans and Intersex Association’s (ILGA) Rainbow Europe equality index.”

The EF began RICE 2020 because, in their words, they “saw the need for ‘hard facts’ on European churches’ inclusivity to provide churches with an incentive” to become more inclusive, motivating their creation of RICE 2020.

EF explains that ILGA-Europe’s Rainbow benchmarking tool “serves as a model” for their project but “does not highlight the term ‘inclusivity.” ILGA Rainbow Europe (funded by the European Union), by contrast, focuses not on churches but on country policies concerning “non-discrimination,” the family, “hate crime and hate speech,” and “legal gender recognition.”

Among “ways forward,” the report suggests that churches “provide a blessing ritual for trans people,” “allow openly LGBTI persons admission to the seminary,” “get rid of the distinction in liturgical terms for blessing (same-sex) married couples,” and “support explicitly LGBTI couples when they adopt and raise children.”

In November, the European Commission announced that it wants to make “hate speech” and “hate crimes” EU crimes in 2021 and impose mutual recognition of “rainbow families” across the European Union by 2022.

EU Commission president Ursula von der Leyen announced during the State of the Union address at the European Parliament, “LGBTQI-free zones are humanity-free zones. And they have no place in our Union,” she said in reference to resolutions in Poland to protect the family and children from gender ideology.