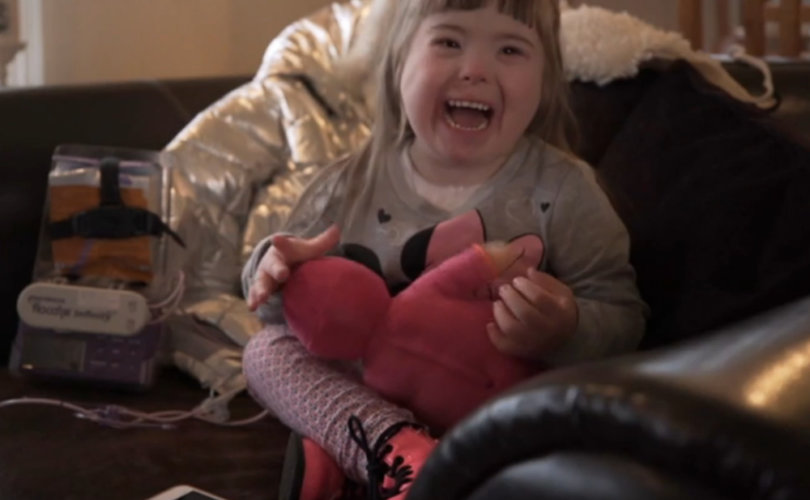 ICELAND, August 15, 2017 (LifeSiteNews) – A new report from CBS News details how 100 percent of babies in Iceland who are diagnosed with Down syndrome prenatally are aborted.

This has “almost completely eliminated Down syndrome births since the test began in the early 2000s,” Elaine Quijano of CBS explained. She interviewed an abortion counselor, an Icelandic scientist, and the mothers of children with Down syndrome.

She also interviewed an Icelandic woman who has Down syndrome.

People “just see Downs. They don’t see me,” she told Quijano. “It doesn’t feel good. I want people to see that I am just like everybody else.”

She said she tells women, “This is your life. You have the right to choose how your life will look like.”

“We don’t look at abortion as murder,” she continued. “We look at it as a thing that we ended. We ended a possible life that may have had huge complications.” It is “preventing suffering for the child and also the family.”

She said she sees life's moral decisions as “gray” rather than “black and white.”

The Icelandic mother of a young child with Down syndrome asked Quijano, “What kind of society do you want to live in?”

One expectant mom told Quijano she decided to forgo the test because “it wouldn’t make a difference, actually.” She said she works with autistic children and has a brother-in-law who has Down syndrome. “I think it’s just horrible, the statistics.”

The CBS report pointed out that the country's socialized healthcare system requires doctors to tell women about the option of prenatal testing for genetic defects.

There is “some truth” to the notion that informing women of this steers them toward abortion, a technician who does the prenatal tests said. “Obviously, if you didn’t mention it, then you wouldn’t be thinking about it.”

“My heart breaks for the innocent babies aborted in Iceland because society has deemed certain people undeserving of life,” Kristan Hawkins, president of Students for Life of America, told LifeSiteNews. “My children with genetic disabilities are loved and valued the same as my children without. I pray this report will wake up the people of Iceland to the discriminatory killing occurring amongst them. I pray they wake up before even more human beings fall victim to this disgusting mindset.”

Penny Nance, president and CEO of Concerned Women for America, the nation's largest women's public policy organization, said this is an example of eugenics.

“Iceland sounds like they are proud of the fact that they've killed nearly all unborn babies that had an in-utero diagnosis of Down syndrome. This is not a medical advancement,” said Nance. “This is eugenics and barbarianism at best. These individuals have no less worth than anyone else.”

“What is the next headline going to be?” asked Nance. “That a certain country has eradicated all females. Oh wait, China has already been down that road. There is no limit to this train of thought of devaluing human life.”

Actress Patricia Heaton blasted the notion that Iceland is eliminating Down syndrome, noting they're just “killing” everyone who has it.

Iceland isn't actually eliminating Down Syndrome. They're just killing everybody that has it. Big difference. #Downsyndrome #abortion https://t.co/gAONIzqRXW

Iceland on pace to virtually eliminate Down Syndrome people through execution.

There. Fixed the headline, you degenerate Nazis. pic.twitter.com/Z66ptVNtvC

So @Elaine_Quijano does a piece on people in #Iceland using eugenics and she treats it like it's a good thing. This is the face of evil.

To be clear @CBSNews in your hunt for modern day Nazi's you found them in Iceland. Eugenics was regularly practiced in Nazi Germany. #tcnt https://t.co/wDn4XKe1dy

The CBS report noted that Denmark trails Iceland with a 98 percent abortion rate for babies diagnosed with Down syndrome and that it is a trend throughout Europe. Abortion rates for Down syndrome babies in the U.S. are slightly lower but still well above 50 percent.