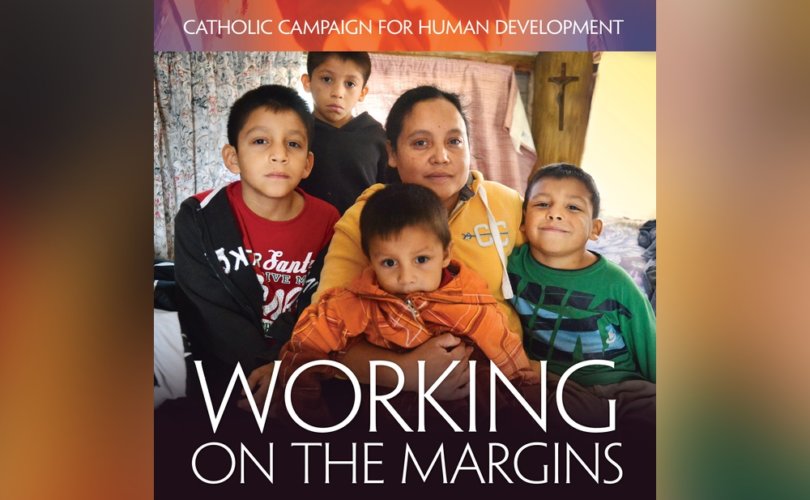 Poster from the USCCB's 2018 Catholic Campaign for Human Development.USCCB

WASHINGTON, D.C., November 9, 2018 (LifeSiteNews) — The Catholic Campaign for Human Development (CCHD) in its latest round of grants gave funds to a group that is allied with the largest Socialist organization in the United States and also affiliated with another group that has Marxist, pro-abortion and LGBT ties, a new Lepanto Institute report says.

The Indianapolis Worker’s Justice Center (IWJC) received $35,000 in CCHD funds, according to the 2016-2017 list of CCHD grantees. It is the first-ever grant for IWJC from the U.S. Bishops’ domestic anti-poverty department.

The Lepanto Institute referenced a 2015 report it had compiled on CCHD’s Marxist foundation in its report released Thursday.

“As with before, it is clear that the CCHD either did not actually vet the organization before giving it a grant,” Lepanto Institute president Michael Hichborn stated regarding CCHD’s awarding funds to IWJC, “or it willfully turned a blind eye to the distinctly Marxist and pro-abortion character it publicly holds.”

In the report, Hichborn issued the reminder that Socialism has been “thoroughly condemned by nearly every pope since Pope Pius IX.”

He quoted Pope John XXIII in stating that “no Catholic could subscribe even to moderate Socialism.”

“And yet, it is abundantly clear that IWJC is a Socialist organization, engaging in Socialist and pro-homosexual activities,” Hichborn said. “Its leadership is very clearly promoting abortion, homosexuality and Marxism as well.”

LifeSiteNews did not hear back from CCHD leadership regarding the IWJC grant.

The records indicate that IWJC itself has conducted pro-homosexual activities and the group has publicly supported Socialist and pro-abortion organizations.

The Lepanto Institute’s report follows two other Lepanto reports in recent weeks of CCHD dollars going to groups associated with support for abortion, open homosexuality and other things that conflict with Church teaching.

The CCHD national collection for this year will be held again in most U.S. dioceses on the Sunday before Thanksgiving.

The CCHD undertook large-scale renewal in 2010 with a vow to strengthen its Catholic identity and funding procedures after widespread criticism from numerous bishops and a coalition of Catholic and pro-life groups following reports that CCHD grants were funding groups associated with promoting abortion and same-sex “marriage.”

There was some improvement after the effort. However, problematic grants continued.

The CCHD grant guidelines, which generated from the 2010 Review and Renewal specifically state, “CCHD will not fund groups that are members of coalitions which have as their organizational purpose or coalition agenda, positions or actions that contradict fundamental Catholic moral and social teaching.”

Twenty-five percent of CCHD collections in U.S. dioceses stays with the diocese, and the other 75 percent goes to the national CCHD and gets redistributed to its grantees.

Hichborn wrote to each U.S. bishop the day after the Lepanto Institute’s latest report.

“Your Eminences and Excellencies,” he wrote, “if the CCHD was actually doing its job, these groups and many others like them would never have received a dime.”

“It is safe to say that the review and renewal is a complete failure as Catholic funds are continuing to go to the enemies of the Church,” Hichborn told the bishops.

Hichborn exhorted Catholics in closing to contact the CCHD regarding the latest problematic grant, and he linked to U.S. contact information for readers to express concern to their respective shepherd.

“No amount of reform is going to change the problem as the CCHD has shown itself to be either completely incapable of properly vetting organizations receiving Catholic funding, or it is itself supportive of groups like this,” said Hichborn. “And if CCHD sees no moral issue with funding an organization such as IWJC, then the fundamental problem with it is plain for all to see.”