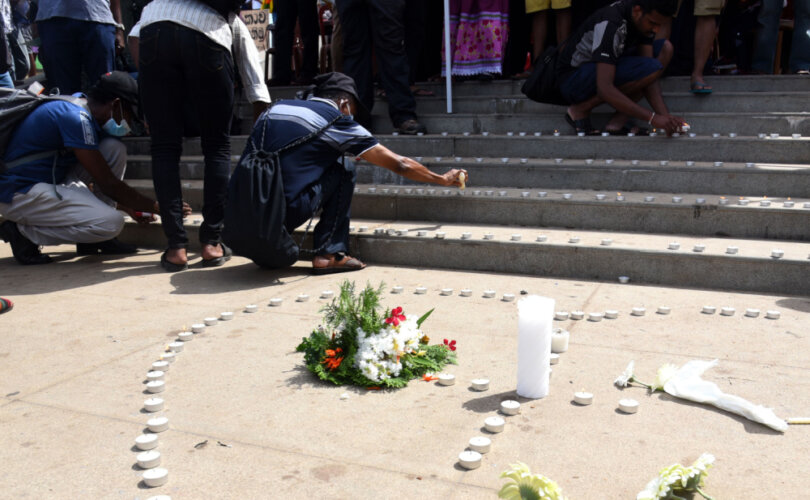 Remembrance of the victims of the 2019 Easter Sunday bombing attack in Sri Lanka at the Galle Face Colombo on April 17, 2022Shutterstock

(LifeSiteNews) — The persecution of Christians has risen throughout the world according to Open Doors’ recently published World Watch List 2023, a report that has been published annually since 1993.

Help a heroic Nigerian bishop feed orphans and widows
Bishop Oliver Doeme needs urgent help to meet the needs of persecuted Christians who have been made widows and orphans in his diocese as a result of Islamist attacks.

World Watch List called North Korea “a brutally hostile place for Christians to live.” The report revealed some of the details of the hostility to which Christians are subjected. Information is difficult to obtain due to the extreme secrecy and surveillance of the dictatorial regime that attempts to control nearly all aspects of human life in the country.

“If discovered by the authorities, believers are either sent to labor camps as political prisoners where the conditions are atrocious or killed on the spot – and their families will share their fate as well,” according to World Watch List. “Christians have absolutely no freedom. It is almost impossible for believers to gather or meet to worship. Those who dare to meet must do so in utmost secrecy – and at enormous risk. A new ‘anti-reactionary thought law’ makes it amply clear that being a Christian or possessing a Bible is a serious crime and will be severely punished.”

“A report issued in 2022 by The International Bar Association and The Committee for Human Rights in North Korea said that Christians are particularly targeted and exposed to torture in North Korean prisons. Detention periods have been documented as being longer for Christians than other groups, and witnesses have reported that “identified Christians are interrogated for longer periods, usually under torture,” and subjected to some of the worst forms of torture to force them to incriminate others during interrogation.’”

In an “overview of persecution trends” an account was given of the violence inflicted on Christians in Sub-Saharan Africa, China, the Middle East, and Latin America.

In Sub-Saharan Africa, violence “has reached new heights” due to political destabilization by Jihadists in West and Central Africa. According to the report, “Entire countries are at risk of collapse into extremist violence.”

RELATED: Democrats in the US ‘look away’ from persecution of Christians in Nigeria, African bishop says

“The jihadist movement, which seeks to expand Sharia across the continent, has forced Christians into constant motion, from their homes to displacement camps, or to other countries. The insecurity stemming from this experience of forced displacement makes Christians even more vulnerable to further violence. Christian women, in particular, can be easily targeted for sexual attack, while men are more likely to lose their lives.”

RELATED: Over 50 Nigerian Christians remain in captivity after Islamic attack on Christmas Day

Detailing the spread of the Chinese model of totalitarian rule and oppression, World Watch List stated that “the apparent success of China, especially in economic terms, is appealing to many leaders around the world.” The result has been the adoption of its oppressive policies in Sri Lanka, Myanmar and Malaysia, which have now joined Central Asian countries like Azerbaijan, Kazakhstan, Kyrgyzstan, Tajikistan, Turkmenistan, Uzbekistan and Russia.

World Watch List reported that “the mere existence of Christian communities is a thorn in the flesh of the regimes in many of these countries — even more so if Christian activists raise their voice frustrating the regime’s attempts to control its citizens. Using the language of ‘stability’ and ‘security,’ autocrats put immense pressure on church leaders in response to their persistent call for the respect of human rights, free participation of civil society, the rule of law, and election transparency. Those who refuse to support the ruling party can be branded as ‘troublemakers,’ ‘disturbers of the peace’ or even ‘terrorists.’ They face arrest, demolition of church buildings, and the loss of church registration.”

In the Middle East, there has been little recovery from the attempts of Islamic States and extremists “to wipe out Christianity entirely.” As the report details, “Ever since the Islamic State group (IS) arrived on the scene, Christians in those areas of Iraq and Syria have been struggling to earn a living; young Christians in particular face high unemployment and continual hostility, thus encouraging their desire to emigrate.” Emigration, however, simply further diminishes the presence of Christians in the Middle East, making the survival of churches even more difficult.

Additionally, “Converts to Christianity from Islam continue to face high levels of pressure from family and community,” since according to Islamic law, conversion to Christianity is an apostasy punishable with death.

— Article continues below Petition —
Stand with brave priest who was SUSPENDED after defying the LGBT agenda against his abbot’s wishes!
Show Petition Text
12085 have signed the petition.
Let's get to 12500!
Thank you for signing this petition!
Add your signature:
Show Petition Text

RELATED: Iraqi Catholic reveals the need for spiritual renewal of Christians in the Middle East

Regarding the Church in Latin America, where four countries rank among the top 50 for persecution, World Watch List reported that “government repression in Nicaragua, Cuba and Venezuela has intensified against those who are seen as opposition voices. In Nicaragua especially, communist repression of church leaders became increasingly visible during the year.”

Reflecting last fall on the need to witness to the faith even in the face of persecution and death, Cardinal Joseph Zen, who has suffered many times under the communists in Hong Kong, declared during a Mass after an arrest by the authorities: “Martyrdom is normal in our Church. We may not have to do that, but we may have to bear some pain and steel ourselves for our loyalty to our faith.”