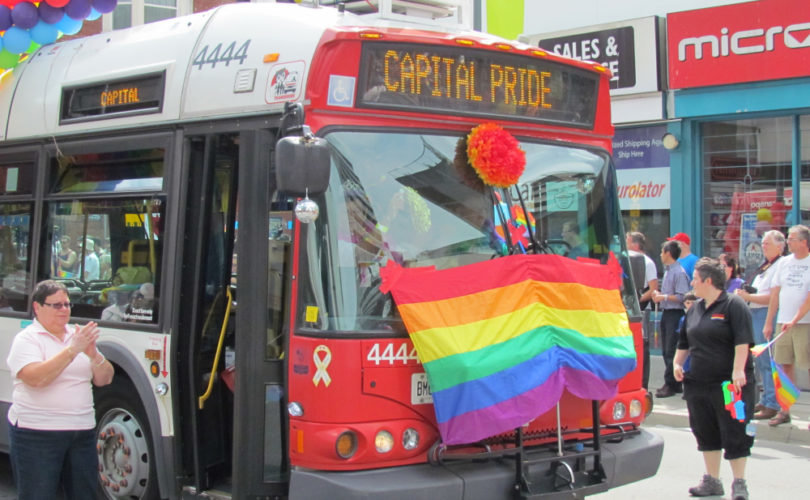 OTTAWA, August 18, 2015 (LifeSiteNews) — An outraged Catholic is campaigning for Ottawa Mayor Jim Watson to change the time of the city’s August 23 Pride parade, charging that the new route and schedule will have the lewd and loud spectacle marching past St. Patrick’s Basilica during its midday Sunday Mass.

Mary Hall told Watson in an email that the Pride parade’s 1:00 p.m. start means the noise of the raucous march – which traditionally includes semi-nudity and salacious dancing – “will intrude on the Mass as it goes by the church’s open windows during the most sacred part of the most sacred Catholic worship.”

“Did you really intend that?” Hall questioned Watson. “It is incredibly disrespectful and discourteous, and certainly casts this city in a bad light.”

LifeSiteNews’ Patrick Craine, who reported from the 2013 march, described it as “a large-scale, state-backed celebration of kinky sex” and observed that “the drive to glorify illicit sex … animates the entire event.”

The current “timing of the event will significantly and negatively impact on my freedom to worship,” Hall pointed out to Watson, but starting the parade an hour later “would eliminate the specific conflict.”

Watson’s office had not returned repeated calls from LifeSiteNews by deadline.

Archbishop Terrence Prendergast was out of town for a weeklong retreat and could not comment, according to spokesperson Joanne Mindeau. Similarly, the pastor and priests at St. Patrick’s were also on retreat, returning Friday.

Hall told LifeSiteNews that the Pride route change was announced at St. Patrick’s last Sunday, including that parking would be unavailable, that the parade would be going by, and that the traditional prayer, the Angelus, would be dropped from before the August 23 Mass because of time restrictions.

“For me that was just wrong. We always say the Angelus before the 12:15 Mass,” Hall said.

The same day she fired off an email to Mayor Watson. Hall, an active parishioner at St. Patrick’s, is urging people to follow her lead and contact the mayor.

“I am angry that the city made the terrible decision regarding the timing and the route of the gay pride parade,” she noted in a group email. “I invite anyone who feels the same way to also send a message asking the Mayor fix the problem the city created.”

She reproached Watson and his staff for not knowing that “St. Patrick’s is the biggest Catholic parish in Ottawa, seeing many thousands of people through its doors every week.”

“Because it is a traditional parish in a beautiful church with wonderful liturgical music, people come from all over the national capital region to worship there,” Hall stated, adding that there are six Sunday Masses.

The 137-year-old basilica, the oldest church serving the city’s English-speaking Catholics, also attracts many tourists during the summer, Hall pointed out, “Imagine what their reaction would be if they attended next Sunday!!”

Meanwhile, St. Joseph’s Parish, run by the Oblates of Mary Immaculate, announced in last Sunday’s bulletin that it will, once again, be attending the Pride march.

“Pride parades are celebrations for everyone, whether straight, gay, bisexual, transgender or cisgender. They celebrate self respect and dignity, and they celebrate LGBT friendly communities that live justice, equality and compassion for all,” read the bulletin announcement.

Capital Pride chair Tammy Dopson told the Ottawa Citizen that the new parade route centers around the city’s “gay” district. “We like the idea of keeping the momentum around the village.”

The Pride parade, which ends the weeklong Capital Pride Festival that began Monday, starts at Bank and Gladstone, proceeds west to Kent, north to Laurier, east to Bank and south to Somerset.

The event was dogged with controversy last year when the previous organizers declared bankruptcy in December 2014 after defaulting on more than $100,000 it owed to suppliers and participants, including the City of Ottawa.

But the city nevertheless voted in March 2015 to give $37,000 to the new festival organization, which is partnered with the Bank Street Business Improvement Area.