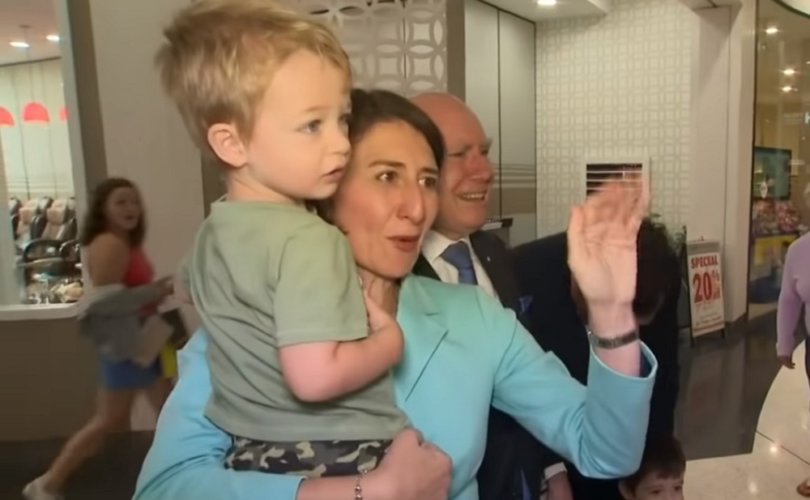 SYDNEY, September 19, 2019 (LifeSiteNews) — The dismal failure of an ‘empty chair’ leadership tilt against New South Wales premier Gladys Berejiklian by rebel M.P. Tanya Davies and senators Matthew Mason-Cox, MLC and Lou Amato, MLC has still resulted in a moderate level of success, with the amendments, previously rejected out of hand, allowed to go before the upper house for debate.

The spill motion was withdrawn Tuesday morning, partly also due to Premier Berejiklian’s decision that a leadership vote would only be by a show of hands in the party room rather than by the customary secret ballot.

Victorian and fellow Liberal M.P. Bernie Finn told LifeSiteNews, “I don’t think that would be tolerated in any other parliamentary party in Australia. I was absolutely gobsmacked at that. It’s interesting to see the lengths that some people will go to thwart the rights of members of parliament. Absolutely extraordinary when you consider they are also members of her government. I doubt this will be forgotten for a very, very long time.”

The fact that the leadership challenge was even attempted by three members of the Berejiklian government will leave a permanent mark on her leadership.

Finn, who noted the complete absence of disclosure about intentions to decriminalise abortion prior to the election, stated, “As a member of the Liberal Party, quite frankly, I am ashamed of the performance of the leadership of the New South Wales government over the last couple of months. The Nationals Party itself has to take a good look at the reason for its existence. At the moment it is in with the Greens. It’s either a conservative party or it’s a left progressive party, and at the moment it’s in with the Greens. It’s hard to see how any conservative could vote for the New South Wales Nationals at a state level.”

Finn had previously noted on social media the number of “Labor types” throwing their support behind the troubled Liberal premier.

The events of the past 48 hours also affected the ability of two rebel pro-life M.P.s to remove the government’s majority should their mandatory four amendments not be passed. In the statement announcing the leadership challenge, Tanya Davies declared it to be the better option than simply leaving the party, giving herself an exit from the prior solid commitment of three weeks. This leaves the remaining M.P., Kevin Conolly, still committed but without the power they would have wielded together to plunge the government into a minority position.

Internally, the faction of pro-abortion M.P.s have been “clearly frustrated” with the prospect of any amendment being passed. However, as the day wore on, they did become increasingly confident of their success.

An amendment against sex-selective abortions was originally looking good but failed at the vote as negotiations broke down. An amendment for pre-abortion counselling was also defeated, but a competing counselling amendment for only post-22-week abortions succeeded. Another successful amendment ensured that babies delivered alive during the abortion procedure would be given health care. The name of the bill was also amended to change from the Reproductive Health Care Reform Act to the Abortion Law Reform Act, giving a small victory over the spin of abortions being merely health care.

A modified bill will be sent back to the lower house next week for a fresh vote on its new form. For pro-abortion M.P.s pushing the abortion decriminalisation bill, the threat from amendments has been their biggest concern, as they have the potential to neutralise the practical gains of what they hoped to achieve with this bill, or worse. Now the lower house with its differing political makeup will be compelled to decide if it is prepared to accept the bill that was returned to it.

For a piece of legislation Premier Berejiklian tried to put through parliament in record time, it’s been anything but smooth sailing.