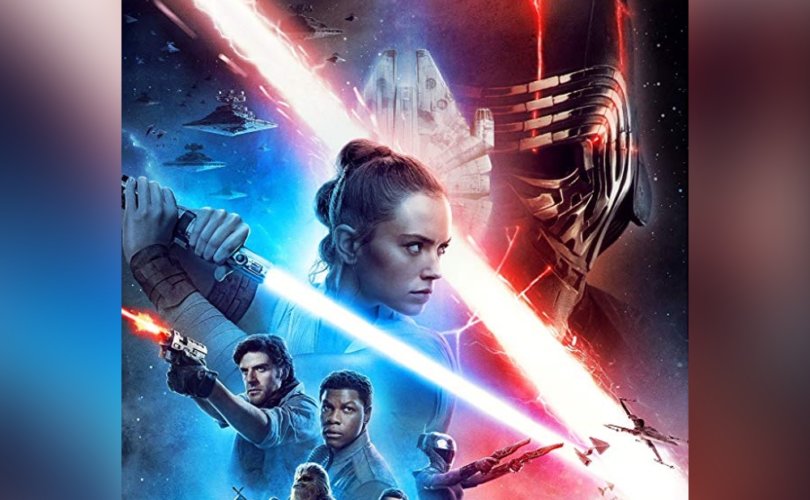 Star Wars: The Rise of Skywalker

“In a celebration sequence in the film, two female members of the Resistance share an exuberant kiss during the joyful moment,” according to The Hollywood Reporter. “They are minor characters and not heavily featured in the film.”

Director J.J. Abrams had hinted weeks ago that “Star Wars Episode IX: The Rise of Skywalker” might feature an LGBT character or scene.

“In the case of the LGBTQ community, it was important to me that people who go to see this movie feel that they’re being represented in the film,” said Abrams during promotional interviews in the runup to the film’s premiere. At the time, he wouldn’t give away whether Episode IX might see another character stated to be or depicted as LGBT in some way, but he quipped that “I did just say what I just said.”

The Star Wars franchise is owned by Disney.

LGBT Star Wars fans had hoped for years that two male characters who had appeared in 2015's “Star Wars Episode VII: The Force Awakens” — Poe Dameron (Oscar Isaac) and Finn (John Boyega)— would develop a romantic relationship in future episodes, but Abrams had recently nixed that idea in an interview with the movie trade publication Variety.

Referring to the on-screen chemistry between Poe Dameron and Finn, Abrams said, “That relationship to me is a far deeper one than a romantic one,” which challenges the notion of most homosexuals that intimate relationships between males must include a romantic/sexual component.

“It is definitely progress for a franchise that has previously eschewed depictions of LGBT+ people on screen,” stated Pink News.

“It is the first time a Disney-owned blockbuster has featured a same-sex kiss, and will likely prove a test in markets where censors prohibit depictions of homosexuality on screen,” it added.