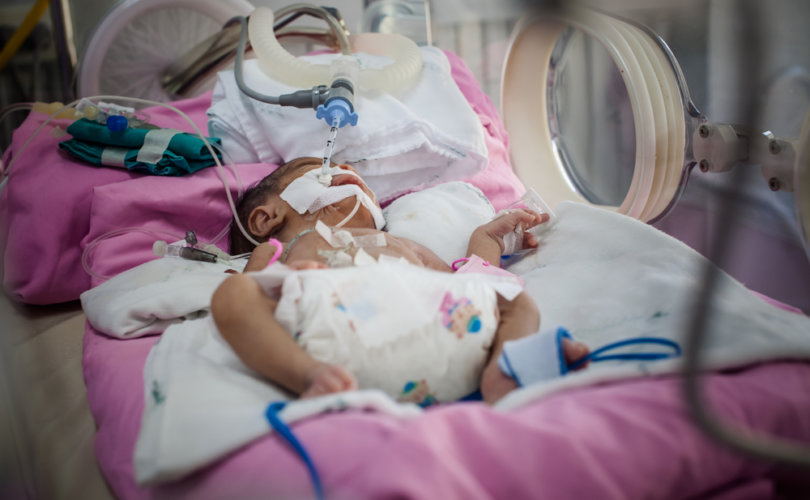 May 26, 2016 (LifeSiteNews) – A new study has found that more than two-thirds of babies born at 22 or 23 weeks can survive if given medical treatment.

Researchers studied a total of 106 babies born extremely prematurely, at 22 and 23 weeks respectively. Of those infants, 86 received medical care – and 67 percent survived.

That builds on a separate study published last May in the New England Journal of Medicine, which found nearly identical rates of survival for babies born at 22 weeks who received medical treatment.

Those findings are leading experts and bioethicists to question whether the standard of viability should be revised.

That's significant, because the Supreme Court has ruled that “a state may not prohibit any woman from making the ultimate decision to terminate her pregnancy before viability.”

Roe v. Wade set fetal viability at 28 weeks in 1973. By 1992, scientific advances required the Supreme Court to change that to 24 weeks in Casey v. Planned Parenthood.

But the standard has not been revisited in 24 years, longer than the gap between Roe and Casey.

University of Iowa pediatrics professor Dr. Edward Bell has told the New York Times that he considers 22 weeks to be the new age of viability.

The dense scientific data blazed to life in February, as a baby said to be born at 21.5 weeks briefly survived a botched abortion.

After the abortionist, Eleanor Stanley, pronounced the baby dead, a facility worker saw the child move. In a chilling 911 call, she said, “The fetus is breathing,” but the abortion facility was not equipped to provide life-saving medical treatment.

“A baby was born alive at 21 weeks and rather than being rushed to the NICU, he suffered, awaiting medical care the abortion clinic was incapable of providing,” said Susan B. Anthony List President Marjorie Dannenfelser. “That this child could die with so little national attention speaks to the callous state of our laws on abortion.”

Polls consistently show, while Americans are divided over whether they call themselves “pro-life” or “pro-choice,” a hefty majority favor tighter restrictions on abortion than those now in effect.

“The status quo espoused by Hillary Clinton – legal abortion-on-demand, up until the moment of birth – is a position most Americans reject,” Dannenfelser said. “There is well-documented support for legislation granting equal protections for babies born alive after a failed abortion.”

The Pain Capable Unborn Child Protection Act is “a line we have set in the sand, and a line GOP Presidential candidate Donald Trump has agreed to,” she said. “Hillary Clinton has declared that the ‘unborn person’ has no constitutional rights.’”

“Would she support either of these bills, which would have saved this child?” Dannenfelser asked. “The American people have a right to know the answer in this year of decision.”

An abstract of the new study, published in the Journal of the American Medical Association (JAMA) Pediatrics, may be read here.

Baby Celeste, born at 22 weeks, only survived 3 hours, but her life changed the world

Heather was born at 20 weeks, well before ‘viability.’ 11 years later, she’s thriving.
Why ‘viability’ is a meaningless standard for human rights