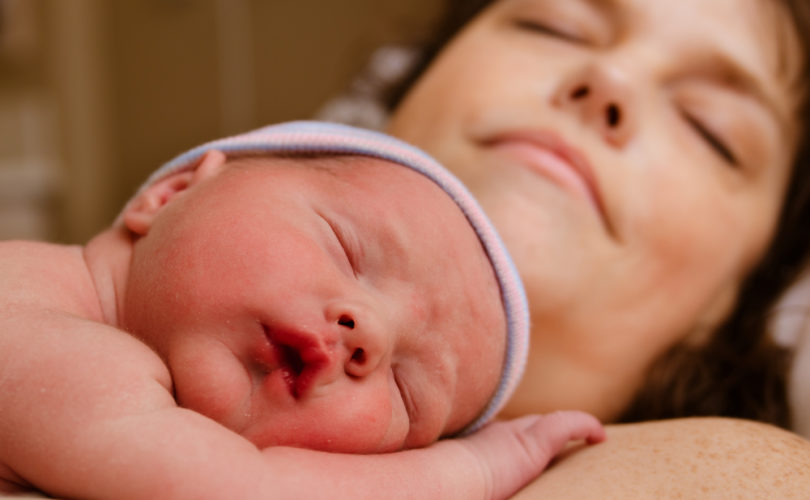 CHAPEL HILL, NC, June 9, 2015 (LifeSiteNews) – A new study recommends that doctors implant IUDs into new mothers' wombs while they are still in the hospital for childbirth, in an effort to increase the number of American women fitted with the abortifacient device.

Previously, new mothers were told to wait six months after birth to have an intrauterine device implanted. But a new study published in Obstetrics and Gynecology says too often women do not return to have an IUD implanted, and as a result, get pregnant.

Patients at North Carolina Women’s Hospital in Chapel Hill were studied and researchers found that women who received IUDs during cesarean sections were more likely to have them six months later than women who were told to return to the doctor’s office to receive one.

So, the professionals say, implant IUDs at childbirth.

The American Life League considers the North Carolina study's recommendations medically irresponsible, because women who have just given birth are far more vulnerable, physically and emotionally, than after waiting six months to consider a major life decision like surgically implanted “contraception.”

“Medically speaking, this push to implant IUDs immediately after delivery is a travesty,” Rita Diller, the national director of the American Life League’s Stop Planned Parenthood Project, told LifeSiteNews. “Abnormal bleeding, one of the signs of uterine perforation, could be missed in the days following delivery, since women are already bleeding at that point.”

“It is extremely disturbing that mothers who have just delivered their babies are being encouraged to accept IUDs,” Diller said. “Uterine walls can be softer than usual in postpartum women, increasing the risk of uterine perforation and even resultant IUD migration to other parts of the body, which can cause additional internal injuries.”

The complications with surgical implantation of IUDs are magnified when implantation takes place at a new mother's childbirth.

“IUDs also increase the risk of ectopic pregnancies and contribute to infections like pelvic inflammatory disease. More than 70,000 Mirena IUD complications have been reported to the FDA since 2000,” Diller elaborated. “In New York and New Jersey alone, there are over 1,000 lawsuits on file for IUD injuries.”

No mention was made in the study of the fact that an IUD is not “contraception” at all, but is an abortifacient. The IUD stops implantation, not just conception, up to 95 percent of the time, according to the Life Issue Institute, based in Cincinnati.

The IUD destroys the ability of the already fertilized egg – the “conceptus” – to implant in the uterine wall. Because s/he cannot implant in the mother's womb, the conceived child dies.

“IUDs are intended to close off all hope of life developing in the womb, and take away a woman’s ability to be open to life, and to snuff out the life of any child who may begin developing while the device is in place,” Diller explained. “The womb is intended by God to be a place of life, not a tomb.”

The Obama administration's Department of Health and Human Services admitted that intrauterine devices cause early abortions. IUDs can inflame the lining of the uterus, making implantation of a newly conceived child impossible, inducing abortion.

A government report put out by the Center for Disease Control singles out the use of IUDs, calling them “as effective as sterilization.” Brian Clowes of Human Life International puts it clearly: “All of the longer-acting methods sometimes act as abortifacients…which will actually lead to an increase, not a decrease, in total abortions,” he told LifeSiteNews.

The new North Carolina study's recommendation follows similar recommendations from the World Health Organization (WHO), which encourages the use of abortion-inducing “contraception” for new mothers around the world.

Along with the new study, the publication printed an editorial by Dr. Lisa M. Goldthwaite, who wrote, “We are meeting a woman’s needs better when they get their contraception at the time of delivery.”

Dr. Erika E. Levi, assistant professor of obstetrics and gynecology at Albert Einstein College of Medicine in the Bronx, explained, “We need to make it easier for women to get access to the kind of contraception they want as new mothers.”

In 2010, the Cochrane Database of Systematic Reviews found that four times as many women who get an IUD implanted at childbirth expel the device (eight percent), compared with those placed later (two percent).

Diller concluded, “It is unconscionable for medical personnel to pressure women, when they are extremely vulnerable following a delivery, to be implanted with devices that may have very negative long-term consequences on their health and actually take the decision to be open to life out of their hands.”