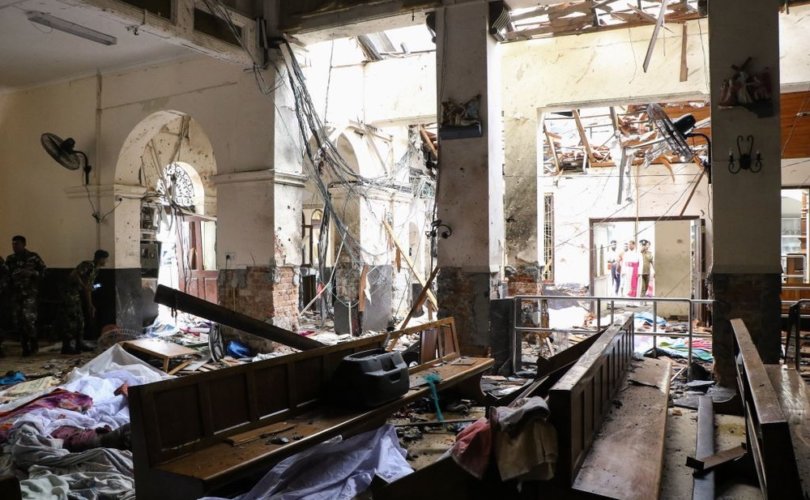 Local police have joined foreign embassies to warn about future attacks on worshippers. Cardinal Malcolm Ranjith has cancelled Masses at Catholic parishes through the weekend and Muslim leaders have called for the cancellation of Friday prayer services.

Authorities are reportedly seeking at least one terrorist believed to possess explosives while they pursue credible information that the Muslim National Thowheeth Jama’ath terrorist organization, which is believed to have carried out the deadly Easter Sunday bombings, is planning attacks targeting Sufi Muslim worshippers.

Sufism is a sect of Islam that is persecuted by other strains of the religion. Sufi Muslims have expressed concern for several years about the influx of extremist Muslims who belong to the Wahhabi sect, which is dominant in Saudi Arabia.

On Easter Sunday, suicide bombers unleashed explosives at three churches and three hotels in Sri Lanka, killing at least 350 persons. At least 100 worshippers were killed during Mass at one of the two Catholic churches attacked.

President Maithripala Sirisena failed to act on advance warning he had of the attacks. Seeking to deflect criticism, he has sought the resignation of Pujith Jayasundara, the inspector general of the police, and Hemasiri Fernando, the defense secretary. As of Thursday, neither had done so.

The U.S. embassy has warned of continued attacks, and the Israeli Counter-Terrorism Bureau issued Thursday a warning of a “high concrete threat” in Sri Lanka. Officials have stepped up security, placing roadblocks around the country and limiting access to the international airport. Police have arrested three persons and had as many as two dozen grenade-like bombs, according to local media.

According to CNN, officials arrested and then released Ilham Ibrahim, the son of wealthy spice merchant Mohammad Yusuf Ibrahim. The younger Ibrahim and brother Inshaf blew themselves up in the attack. The elder Ibrahim is now in custody.

In neighboring India, authorities are stepping up security around churches as a precaution against attacks. Sacred Heart Cathedral in New Delhi is under Army guard and the governor of Goa — a former Portuguese colony that is home to more than 200 churches — has asked for security. It was based on Indian intelligence that Sri Lankan police sent a memo on April 11 to Sri Lankan intelligence about a pending attack. Cardinal Ranjith, the archbishop of Colombo, joined government officials criticizing the government’s failure to act on intelligence.

The Islamic State, the same terrorist Muslim sect that has afflicted Syria, Iraq and Lebanon for years, claimed responsibility for the deadly suicide bombing attacks that claimed more than 320 lives and 500 wounded on Easter Sunday in Sri Lanka.

Cardinal Ranjith called on the government to punish the perpetrators “mercilessly,” saying that “only animals can behave like that.”

The Islamic State of Iraq and Syria (ISIS) proclaimed its authorship of six nearly simultaneous suicide bomb attacks. The government of Sri Lanka has suggested that the bombings were retribution for shootings at two mosques in New Zealand, where a deranged gunman took the lives of 50 people. According to a statement released Tuesday by ISIS’ propaganda arm Amaq, “Those that carried out the attack that targeted members of the US-led coalition and Christians in Sri Lanka the day before yesterday are Islamic State group fighters.”

Sri Lanka’s Christian minority amounts to about seven percent of the south Asian nation’s 21 million people. Most of the country’s Christians are Roman Catholic. Muslims constitute approximately eight percent of the population, which is mostly Hindu or Buddhist. The terrorists struck three hotels popular with tourists in Colombo, two Catholic churches in the Colombo region, and an evangelical Christian church in Batticaloa, on Sri Lanka’s eastern shore.

The roof of one of the churches was blown off by the blast, which left human flesh and body parts spattered on its interior walls. Some of the bodies, according to local reports, were difficult to identify because of the ravages of the explosion.

On Twitter, Cardinal Robert Sarah denounced the “barbaric Islamist violence” witnessed on Easter Sunday. Cardinal Sarah tweeted, “As we celebrate the resurrection of the son of God, the terrible attacks in Sri Lanka once again show how the followers of Christ are all over the world the victims of wild and foolish deeds.”

A native of Muslim-majority Guinea, Cardinal Sarah holds the highest rank of any African at the Vatican. “I condemn this barbaric Islamist violence. Pray,” he wrote.

During the Easter Sunday Mass at the Vatican, Pope Francis expressed his “loving closeness to the Christian community, targeted while they were gathered in prayer, and all the victims of such cruel violence.”

As we celebrate the resurrection of the son of God, the terrible attacks in Sri Lanka once again show how the followers of Christ are all over the world the victims of wild and foolish deeds. I condemn this barbaric Islamist violence. Pray. + RS pic.twitter.com/z2el8c3nJN

The eight sites of the Easter Sunday explosions included:

According to reports, authorities have arrested at least 40 people during a probe into the blasts. It was the worst bout of terrorism in Sri Lanka since the official end 10 years ago of a civil war that pitted the government against ethnic Tamil terrorists for decades. It was the worst instance of anti-Christian violence in the country’s history.

Bouts of violence between Buddhists and Muslims have seen an upswing in recent years, however.

On Tuesday, Sri Lanka observed three minutes of silence at 8:30 a.m. local time, which was the hour at which the first suicide bomber struck on Sunday. Tuesday is designated a national day of mourning while survivors bury their loved ones. More than 1,000 people gathered to mourn at St. Sebastian Catholic Church in Negombo, a town near Colombo, where one of the coordinated attacks occured. Earlier Tuesday, the government declared a state of emergency, which provides special wartime powers to police and military forces.

According to AFP, Father Suranga Warnakulasuriya went from his parish to assist at the funerals in Negombo.

“It's very hard to bear,” he said. “For me, it is very difficult, so imagine how hard it is for the loved ones.” At least 100 of the dead on Sunday were worshippers at St. Sebastian’s.

Local officials are probing why more precautions were not taken in advance of the attacks. According to a government spokesman, a  “foreign intelligence agency” had reported that a Muslim terrorist group had been planning suicide attacks against Christians. The warning was not conveyed to Prime Minister Ranil Wickremesinghe or other top ministers. The prime minister was ousted in 2018 and has not been allowed to attend security council briefings since October as part of a power struggle, thus leaving him in the dark about critical intelligence.

The death toll includes nationals from Sri Lanka and other countries. Among the dead are at least four Americans, including a child. A Danish billionaire lost three of his children in the attacks, and the Netherlands lost three citizens. Others included nationals of Australia, France, Japan, Portugal, Saudi Arabia, Spain and the United Kingdom. The United Nations said at least 45 children were among the dead.

Wickremesinghe pledged to “vest all necessary powers with the defense forces” to act against the perpetrators. those responsible. The government is blocking social media, contributing to confusion.

Some intelligence officers were aware of this incidence. Therefore there was a delay in action. What my father heard was also from an intelligence officer. Serious action need to be taken as to why this warning was ignored. I was in Badulla last night pic.twitter.com/ssJyItJF1x

Sri Lankan Minister of Telecommunications Harin Fernando tweeted Sunday, “Some intelligence officers were aware of this incidence. Therefore there was a delay in action. What my father heard was also from an intelligence officer. Serious action need to be taken as to why this warning was ignored….” He included a photocopy of the apparent intelligence memo that warned of the attack.