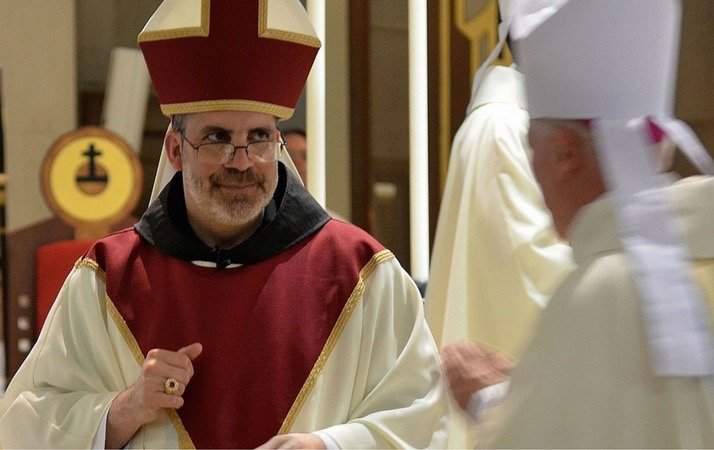 Bishop John Stowe at his consecration on May 5, 2015

LEXINGTON, Kentucky, December 23, 2016 (LifeSiteNews) — A U.S. bishop first appointed last year by Pope Francis is defending his decision to speak at a gay activist conference in April 2017 put on by a “Catholic” group condemned by the Vatican. The bishop argues that he is following the pope’s example of being “merciful” while reaching out to those in the “periphery.”

Bishop John Stowe of the Diocese of Lexington in Kentucky is scheduled to speak at New Ways Ministry's symposium April 28–30 in Chicago. The event is titled: “Justice and Mercy Shall Kiss: LGBT Catholics in the Age of Pope Francis.”

Stowe defended his decision to speak at the event in a December 15 radio interview on the Mike Allen Radio Show after Church Militant highlighted the matter in a December 9 report.

“I think Pope Francis has signaled that we need to take another look at those things (homosexuality) and I think that Pope Francis has also given us the example, that is, the Church doctrine, the Church teaching has not changed, but the way we approach it has to be merciful,” he said.

New Ways Ministry describes itself as a “gay-positive ministry of advocacy and justice for lesbian and gay Catholics.” It advocates for same-sex “marriage” and the acceptance of the homosexual lifestyle.

The group’s founders, Sr. Jeanine Gramick and Fr. Robert Nugent, were investigated and condemned by the Vatican’s Congregation for the Doctrine of the Faith in 1999 for their “erroneous and dangerous” teaching and were “permanently prohibited from any pastoral work involving homosexual persons,” an order they both defied.

New Ways Ministry has also been condemned by the United States Conference of Catholic Bishops (USCCB) on two occasions, and they have been banned from Catholic venues in numerous dioceses. In 2015, they were banned from holding an event in a Catholic parish at the World Meeting of Families in Philadelphia.

In 2010, then USCCB president Chicago Cardinal Francis George stated that Catholics can be assured that “in no manner is the position proposed by New Ways Ministry in conformity with Catholic teaching and in no manner is this organization authorized to speak on behalf of the Catholic Church or to identify itself as a Catholic organization.” The condemnation was reaffirmed in 2011 by Washington Cardinal Donald Wuerl, USCCB chairman of the Committee on Doctrine.

But during his radio interview Bishop Stowe erroneously referred to News Ways Ministry as a “ministry within the Church” that was “controversial.”

“I have come to know individuals who are associated with New Ways Ministry…and every one of them I have spoken to are genuine, sincere people of faith who are trying to reconcile their own sexual orientation with the Church that they love and that they have been raised in,” he said.

“They feel hurt that the Church defines them as 'intrinsically disordered.' I think it is fair to say that the language is not helpful, although we strive and do our best to explain what that language means — the philosophical system out of which that kind of language arises — but you know we live in the age of sound bites and to hear just that phrase is tantamount to hearing an outright rejection. Well, that can’t be the message of the Gospel. That was not Jesus’ approach,” he added.

The Catholic Church, however, has never defined people with same-sex attraction as “intrinsically disordered,” but their actions.

“Basing itself on Sacred Scripture, which presents homosexual acts as acts of grave depravity, tradition has always declared that ‘homosexual acts are intrinsically disordered,” states the Catechism of the Catholic Church, adding that same-sex attracted persons must “be accepted with respect, compassion, and sensitivity.”

When asked in the radio interview if the Church will ever change its teaching on homosexuality, Stowe hedged, saying that “change does come over a long period of time in the way that the Church approaches a number of issues.”

“We cannot hide ourselves by excluding ourselves from scientific research and from the development of human knowledge,” he said.

He claimed the Church has “evolved” on moral issues before, using the Church's previous condemnation of usury as an example.

“You don’t hear the Church condemning banks or the whole foundation of the Capitalist system – which is based on usury, the borrowing and lending of money. So, that’s something we’ve had to evolve in our understanding, despite the fact that you can find clear Old Testament prohibitions of it.”

He also said that while the Church at one point “justified” the existence of slavery, it has now evolved to fighting it.

“We can’t say that these teachings [on homosexuality] are immune from ever changing,” he said.

When asked if practicing homosexuals could expect in their lifetime for the Church to view homosexual acts as morally licit, Stowe, instead of affirming Catholic teaching on the matter, replied: “I don’t want to go that far; I don’t know if that would ever be the outcome of it.”

He said that as bishop he “promised to uphold the teachings of the Church as they are now.”

When asked how he would respond to those Catholics who hold to the “consistency of truth throughout the ages” especially in regard to the Church’s teaching on human (sexual) behavior, Stowe, instead of affirming that Christ and his teachings are the same yesterday, today, and forever, seemed to suggest that truth in one age is different from truth in a previous age.

“Well, in what other area of their lives would [these Catholics] be following a way of thinking that is from the 1st century, from the 5th century, or from the 18th century? The Word of God is constantly refreshing and constantly new…[but] the Scriptures don’t give us absolute certainty, they don’t give us black and white descriptions for many of the [moral] areas that we address,” he said.

LifeSiteNews reached out to Bishop Stowe and asked how he reconciled his position that the Church can “change” and “evolve” on moral issues such as homosexuality over time with his position as a Catholic bishop and his Oath of Fidelity, but did not receive a response by press time.

The bishop also did not respond when asked by LifeSiteNews if he was concerned that his presence at the New Ways Ministry event would lend legitimacy to the group’s open dissent from Church teaching on sexuality.

During his radio interview, Stowe called his invitation to address the group’s event as “fruits of the year of mercy.”

“It would be irresponsible not to accept an invitation if that were possible,” he said.