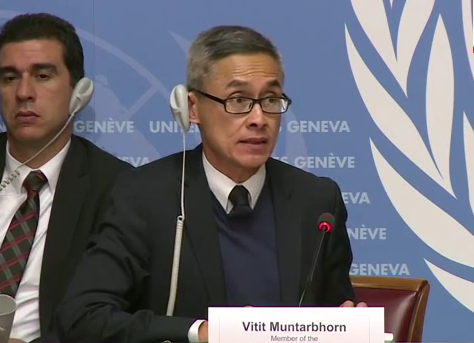 December 12, 2016 (C-Fam) – With his job still on the line, the newly appointed UN independent expert for lesbian, gay, bisexual, and transgender (LGBT) rights laid out a provocative agenda for his 3-year term a couple weeks ago.

“This mandate will cover every country under the sun and under the moon,” Thai Professor Vitit Muntarbhorn is reported to have said, further antagonizing countries that have already promised not to cooperate with him.

His speech at an international LGBT conference in Thailand effectively dared the UN General Assembly either to suspend him or watch him promote an eclectic and far-reaching gamut of policies to further the homosexual agenda internationally.

He not only promised to work to achieve widely agreed upon goals like ending violence against individuals who identify as LGBT, but also goals that do not enjoy political support even in socially liberal countries, like curtailing religious freedom and incorporating LGBT issues in the UN peace and security agenda.

Muntarbhorn’s agenda was summed up in 5 points: decriminalizing sodomy, preventing mental health professionals from treating homosexuality as a disorder, ensuring legal documents reflect individuals’ subjective gender identity, imposing social acceptance of homosexuality, including by challenging religions, and indoctrinating children and society through propaganda at all levels.

His declarations come as the General Assembly considers placing his mandate on hold until it has an opportunity to review the very close decision of the 47-member strong Human Rights Council in Geneva to establish his post. Just 23 UN member states voted in favor of the mandate in Geneva. A decision is expected at the end of next week by all 194 UN member states in the General Assembly plenary.

The mandate, currently formulated as addressing “violence and discrimination on the basis of sexual orientation and gender identity” has been described as vague, overly inclusive, and not sufficiently specific as UN mandates are required to be.

The African Group of countries insisted during a very close committee vote two weeks ago that there was simply no legal basis for the mandate. They lost that vote by 84 to 77, with 17 abstentions, and with at least 18 countries that prohibit sodomy voting in a way inconsistent with their laws.

Many more supported the mandate even though they would not endorse the 5-point agenda put forth by Muntarbhorn. Countries that have LGBT-specific non-discrimination laws but do not recognize homosexual civil unions or permit homosexual adoption are likely candidates to support further review of the mandate.

Even before Muntarbhorn’s post was established in June, and he was appointed to it in September, opponents of the position assumed it would promote acceptance of broad agenda and not just focus on preventing “violence and discrimination on the basis of sexual orientation and gender identity” as the Obama administration and other Western governments insisted it would. The new 5-point plan fulfills the worst expectations of the critics of the post.