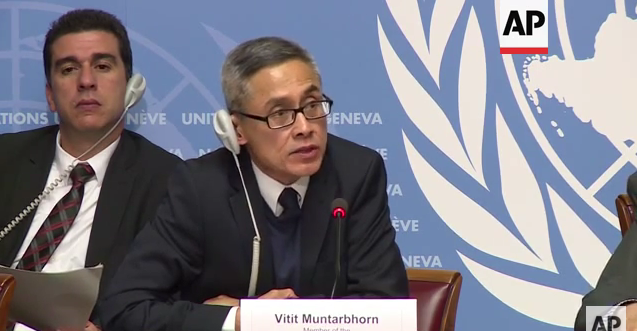 February 3, 2017 (C-Fam) – The new UN expert on lesbian, gay, bisexual, and transgender (LGBT) issues outlined a strategy for his three-year term before dozens of supportive UN bureaucrats, delegates, and activists in a meeting last week.

Vitit Muntarbhorn, the newly appointed UN Independent Expert on sexual orientation and gender identity, spoke of the Sustainable Development Goals and the work of UN agencies to further the goals as a “good entry point for us.”

The Thai law professor and homosexual activist also described health, education, and religion as “soft entry points” and cautioned that “sexual orientation and gender identity” are not closed categories, promising to ensure no group is overlooked.

Only supportive states attended the consultation. Others who opposed the creation of the post did not want to legitimize his work by attending the event.

Supportive UN agencies huddled in a tightly packed UN meeting room to describe their ongoing efforts to promote LGBT rights. Even though the UN post barely survived General Assembly scrutiny in December, the feeling of triumph was palpable. Even UN Habitat, which has held out against the LGBT agenda thus far, asked guidance on how to integrate LGBT rights in urban development.

Muntarbhorn explained that UN agencies would be exponentially more influential because of their resources.

He described education as an entry point for children to be “born and bred from a young age” with the right attitudes. Specifically he mentioned anti-bullying campaigns. Additionally on the health front, he suggested that the medical community be enlisted to condemn any form of therapy designed to help individuals cope with or change unwanted same-sex attraction.

A representative of the UN Children’s Fund (UNICEF) called for states to “provide LGBT couples and children with legal recognition of their family entity.” Muntarbhorn sounded a cautious note without excluding this entirely.

“I am not jumping into the right to marry as a first issue for this mandate even though it is an important issue,” he said. “The first issue is we are anti-crime, anti-killing, anti-torture,” he said, stressing a more limited reading of what constitutes “discrimination.” He also admitted to holding an open definition of family.

When confronted about the clash between LGBT rights and religious freedom by Henk Jan van Schothorst of the Transatlantic Christian Council, Muntarbhorn’s answers were categorical.

While calling for compromise, respect, and dialogue, he appeared irritated.

“We can agree or disagree on whether the family should be big or smaller, which is not totally settled” he said—perhaps a nod to population control—but emphasized that “whatever the differences, you can’t kill people. I’m sorry about that.”

Muntarbhorn described a desire to engage with the “heart of religion without the mythology overriding the heart of the religion.” He cited examples of traditions that welcomed homosexuality and transgenderism and denounced sodomy laws as a colonial imposition.

I would like to “open the door to a humane understanding and interpretation (of religion), conversant and complimentary with human rights,” he said, welcoming the invitation of the UN Population Fund to attend events with religious groups that support abortion and LGBT rights.