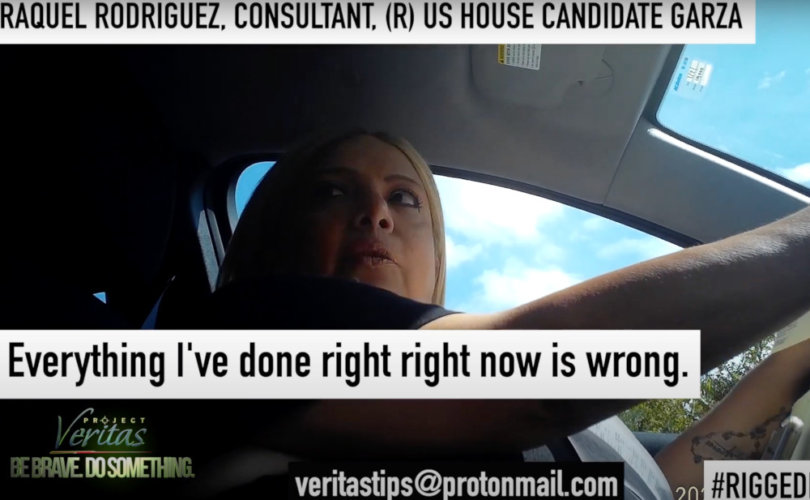 SAN ANTONIO, Texas, October 27, 2020 (LifeSiteNews) — Undercover journalists have discovered election fraud on a potentially massive scale in Texas, as voters are bribed and coaxed to vote for Democrats — including changing votes on the ballot.

Project Veritas today released a new video, documenting one woman in particular who claimed that she was “bringing at least at least 7,000 votes to the polls.”

Raquel Rodriguez from San Antonio, who officially works for a homosexual Republican candidate for Congress, Mauro Garza, is secretly a ballot chaser, bribing and coercing voters to change their ballot in favor of Democratic candidates.

The video remains unclear at times. It seems Rodriguez aims to get Democrats into the White House, as well as other positions, while also helping Republican Mauro Garza get elected to Congress. Rodriguez mentioned she intends to “flip all these Dems, but I got to flip them only for him,” meaning Garza.

The video footage shows Rodriguez persuading a woman to change her vote after having selected Sen. John Cornyn (R-TX): “If you want to change it you can, and then you can just put your initials here, so that way you’re voting for the straight Dem. Cause that’s what you want to do, correct? You want to vote for the entire, all the Democrats?”

Rodriguez continued by showing the woman how to change her vote in such a manner that would not arouse suspicion: “And you’re going to have to put like a line through it and your initials, so they’re going to know it was a mistake.”

“She didn’t vote for who we wanted her to vote for … That’s my job … I guess it is being persuasive … That right there is against the law,” Rodriguez explained to the undercover reporter.

After having convinced the woman to change her vote, Rodriguez then gave her a shawl as a gift. She mentioned that Garza had given her $2,500 to use for gifts, essentially to bribe people to support him.

“I do shawls, I do diabetic socks, I do wallets, I do rosaries,” admitted Rodriguez, listing the bribes she gives. The video is unclear as to whether these are used to convince people to vote for Democrat Joe Biden instead of Republican President Trump, or for Garza instead of Democrat Rep. Joaquin Castro.

Rodriguez collects ballots, especially from the older generation, and then mails them from different post offices in order not to arouse suspicion. She said she also fills in ballots in polling booths on behalf of voters.

The undercover journalist quipped at one point that President Donald Trump was right when he raised concerns about rigged elections, to which Rodriguez responded, “It’s true; ’cause you’re not supposed to do that.”

Another ballot chaser with whom Rodriguez works, Joanne Ramon, is described as having previously even registered votes for dead people in a funeral parlor and cemetery where she worked. In the 2008 elections, Ramon mentioned that she got “over 100,000 straight tickets” for the Democrats.

However, it is not just collected ballots that are being manipulated. Rodriguez mentioned she has “a black girl at the poll … because we need the black vote, and the gay vote.”

Rodriguez explains how she is convincing a voter, named Helen, to vote for “Biden … MJ Heger” but also “for my guy Mauro.” Helen is “a Republican … why is she going to vote for those two? Cause I asked her and I told her they’re better.”

— Article continues below Petition —
PETITION: Urge state legislatures to scrap universal mail-in ballots and help protect the vote
Show Petition Text
19122 have signed the petition.
Let's get to 20000!
Thank you for signing this petition!
Add your signature:
Show Petition Text

Rodriguez continued by describing the process of ensuring that Helen voted “the right way.” She said, “I already coached her … I had another voter go in with her. Why — because the other person is somebody that I trust.”

Project Veritas accused Rodriguez of having broken many state and federal laws.

Jered Ede, the chief legal officer for Project Veritas, explained that she had broken three separate state laws regarding harvesting of non-family member’s votes, for being paid to harvest votes, and for paying others to do so.

Ede also said that Rodriguez could “qualify for a sentence enhancement under Texas Election Code §276.012, which increases the penalty for ballot harvesting if three or more people are involved.”

Among other laws, Ede pointed out, she has also violated the Texas Election Code by prompting voters on how to vote which is punishable by up to a year in prison, and by convincing individuals to change their vote.

James O’Keefe, founder of Project Veritas, described it as “voter fraud system positioned to swing Texas in 2020” and noted that such actions “constitute a direct threat to the integrity of our election-based republic.”