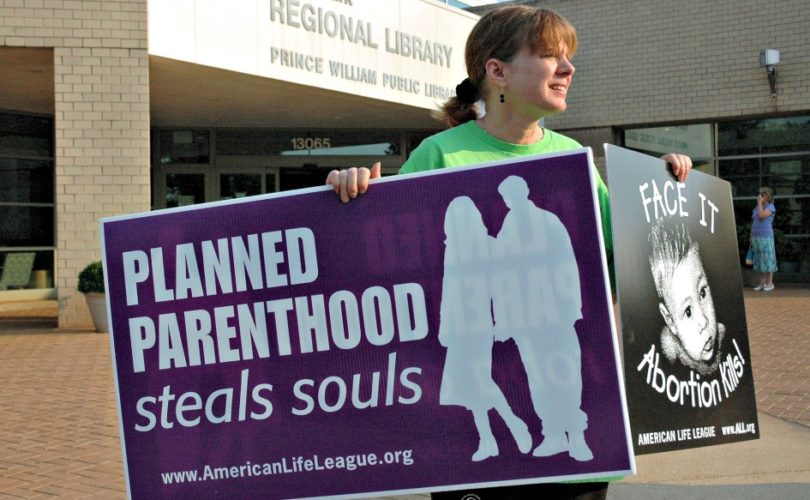 WASHINGTON, D.C., July 23, 2015 (LifeSiteNews) — Two days after a second video revealed a senior Planned Parenthood official discussing the organization’s practice of harvesting of fetal body parts, bills to temporarily defund the abortion giant have been introduced in both chambers of Congress.

Black, a former nurse, said on the House floor, “I eagerly await the findings of this forthcoming investigation, but you know what, Mister Speaker? No matter what it reveals, here’s the truth – Planned Parenthood has made a business out of destroying that which God has created.”

“It performs over 327,000 abortions a year, all while receiving roughly $500 million in annual funding from the taxpayer dollar. The one-sided relationship between Planned Parenthood’s ever-growing bank account and American taxpayers must be severed.”

In the Senate, James Lankford, R-OK, introduced the sister bill to Black's — S.1836. But while Black's release focused on the outrage surrounding the Center for Medical Progress' undercover videos, Lankford's release said temporarily defunding Planned Parenthood “would allow more federal dollars to go toward organizations like community health centers, which serve low-income populations and provide direct health care to women across the country.”

“The recent videos uncovering Planned Parenthood’s inhumane abortion practices have hit a nerve with many Americans,” Lankford said in a statement. “While the government investigates Planned Parenthood to determine if their practice of adapting their abortion procedures to harvest the organs of children violates federal law, they should not continue to receive taxpayer money.”

Both bills have exceptions that would allow funding for abortions consistent with the longstanding Hyde Amendment — for use if pregnancies are the result of rape or incest, or if the mother's life is in danger.

Planned Parenthood would be allowed to receive federal funding under the bill if “Planned Parenthood Federation of America [PPFA] affiliates and clinics” are able to “certify” that they “will not perform, and will not provide funds to any other entity that performs, an abortion during such period.”

Many Planned Parenthood affiliates and clinics recommend abortions, but do not “provide funds” or “perform” abortions. However, a GOP Hill aide clarified to LifeSiteNews that “all PPFA tentacles lose funding if one of them does abortions.”

Likewise, a GOP Senate aide told LifeSiteNews, “In order to continue receiving taxpayer funding, Planned Parenthood would need to certify to the Department of Health and Human Services (HHS) that they and their affiliates and clinics are no longer going to perform abortion services. If Planned Parenthood or any affiliate or clinic of Planned Parenthood breaks that certification agreement, HHS can receive that funding back.”

Should the bills become law, and they are violated, “the Secretary of Health and Human Services and the Secretary of Agriculture shall seek repayment of any Federal assistance” to Planned Parenthood clinics and affiliates.

Defunding Planned Parenthood may not be easy. According to a Government Accountability Office (GAO) report published in March, approximately 80 percent of the grants received by Planned Parenthood in 2012, or $401,290,000, were through state and federal partnerships, such as Medicaid and CHIP.

At the time, GAO's Director of Health Care, Dr. Marcia G. Crosse, told LifeSiteNews that “we are not able to differentiate what portion of that funding is federal, and what portion is state funds. And the contributions to those programs vary by state.”

According to the GAO, the abortion company received $96,180,000 from programs exclusively funded by the federal government in 2012.

After Black's bill was introduced, Republican Reps. Sean Duffy of Wisconsin and Trent Franks of Arizona requested an extended time of special order on the House floor for statements about the growing controversy surrounding Planned Parenthood's fetal harvesting practices.

In Franks' closing statement to the special order, which was initiated by Duffy and extended by Franks, the leading pro-life congressman said that “the real question is: Does abortion take the life of an innocent child?”

“If it doesn't, Mr. Speaker, then I'm willing to stop talking about it. But if it really does take the life of a child, then those of us in this chamber … stand in the midst of the greatest human genocide in the history of the world,” said Franks.