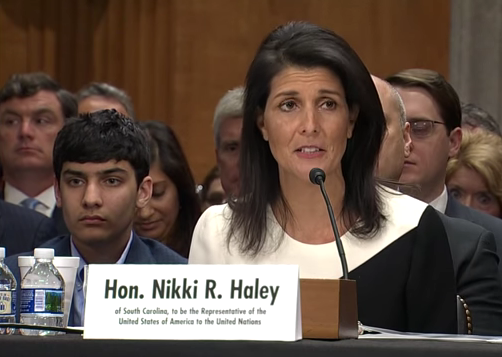 January 20, 2017 (C-Fam) – President-elect Donald Trump’s nominee for United States UN Ambassador, Nikki Haley, repeatedly asserted her pro-life views during her Wednesday confirmation hearing before the Senate Foreign Relations Committee.  The South Carolina Governor promised to be a force for reform of the UN system if approved for the position.

“I am strongly pro-life,” Haley said in response to questions from Democratic Senators Jeanne Shaheen (D-NH) and Cory Booker (D-NJ) regarding her support for international family planning.

An observer at the hearing told the Friday Fax, “Haley exuded confidence and grace throughout more than four hours of questioning, patiently answering the same question several times as Senators came and went.”

Senator Shaheen pressed Haley for a commitment not to equate support for family planning with abortion, just as she did in last week’s confirmation hearing for Secretary of State nominee Rex Tillerson.  This was in reference to the Mexico City Policy, which restricts family planning funding from foreign groups that promote or provide abortions, and which pro-life groups are urging President-elect Trump to reinstate.

The assertion that abortion is not considered to be a method of family planning is consistent with international agreements, such as the 1994 International Conference on Population and Development.  But since most of the largest foreign family planning organizations also promote abortion, the policy would make them ineligible for federal funds unless they ceased to do so.

Senator Shaheen asked Haley to continue to support the work of the United Nations Population Fund (UNFPA), repeating that their family planning work was “a very different issue” from abortion.

Governor Haley expressed support for women having knowledge of and access to family planning methods while reiterating her pro-life principles.  Neither she nor the Senators mentioned the Mexico City Policy directly.

Senator Booker also raised questions about Haley’s support for lesbian, gay, bisexual, and transgender (LGBT) rights, recalling how the Obama administration and outgoing UN Ambassador Samantha Power had specifically championed that cause.  Haley responded that she opposed “discrimination of any kind,” both at home and abroad, but did not specifically refer to LGBT persons or LGBT identity as a human rights category.

Many lawmakers spoke of the need for UN reform to return the organization to its original purposes as established in the aftermath of World War II.  Haley cited her reforms as governor of South Carolina and promised to confront corruption and waste, while insisting that she did not favor a “slash and burn” approach through indiscriminate funding cuts.

As the UN’s largest donor government, the U.S. has great influence on its operations, but the issue of the UN’s influence at home was also raised in the hearing.  Several lawmakers urged Haley to commit to ensuring that all UN decisions be approved by Congress, specifically, the Senate, before being incorporated into U.S. policy.

While President-elect Trump’s new policies have yet to be announced, many in the pro-life community regard Governor Haley’s nomination as a good sign.  Susan Yoshihara, C-Fam’s senior vice president for research, told McClatchy news, “Nikki Haley has a solid pro-life background, and we are hopeful.”