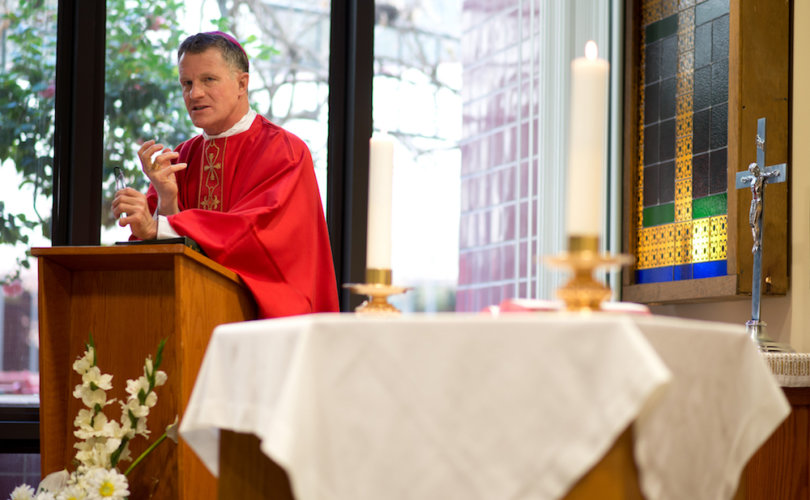 BALTIMORE, Maryland (LifeSiteNews) – The newly elected head of the United States Conference of Catholic Bishops (USCCB) has come under fire from the left for his continuing assertion that there is a link between the clergy sex abuse scandal that has rocked the Church in recent decades and the presence of homosexual priests within her ranks.

Archbishop Timothy Broglio, who will assume the role of USCCB President at the close of the U.S. bishops’ annual fall gathering, told Military.com in 2018 that “There is no question that the crisis of sexual abuse by priests in the USA is directly related to homosexuality. [Ninety percent] of those abused were boys aged 12 and over. That is no longer pedophilia.”

In a press conference shortly after his election on Tuesday, Broglio indicated that he continues to stand by his 2018 statement. “It’s certainly an aspect of the sexual crisis that can’t be denied.”

— Article continues below Petition —
PETITION: Supreme Court must defend religious liberty of Christians who refused to bake gay-wedding cake
Show Petition Text
4622 have signed the petition.
Let's get to 5000!
Thank you for signing this petition!
Add your signature:
Show Petition Text

“That’s certainly not to point a finger at anyone,” he continued, “but I think it would be naïve to suggest that there’s no relationship between the two.”

Leftist Catholic journalists and LGBT activists within the Church were quick to express dismay over Broglio’s election and attempted to discredit his statement, claiming that no such link has ever been proven.

“Asked about prior comments that gay clergy were responsible for the Catholic clergy abuse crisis, new US Catholic bishop president Archbishop Broglio claims: ‘It’s certainly an aspect of the sexual crisis that can’t be denied,’” noted National Catholic Reporter news editor Josh McElwee before asserting, “Academic studies have found no such relationship.”

Asked about prior comments that gay clergy were responsible for the Catholic clergy abuse crisis, new US Catholic bishop president Archbishop Broglio claims: “It’s certainly an aspect of the sexual crisis that can’t be denied.” Academic studies have found no such relationship.

America Magazine’s Kevin Clarke echoed McElwee’s assertion, “A study released in 2011 by the John Jay College of Criminal Justice, commissioned by the bishops, had found that homosexuality was not a cause of abuse by priests, which researchers argued were crimes of opportunity by pedophiles.”

New Ways Ministry (NWM), a group whose stated purpose is “Seeking justice & reconciliation for LGBTQ+ people & their families in the Catholic Church,” issued a series of tweets similarly disparaging the new USCCB head:

In his first press conference, the new president of the U.S. Conference of Catholic Bishops has repeated the false claim that homosexuality is a cause of sexual abuse in the church.

The newly-elected Archbishop Timothy Broglio continues to promote this false claim despite it being debunked numerous times. This is just one harmful claim within his strident history of opposing LGBTQ equality.

2/4 The newly-elected Archbishop Timothy Broglio continues to promote this false claim despite it being debunked numerous times. This is just one harmful claim within his strident history of opposing #LGBTQ equality. #USCCB22

4/4 At a press conference yesterday, Archbishop Broglio was asked about his previous comments on the connection between homosexuality and sexual abuse by priests. He said: “I think it’s certainly an aspect of the sexual abuse crisis that can’t be denied…” #USCCB22

Claims that professional studies have found that homosexual clergy are not the major source clerical sexual abuse are based on misinterpretations of the John Jay Report. While homosexuality was not identified in the report as the cause of the abuse, the vast majority of abuse cases were committed against young males.

Grand jury reports and independent studies have revealed that priests with same-sex attraction have been responsible for 80 percent of clergy sexual predation over the decades.

A LifeSiteNews analysis of the Pennsylvania Grand Jury Report (PJGR) conducted shortly after publication of the report found that the vast majority of reported sexual predator priests were homosexuals, most of whom preyed on teenage boys. Nearly three-quarters of the offending priests were homosexual, while only about a quarter were heterosexual.

Fewer than three percent of the victims were adults, and of those, most were young seminarians.

The numbers strongly suggested that the sexual abuse crisis within the U.S. Catholic Church stems from homosexuality, not pedophilia.

The statistics which emerged from the PGJR were found to be remarkably in line with 2004’s John Jay Study commissioned by the USCCB, which was national in scope. That study found that 81 percent of victims of sexual abuse by priests were male and 78 percent of those were post-pubescent.