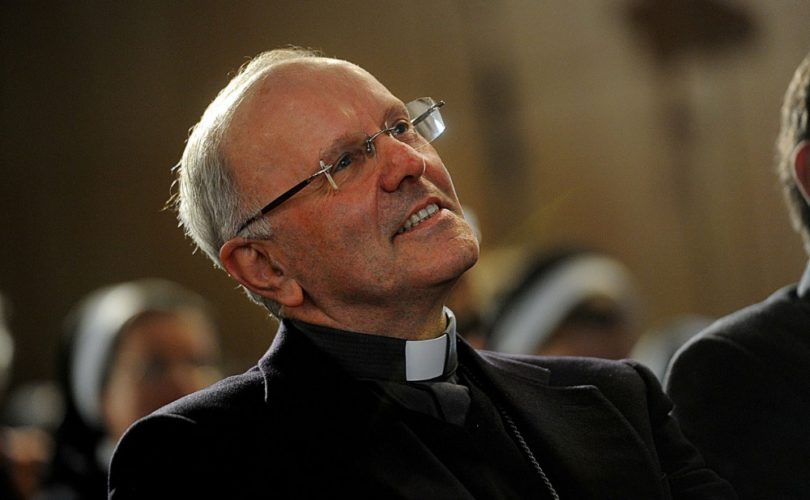 Bishop Nunzio Galantino is the new president of the Administration of the Patrimony of the Apostolic See.http://chiesacattolica.it

On June 22, the Vatican announced Bishop Nunzio Galantino, 69, as the new president of the Administration of the Patrimony of the Apostolic See (APSA). He replaced Cardinal Domenico Calcagno, who turned 75 in February.

Pope Francis told Reuters news service a week earlier that he was looking for a candidate who displayed an “attitude of renewal.”

“I am studying candidates who have an attitude of renewal, a new person after so many years,” he told his interviewer. “Calcagno knows the functioning well, but perhaps the mentality has to be renewed.”

However, critics of the new APSA chief believe Galantino’s attitude toward doctrine is in need of renewal.

In 2014, when he was the secretary-general for the Italian Bishops’ Conference, Galantino told a interviewer, “In the past, we have concentrated exclusively on (saying) “No” to abortion and euthanasia. It can’t be like this, between (birth and death) there is a developing existence.”

Galantino indicated also that he did not feel common cause with pro-lifers who witness outside abortion businesses.

“I do not identify with the expressionless faces of those who recite the rosary outside the clinics who practice interruption of pregnancy  (‘l’interruzione della gravidanza’), but with those young people who are opposed to this practice and strive for the quality of life of the people, for their right to health, to work,” he said.

In response, John Smeaton of England’s Society for the Protection of the Unborn Child wrote an open letter to Galantino asking him to retract his statements and to meet with him.

In 2017, Galantino was upbraided by Cardinal Gerhard Müller, who had recently been ousted as prefect of the Congregation of the Doctrine of the Faith, for calling Martin Luther’s rebellion against the Catholic Church the work of the Holy Spirit.

“The Reformation corresponds to the truth expressed in the saying ‘Ecclesia semper reformanda,’” Galantino is quoted as saying. “It was the same Luther who did not make himself the cause of the Reformation, writing: ‘while I was sleeping, God was reforming the Church.'”

In response, Cardinal Müller published an article in La Nuova Bussola saying it was “unacceptable to assert that Luther’s reform ‘was an event of the Holy Spirit.’”

“On the contrary, it was against the Holy Spirit,” the cardinal continued. “Because the Holy Spirit helps the Church to maintain her continuity through the Church’s magisterium, above all in the service of the Petrine ministry: on Peter has Jesus founded His Church (Mt 16:18), which is 'the Church of the living God, the pillar and bulwark of the truth' (1 Tim 3:15).”

Müller added, “The Holy Spirit does not contradict Himself.”