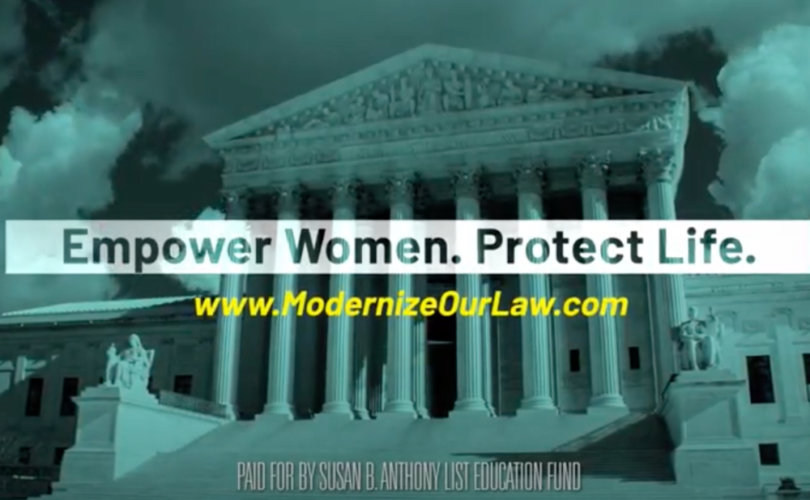 The ads highlight scientific advances that reveal the humanity of unborn children and the extremism of U.S. policy that allows unlimited late-term abortion up to birth. The ads are part of the group’s overall $10 million campaign to educate Americans about the stakes of the Dobbs case.

The ads feature a young woman, Annie Fitzgerald, who was adopted, as well as Dr. John Bruchalski, a practicing OB/GYN who regrets having performed abortions, and Dr. Casey L. Delcoco, a family practitioner who cares for pregnant mothers and their children.

The flurry of ad spots will air on broadcast and cable stations in the Washington, D.C. media market including CBS, ABC, NBC, Fox News, Newsmax, CNBC, and CNN networks. In addition, the ads will circulate via targeted text and digital ads in nine battleground states during the weeks of November 17 and November 29.

The ads are part of an ongoing ad campaign and available for viewing at: modernizeourlaw.com.

“Science continually affirms the humanity of unborn children. By 15 weeks, children in the womb have fully formed noses and lips, eyelids and eyebrows; they can suck their thumb, and even feel pain,” said SBA List President Marjorie Dannenfelser.

“The U.S. is one of seven nations – including China and North Korea – that allow late-term abortion on demand more than halfway through pregnancy, well after unborn babies feel pain. Americans overwhelmingly reject such extreme policies, yet their elected lawmakers are shackled to Supreme Court precedents that in effect allow unlimited abortion up until birth – these are needlessly divisive and decades out of step with medicine and technology.”

“It’s time to return this issue back to the people to decide through their elected representatives,” added Dannenfelser. “We hope the Court will soon allow all states to modernize our laws and protect women and children.”

The U.S. Supreme Court will hear oral arguments on December 1, and will address whether all pre-viability abortion limits are unconstitutional.

SBA List and its affiliates will spend $72 million during the 2021-2022 election cycle.

SBA List is a network of 900,000 pro-life Americans nationwide, dedicated to ending abortion by electing national leaders and advocating for laws that save lives, with a special calling to promote pro-life women leaders.