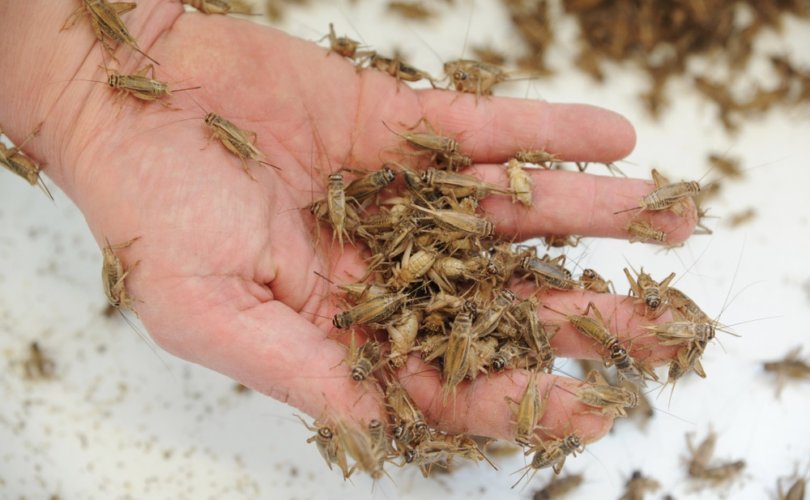 (LifeSiteNews) — A recent feature video released by Business Insider highlighted the farming of crickets for human consumption, echoing ongoing calls from environmentalists hoping to save the planet by replacing beef with bugs in the American diet.

Posted Friday on Twitter, the seven-minute video gives a glimpse into the work undertaken at Canada’s Entomo Farms, which according to the outlet harvests roughly 50 million crickets per week to use in food for human consumption.

“We went inside Canada’s Entomo farms to see how they turn crickets from bugs to brunch,” the narrator states.

According to the video report, the crickets raised at the farm can be ground down into a powder that can be used like flour, or consumers can “snack on them whole like chips.”

“Though you may be thinking this is a strange choice for food, crickets actually contain more protein than beef without any of the environmental damage,” the video’s narrator said.

Entomo Farms executives wearing COVID-19 masks told Business Insider the impetus behind cricket farming has to do with environmental “sustainability” and moves to deal with alleged overpopulation.

“A lot of manufacturers and entrepreneurs were looking for safer, more sustainable protein sources to add to their product,” Lauren Keegan,  vice president of sales and marketing at Left Coast Naturals and former CEO and adviser at Entomo Farms, told Business Insider. “For us, it’s been quite a boon to our business as a result.”

Entomo Farms co-founder Darren Goldin told Insider his company is about “reimagining how we can feed a population of 9 or 10 billion people on an overcrowded planet.”

Current population estimates from the United Nations suggest the world population will exceed 10 billion by the end of the century. However, that number has been challenged by some including Tesla CEO Elon Musk, who has repeatedly pointed out that many countries are experiencing below-replacement population rates.

Regardless, Entomo Farms executives told Insider they’re hoping to triple production of the crunchy insects within the year.

READ: Snack food made with cricket protein now being sold in Canadian supermarkets

Meanwhile, Entomo Farms isn’t the only Canadian company mass-producing crickets in a bid to feed the allegedly overpopulated planet.

Aspire Food Group aims to produce 10 tons of crickets annually for distribution in both Canada and the United States, and states on its website that it is “pioneering a movement to produce exceptionally high-quality protein with a low environmental footprint.”

Moves to demonize traditional farming and normalize the consumption of crickets and other insects have ramped up in recent years.

RELATED: The Dutch gov’t is at the forefront of the World Economic Forum’s totalitarian food revolution

Microsoft founder Bill Gates, who is considered the largest private owner of farmland in the United States and in 2019 invested $100,000 into an insect-farming start-up, has stated that “all rich countries should move to 100% synthetic beef.”

Likewise, George Monbiot, a British writer and environmental activist, told Irish state-funded media outlet RTE last month that agriculture destroys “habitats,” is one of the leading causes of “climate breakdown,” and pollutes the air and water.

“We need to switch toward other sources of food,” Monbiot said, arguing that “eating meat and milk and eggs is an indulgence we cannot afford.”