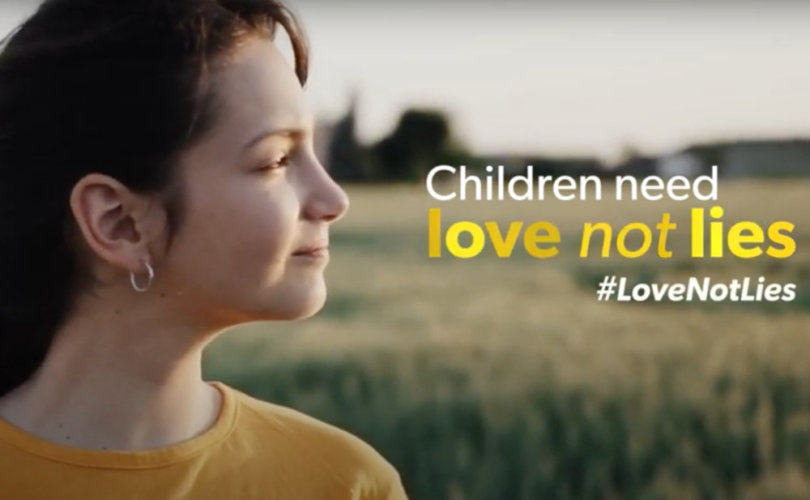 “Children need love, not lies,” states VfJUK in the new video warning of the “casual inhumanity” whereby, in promoting gender ideology and sex reassignment, children are treated “as subjects in a social experiment driven by ideology, not compassion.”

The organization reveals some lesser-known facts about gender reassignment, commenting on the “epidemic of psychosexual identity dysfunction” which exists today. Far from being properly helped, children suffering from “gender dysphoria” are being “exploited by activists, and told lies that they were born in the wrong body, encouraging them to deny their actual sex.”

As a result, children have been subjected to “life-changing ‘transitioning’ treatment without proper assessment,” as gender activists have widely promoted measures such a sex-reassignment, and puberty blockers.

The video warns that these invasive procedures are performed without investigating the true nature of a child’s gender confusion, which could be caused by “trauma, sexual abuse, autism and mental health issues.”

Indeed, a former psychologist from the U.K.’s leading gender clinic revealed that “therapy is not an option in this service.” A previous governor of the Gender Identity Development Service (GIDS) at the Tavistock and Portman NHS Foundation trust, added that “the treatment of gender dysphoric children has become politicised and, in many ways, operates outside good medical practice.”

Last year, 1,946 children were referred to GIDS at Tavistock and Portman. However, the video notes that 1,362 of these children “would have found happiness in their birth sex if just given love, understanding and affirmation.”

Between 2019 and 2020, 2,728 children in the UK were referred to GIDS, the majority being prescribed “puberty blockers.” A huge 97% of children who receive such drugs “progress to hormone treatment” as teenagers. These children, Voice for Justice states, are “the collateral damage of Gender Ideology.”

“Institutionalized child abuse,” which Dr. Michelle Cretella, the director of the American College of Pediatricians, described pushing such treatment on children.

Voice for Justice’s warning has recently been vindicated by the legal victory of Keira Bell. Now 23, Bell had begun taking “puberty blockers when she was 16, was injected with testosterone at 17 and had a mastectomy aged 20.”

However, the Daily Mail reported, “She claimed she was treated like a ‘guinea pig’ at the clinic, and said doctors failed to carry out a proper psychiatric assessment and should have challenged her more over her decision to transition to a male as a teenager.”

Bell took her case to the High Court, which on Tuesday ruled that children under 16 are too young to consent to transitioning drugs, or puberty blockers.

The court also ruled it “highly unlikely” that children 13 or under could competently consent to such drugs, adding it was “doubtful” that children aged 14 or 15 could properly understand and appreciate the gravity of the process either.

Speaking to LifeSite, Reverend Lynda Rose, the CEO of VfJUK, said that “while we welcome the ruling in the Keira Bell case yesterday, we believe it doesn’t address the real and fundamental problem that children are today being given highly confusing teaching in school from as young as 3, with the misleading and inaccurate message that gender is a matter of choice, and not biology.”

“As part of growing up, children go through phases,” Rose continued. “Many girls, for example, are ‘tomboys’, while boys may dive for the pink sparkly cape in the dressing up box and pinch their mothers’ high heels. This is normal. But seeing these behaviours today it has become all too common for adults, who should know better, to whisper the weasel words, ‘Gender is choice, not biology … have you ever thought you might be in the wrong body?’”

“For impressionable, vulnerable and ‘unhappy’ young children, feeling adrift in a vast and unfriendly ocean, such a suggestion can come like the offer of a much-needed lifebelt,” she explained. “These are the lies that weave their way into the minds of ‘lost’ children — but what they really need is simply love, affirmation and support. At all cost, children must be protected from harmful suggestion, and from the consequences of making life-changing, irreversible, and damaging choices — until such time as they really can understand what they are choosing … and what it is they are giving up.”

A study published in the American Journal of Psychiatry in 2019, originally claimed to show that “gender-affirmation” treatment improves transgender mental health. The study was widely acclaimed in the media, with headlines alleging that gender reassignment surgery was a benefit.

However, the authors retracted their claims this year, saying that “the results demonstrated no advantage of surgery in relation to subsequent mood or anxiety disorder-related health care.”

Moreover, the authors also noted that gender-confused people who undergo “gender-reassignment” surgery are more likely to be treated for anxiety disorders than those who don’t have such surgery.

In 2014, the former chief psychiatrist of Johns Hopkins University, Dr. Paul McHugh, wrote that “policy makers and the media are doing no favors either to the public or the transgendered” by not treating transgender “confusions … as a mental disorder that deserves understanding, treatment and prevention.”

According to McHugh, the “sense of being transgendered constitutes a mental disorder in two respects.” The first, he says, is that “it does not correspond with physical reality.” The second, more importantly, is that not treating transgender disorder properly “can lead to grim psychological outcomes.”