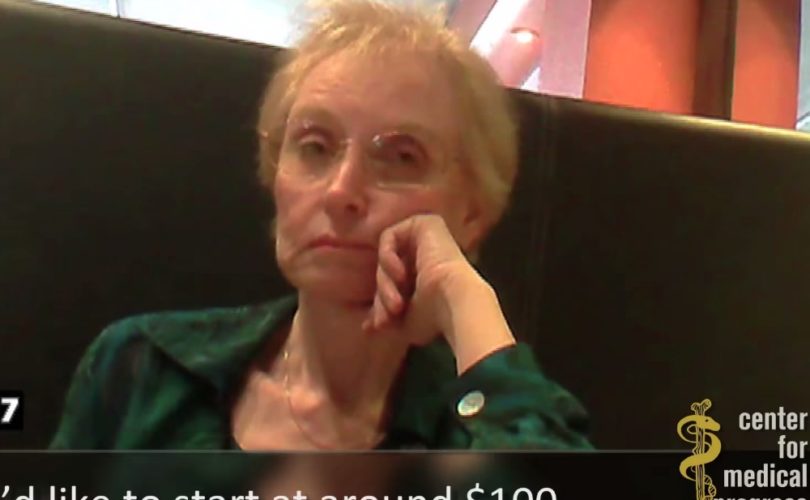 In the video, released by the Center for Medical Progress (CMP), Dr. Mary Gatter, president of Planned Parenthood Federation of America’s for-profit Medical Directors’ Council, is seen haggling over prices of fetal parts.

When Gatter initially asked for $75 per part, the undercover investigators countered with $100 — which Gatter readily accepted. These negotiations came after Gatter said she didn't want to make an opening offer because “in negotiations, the person who throws out the first figure is at a loss, right?”

“I don't want to lowball,” she said moments later. Towards the end of the video, Gatter jokes that she “wants a Lamborghini.”

Gatter also said that “we're [Planned Parenthood] not in it for the money, and we don't want to be in a position of being accused of selling tissue and stuff like that.”

At one point in the video, Gatter says she “would not object to asking Ian, who's our surgeon who does the cases,” if he would allow clinics to violate “the protocol” Planned Parenthood uses with regards to how abortions are done.

Gatter said it was “kind of a specious little argument” to hold to protocol on how an abortion is done.

According to Richards, CMP's video showed poor “tone” by the Planned Parenthood official, but no illegal activity by the abortion giant. Fetal parts can be legally harvested if they are not done for-profit, which is what Richards claims.

“As we all know by now, Planned Parenthood does not want to be accused of anything and will steadfastly maintain their innocence even in the face of the most shocking evidence,” he said. “The prices are pure profit that go far and above any real (or imagined) costs [Planned Parenthood] might have in handing over aborted babies to another company's technician.”

“It is the alleged 'costs' that are in fact designed to cover the profit,” claimed Daleiden.

Regarding Gatter's support for lying to women about how an abortion will be done, Daleiden cited 42 U.S.C. 289g-1, and said that “state laws governing consent to medical procedures would also apply.”

Daleiden also pointed out that, despite Planned Parenthood's claims of innocence, the organization is “refusing to produce Dr. Nucatola for the House Energy and Commerce Committee's” investigation. “She admitted to using partial-birth abortions [PBA] — which [Planned Parenthood] has yet to address a week later — and indicated affiliates would be happy to 'do a little better than break even' on fetal tissue sales.”

“PBA and profiting off of baby parts are both highly illegal and it's not surprising PPFA will say anything to try to get away from those charges,” said Daleiden.

Daleiden also responded to a claim from a Planned Parenthood lawyer that his group had lied to the IRS. “CMP's IRS application mirrored our [California] non-profit filing. Our purpose is 'to monitor and report on medical ethics and advances.' This is all we have been doing since formation.”