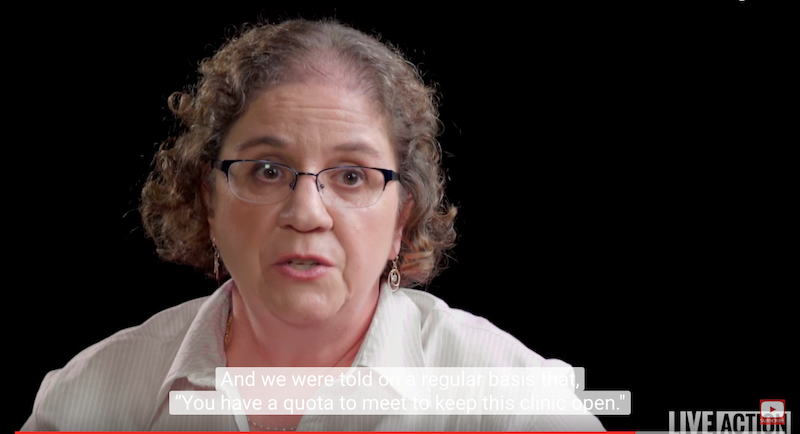 “Every center had a goal for how many abortions were done,” Sue Thayer, a former Planned Parenthood manager, explains in the video. “And centers that didn’t do abortions like mine that were family planning clinics had a goal for the number of abortion referrals.

This video, “Planned Parenthood’s Abortion Quotas,” is the fourth in Live Action's series “Abortion Corporation.” The series has shown Planned Parenthood employees admitting its name is “deceptive” because they don't promote parenting.

“I felt like I was more of a salesman sometimes, to sell abortions,” former Planned Parenthood nurse Marianne Anderson says in the video. “And we were told on a regular basis that, ‘You have a quota to meet to keep this clinic open.’”

She said the focus of her job seemed to be selling abortions rather than “treating people.”

“I trained my staff the way that I was trained, which was to really encourage women to choose abortion, to have it at Planned Parenthood because that counts as – you know, towards our goal,” said Thayer, who previously ran a Storm Lake, Iowa, Planned Parenthood.

She said Planned Parenthood would convince women that abortion was their best choice if they couldn't afford to pay for their initial clinic visit right away.

According to Thayer, they would say, “If you can’t pay 10 dollars today, how are you gonna take care of a baby? Have you priced diapers? Do you know how much it costs to buy a car seat? … Don’t you think your smartest choice is termination?”

In addition to pizza parties, employees could be rewarded for meeting abortion quotas with paid time off or a “clinic manager of the month” award. The latter meant lunch with upper management.

“Planned Parenthood doesn’t have quotas for adoptions. It doesn’t have quotas for prenatal care. But quotas for abortions? Absolutely,” said Lila Rose, president and founder of Live Action. “Planned Parenthood makes a profit off women in the midst of their most difficult experiences and incentivizes ​its staff to take the lives of chil​dren in the womb with pizza parties, paid time off, ​and lunches with upper management.​ It’s time to redirect our tax money toward local health clinics that actually provide real care to women, instead of to Planned Parenthood, a corporation focused on upping ​its abortion numbers.”

Rose predicted Planned Parenthood would deny these findings, noting that it claimed it had retrained thousands of employees to identify sex trafficking after Live Action caught its workers helping people posing as pimps. Former Sherman, Texas, Planned Parenthood manager Ramona Treviño disclosed that this “retraining” was actually a way in which the abortion giant tried to teach staff to recognize undercover journalists.

One of President Trump's pro-life promises during his campaign was that he will defund Planned Parenthood as long as it continues to commit abortions. Congress is on the brink of passing a bill to redirect the half a billion taxpayer dollars Planned Parenthood receives to women's healthcare centers that don't kill pre-born humans.

Live Action is spending $500,000 to share these video exposés with the public.