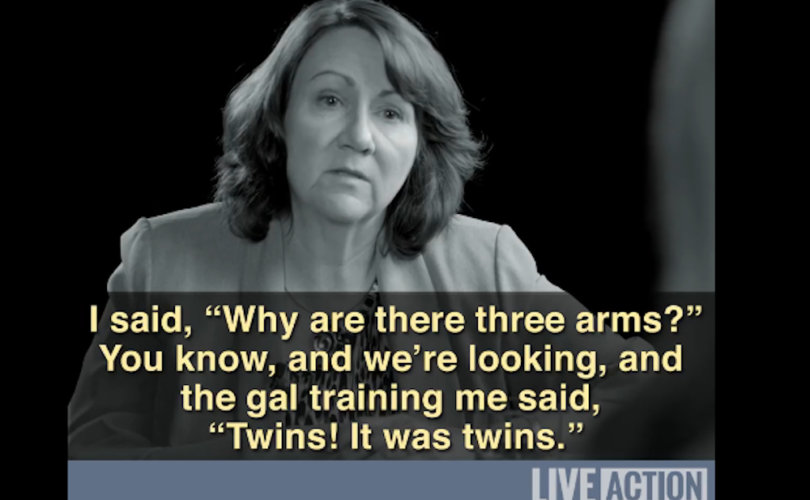 Sue Thayer, who directed a Planned Parenthood in Storm Lake, Iowa, explained how she once saw three arms among the body parts she was being trained to sort.

“The gal training me said, ‘twins! It was twins,'” Thayer told Live Action president and founder Lila Rose. Thayer said she asked, “Do you tell the mom that she had twins?”

The woman training her said, “No, it usually just upsets ’em.”

“When you first start out, they have the trainees stand by the door,” recalled Thayer. This is because people typically “pass out” when they see an abortion for the first time, Thayer was told.

“I didn’t pass out,” she said. “So after, I don’t know, a few were done, they let me start moving closer so I could get to the foot of the bed and be able to see … what was happening” during the abortion.

“The whole procedure only takes just three or four minutes,” said Thayer. Then, “what they call the ‘contents of uterus’ or ‘products of conception’ are emptied into this gallon jar.”

The jar is taken to the “dirty lab” where it is dumped into a “rubber-made colander” and abortion workers “rinse it with this big hose.”

“Then you dump it in this little glass jar and put it on this little shelf that has this bright light and you bring the light over it and you kind of piece it back together and try to see if you got all the parts,” said Thayer.

Once the body parts had been sorted through, they would go into a “big, white porcelain sink,” said Thayer. “And they would dump it in there, rinse it, put the bowl back to use next time and hit the plunger and it would flush – kinda like a toilet. And I just remember standing there thinking, 'all those babies are in the Des Moines sewer system.'”

Later, the Planned Parenthood where Thayer worked would put “those babies in little red bags and with a twist tie and then they’d fling ’em in the freezer…I thought, if there’s a buck to be made, they will sell those.”

In the second video, former Indianapolis Planned Parenthood nurse Marianne Anderson describes what it was like in the “products of conception room” at the abortion facility. After completing an abortion, the abortionist would hold a jar of aborted baby parts under one arm and the dirty instruments in his other hand.

He would “pour” the aborted baby body parts “into a giant sifter, kind of like what you would use like for flour,” Anderson said.

“He would sift through it with his hands,” she said.

“There was one doctor that would sit there and he would sometimes talk to [the aborted child], saying – I’ll never forget him saying, ‘Now, where’s your little arm? I didn’t see – I’m missing this arm,’” said Anderson. As he sifted through the babies' remains, “he’d say – I remember him saying, ‘Oh, there you are! Now, where’s the head and where’s this?’”

“There was another doctor that also visited and he specifically asked for like, an luminary-type light,” she continued, who would reconstruct babies' bodies under it. Anderson said when he did this, she could see the babies' arms and legs and “he would name the parts.”

“The testimonials of these former abortion workers are so powerful,” said Rose. “The stories of the death they witnessed on a daily basis and of the barbaric procedures they saw committed on pre-born children must be heard – especially by those who support abortion without understanding how brutal and inhumane it truly is.”

She said she anticipates Planned Parenthood will deny these testimonies.

“The science is clear: these pre-born children are growing, developing human beings who have beating hearts at just 3 1/2 weeks old,” said Rose. “Taking their lives is the opposite of healthcare. Despite the lies they tell their clients, Planned Parenthood knows they aren’t aborting clumps of cells but innocent little human beings.”

These videos are part of Live Action's “Abortion Corporation” series. It consists of undercover footage inside Planned Parenthood facilities and interviews with former employees.