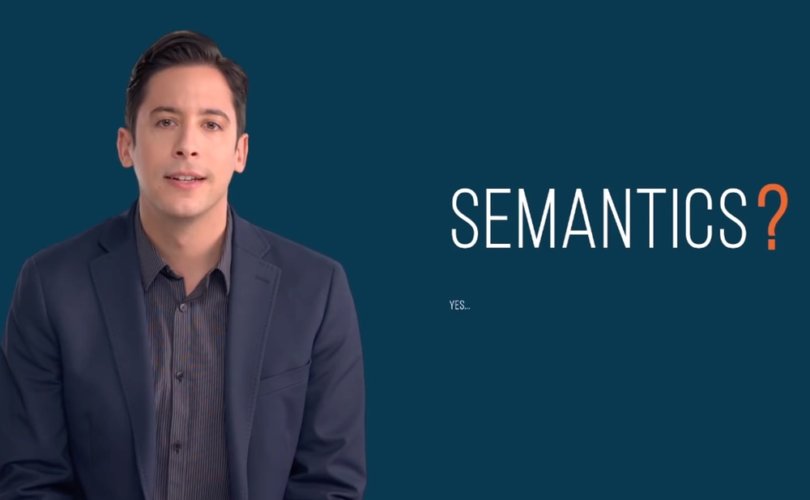 May 3, 2018 (LifeSiteNews) – “The left is winning the culture war” because they are the “masters of words,” conservative commentator Michael Knowles argues in his new video for Prager University (PragerU).

Knowles is a conservative writer and host with Ben Shapiro’s The Daily Wire. His latest video for conservative commentator Dennis Prager’s ongoing series concerns liberals’ use of semantics to obscure and achieve their political and cultural goals.

“Without words, we have chaos. And it starts with the first words—a baby says ‘mama’ to distinguish mommy from daddy,” Knowles opens. “Words shape how we think; they color how we view the world.”

He suggests that liberals understand this point better than many of their opponents, and exploit it for maximum effect. “The left has a special gift for euphemisms—soft words selected to sugarcoat harsh realities so as to make those harsh realities easier for us to swallow,” he continues. “But these soft words are insidious. Their sole purpose is to deceive.”

“Here’s one we hear a lot these days: ‘my truth,’” Knowles adds. But “truth is reality regardless of any individual’s feelings or perceptions. ‘My truth’ is how I perceive things, regardless of how they really are.”

Among numerous other examples, Knowles cites the debate over whether to refer to gender-confused people by their biological sex or the sex with which they “identify,” and the redefinition of marriage to include same-sex couples.

“Very few people in the country suffer from gender confusion, and we should have compassion for those who do,” he grants, “but the left has invested countless funds, time, and energy to make everyone refer to some men as ‘she’ and some women as ‘he.’” Knowles maintains that they do this not out of compassion, but because “so much of the left’s cultural agenda is about blurring—even denying—the natural distinctions between men and women?”

As for marriage, Knowles notes that throughout the vast majority of human history, marriage was understood to be the union of “husbands, men; and wives, women,” and whatever else may be said of same-sex “marriage,” it’s “most certainly not the union of husbands and wives.”

“Once the phrase ‘same-sex’ was placed before the word marriage—that is, once the definition of marriage changed—the debate changed,” Knowles continues. “It became about ‘marriage equality.’ It was suddenly an act of bigotry to limit marriage to husbands and wives.”

Similar euphemisms abound in the abortion debate, where the word “abortion” is commonly replaced with “choice,” literal descriptions of the act are replaced with “terminating a pregnancy,” support for legal abortion is reframed as supporting “reproductive freedom” or “women’s health,” and abortion defenders intensely oppose referring to preborn babies as “babies” or “persons.”

“All this manipulation of language has paid off for the left, because whoever controls the words controls the culture,” Knowles warns. “You can see the consequences everywhere: in politics, in education, in media.”

Knowles ends the video by declaring that conservatives can only reverse the culture’s direction if they begin resisting the terms through which liberals frame every dispute. “It’s time to fight back,” he says. “We should not cede another syllable.”

It remains to be seen whether Knowles’ video will be added to the list of more than 40 PragerU videos YouTube has restricted younger viewers from seeing. PragerU recently appealed its lawsuit against YouTube and parent company Google to the Ninth Circuit Court of Appeals, arguing that the purportedly-neutral platform is targeting them for their political views under false pretenses.