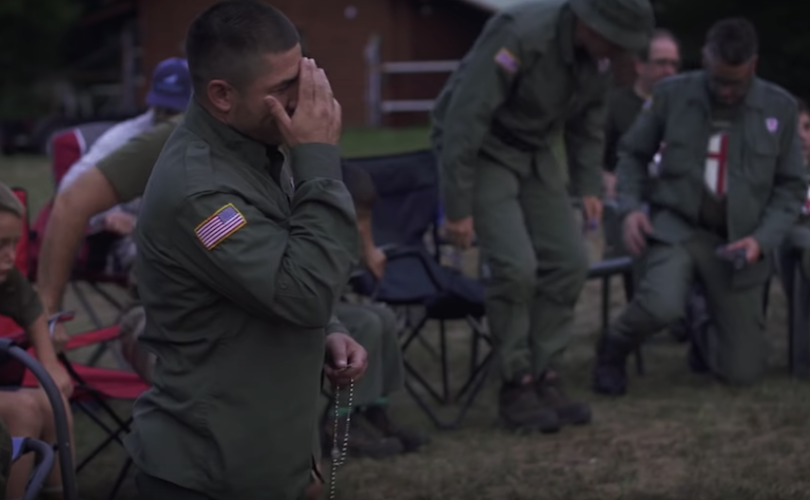 The Troops of Saint George praying the rosary outsideYouTube

KELLER, Texas, October 26, 2018 (LifeSiteNews) – The Troops of Saint George has released an engaging new series of videos highlighting how through its mission to form holy Catholic men and boys, the group is reclaiming authentic masculinity.

Aimed at Catholic families, in particular fathers and sons desiring a closer bond with the Lord and each other, the videos use personal testimonies from those involved in the organization cast against captivating footage of the Troops in action and a dramatic soundtrack.

Clergy, men, and boys are cultivating authentic masculinity together, using the outdoors as a canvas and the Sacraments as the path to light the way, the group’s news release on the video series said.

Fathers tell of how they wanted something different for their sons in their personal accounts, that they were lost and looking for a boys’ group that aligned with their Catholic faith. They recount how their involvement in the Troops allows them to be with their sons and grow in virtue, to “grow into men together.”

“It’s our journey to Christ with our sons, and other men and their sons,” one dad says. “And through using the Sacraments and that outdoor adventure to get there.”

A recurring theme expressed by the fathers is the blessing of having time with their sons.

Boys from the Troops share their experience of fun campouts, and learning about God and how to help people, along with experiencing all the outdoor activities.

“I’d recommend the Troops for fathers who want to grow in our Catholic faith,” a priest chaplain states in one video, “and have experiences of growth in union with other men to help form a bond and a support to learn and know…how to live our faith.”

“I’d recommend it for fathers who want to help their sons connect with other families and other boys,” he says, noting the group provides solid friendships.

The Troops of Saint George (TSG) is a fraternal Catholic nonprofit apostolate for priests, laymen, and young men that combines virtue with outdoor adventure.

Founded in 2013 by Catholic author and professor Dr. Taylor Marshall, the Troops of St. George is based in Keller, Texas, and since its founding it has grown to over 1,300 members in 41 fully chartered troops. Marshall is still a member of the local Dallas/Fort Worth area troop with his sons.

“Boys need formation from their fathers, as well as an environment to cultivate and live out their God-given authentic masculinity,” the group states. “In His creative design, God desired for men to stand as the spiritual heads of their families. The Troops [of] St. George has created a platform for men to both practice and teach the faith to their sons.”

The Troops take part in reverent Masses, pray the Rosary, and go to Confession in outdoor settings.

Members catch fish for Friday meals and practice archery, rock climbing, marksmanship, and survival skills. The approach with each of these activities is one of instilling Catholic virtues and fostering a love for the priesthood and a reverence for the Sacrament of Matrimony.

The Troops also promote support for local parishes, priests, bishops, and the community by being available for works of mercy and service.

Cardinal Burke: ‘The Troops of Saint George safeguard and foster the irreplaceable relationship between fathers and sons’

Fort Worth, Texas Bishop Michael Olson gave approval this past May for the Troops of Saint George to be recognized as an official Catholic apostolate for his diocese, where the group is headquartered.

The following month, Cardinal Raymond Burke praised the Troops, saying the group was “an authentic Catholic apostolate of scouting.”

“The Troops of Saint George, in an excellent way, assists Catholic boys and young men to develop a sound appreciation of nature, in accord with the Law with which God has created all things,” Cardinal Burke said.

“In a particular way,” he continued, “the Troops of Saint George safeguard and foster the irreplaceable relationship between fathers and sons as a fundamental experience of the Fatherhood of God and of His special gifts to men for the good of the family and of all society.”

“Sometimes the Troops of Saint George is compared to the Boys Scouts,” he said. “These videos show that we are something completely different. Our mission is about building saints for our day – forming young men and their fathers who will transform the culture for Christ.”

Brian Squibbs, National Director of Communications and Recruitment, said the world is hungry for truth, and the Troops of Saint George provides an opportunity for boys and young Catholic men to go deeper in their faith while experiencing the outdoors.

“The Troops of Saint George quickens our steps toward holiness by gathering men and their sons, and it uses the sacraments and outdoor adventure to get there,” Squibbs said. “We’re excited about what God’s doing and where he’s guiding this movement.”