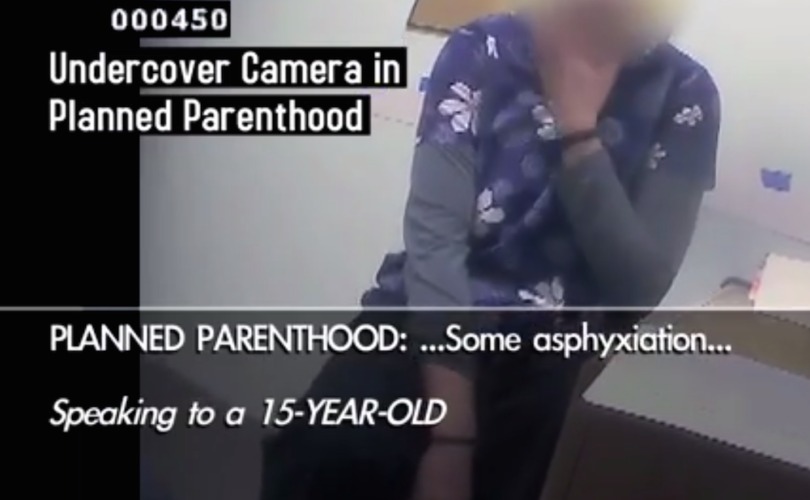 A Planned Parenthood employee in Denver recommends a 15-year-old use S&M sex practices like whipping and asphyxiation.

The counselors lay out in graphic detail a spectrum of sadistic sexual behaviors to the investigators, including “whipping,” “tying up,” and “asphyxiation.”

As one of the Live Action videos shows, a gruesome crime involving asphyxiation recently captured media interest.  Police discovered 16-year-old Jessica Burlew this past January with the corpse of 43-year-old Jason Ash, whom Burlew had strangled to death and mutilated with razor blades in the midst of “a sex game.”

“Planned Parenthood of the Rocky Mountains is already bragging about receiving ObamaCare grants specifically for sex education,” said Lila Rose, Live Action's president.  “Here's an abortion corporation, which gets 45% of its budget from the taxpayers, telling 15- and 16-year-olds not only to have sex, but also to choke each other in the process.  Police should be busting down its door.”

“The Planned Parenthood-approved advice of 'do whatever you want, but just use a safe word' glorifies kids acting out rape scenarios,” Rose said.  “It's extremely dangerous counseling: they're undermining and invalidating the crucially important rule of no means no.”

One Planned Parenthood counselor tells Live Action's investigator that a young girl using words like “stop” when she is uncomfortable “can get mixed up,” resulting in the male partner wondering, “Does she really mean 'stop,' or does she mean, you know, whatever?”  The other concurs: “Usually, a lot of people will say 'stop' even though it feels good, so that's usually not something that is used.”

Live Action is calling on Colorado residents to contact their local officials, including school administrators.  “Parents need to get on the phone right now,” Rose said, “and ask their principals and superintendents, 'Do you have a relationship with Planned Parenthood?  Are you okay with this sort of behavior being pushed on my children?'  This won't stop until people take action locally for their kids.”