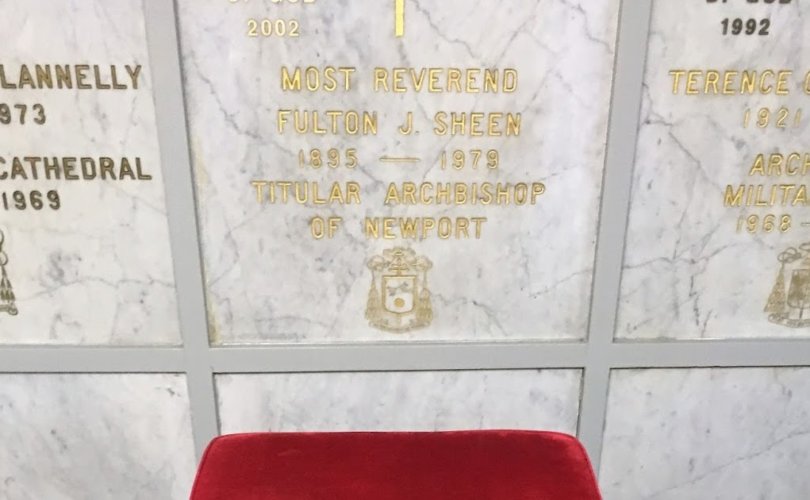 NEW YORK, May 21, 2019 (LifeSiteNews) – The Archdiocese of New York overseen by Cardinal Timothy Dolan continues to refuse to allow the remains of Venerable Fulton Sheen to be transferred to his home diocese of Peoria, Illinois, so that his cause for canonization may continue to move forward.

For the fourth time, the archdiocese appealed a court ruling in favor of Sheen's family, who requested that his remains go to Peoria. Earlier this month, the New York State Court of Appeal ruled in favor of Sheen’s nearest relation, niece Joan Sheen Cunningham, and the Diocese of Peoria, which initiated the late bishop’s canonization procedure.

The Diocese of Peoria expected the venerable to be declared a beatus, or blessed, shortly after he was transferred to St. Mary’s Cathedral, but the process has been suspended for the duration of the nearly three-year-old battle.

Cunningham expressed her astonishment to Church Militant about Cardinal Dolan spending hundreds of thousands of dollars in legal fees to litigate the case.

“They've appealed every time and lost every time. I can't believe they're continuing this,” she said. “We've won every time. I don't know why they just keep going. They just won’t give up.”

The Vicar General for the Peoria diocese told Church Militant that he and the diocese were “sad” that New York is continuing the expensive litigation.

“We are truly sad that New York is again delaying the case, costing money and furthering litigation for what appears to be a case that's been proven to be lost on their part,” he said. “We're also sad that we have to wait for the court to offer another ruling, a fixed ruling that we are confident is again going to uphold Joan Cunningham's desire to transfer the remains of Abp. Sheen.”

Ven. Fulton Sheen grew up in Peoria and was ordained in St. Mary’s Cathedral. He was an Emmy Award-winning televangelist and preacher who shared the truth of the Catholic faith with millions of people. Not only was he orthodox, but he had profound insights into the internal crises of the Catholic Church during the 20th century.

When the New York State Court of Appeal once again ruled in favor of Sheen’s niece against the Archdiocese of New York, the Diocese of Peoria issued a statement emphasizing that Sheen wished to “attain heaven and, if at all possible, sainthood” more than he wished to be buried in New York. It also stressed that the litigation was “extremely costly” and delaying beatification.

“The Diocese of Peoria called upon the New York archdiocese to end their failed legal contestation, which has only resulted in three rulings against them,” the Diocese stated March 5.

“Further appeal is not only unprecedented but extremely costly to all the parties involved. Further litigation will only delay the execution of the Court’s decision,” it continued.

As a matter of fact, Bishop Sheen did not request burial in New York’s St. Patrick Cathedral. According to Crux, the archbishop signed a will five days before his death in 1979 asking to be buried in Calvary Cemetery in Queens.